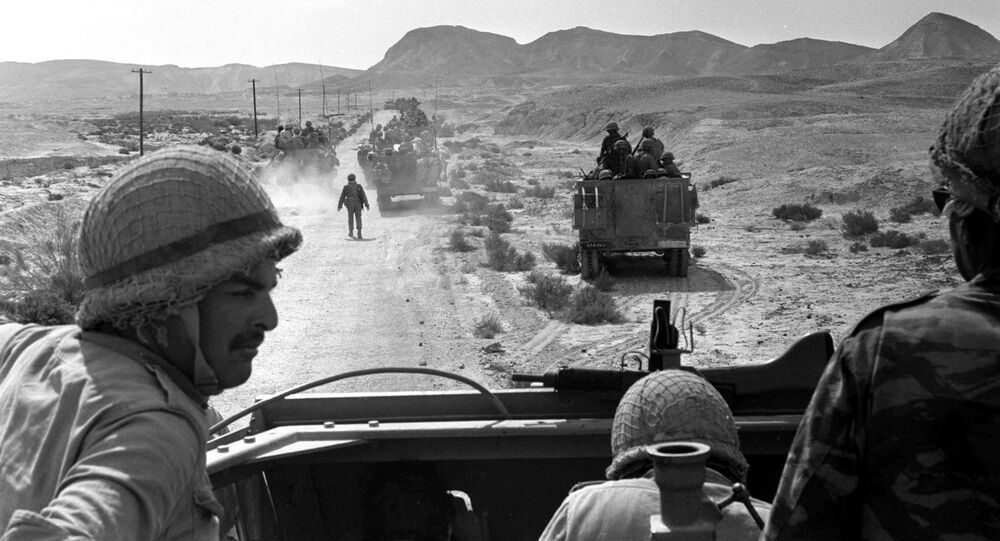 On June 8, 1967, USS Liberty was viciously attacked in international waters by Israeli air and naval forces, killing 34 and injuring 171. Israel alleged the vessel had been attacked erroneously after being misidentified as an Egyptian warship, but many - including survivors of the incident - believe otherwise.

The Six-Day War pitted Israel against the combined might of Egypt, Jordan and Syria — the US, not wishing to inflame tensions with oil-rich Arabian allies, remained neutral. Nonetheless, US Navy intelligence ship the USS Liberty was dispatched to the eastern Mediterranean area to perform signals intelligence collection near the north coast of Sinai, Egypt.

Throughout the early morning of June 8, the ship was overflown at various times and locations by Israeli Air Force aircraft — on some occasions, they flew so close to Liberty propeller noise rattled the ship's deck plating, and pilots and crewmembers waved to each other.

At about 5:45am Sinai time, Israeli Central Coastal Command received a report from an aerial naval observer that a ship — "apparently a destroyer" — was sailing 110 kilometers west of Gaza. A mere 15 minutes later, the same naval observer amended his report to state the ship was actually likely a US Navy supply ship. After the naval observer's craft landed, it was determined by around 11am the ship was the USS Liberty. However, at 11:24am, the Israeli Chief of Naval Operations was informed the Egyptian city of Arish was being shelled from the sea.

© AFP 2021
This file photo taken on March 1, 1967 shows Israeli airforce Dassault Mirage III fighters flying over Israel during a training three months ahead of the Six-Day Arab-Israeli war.
At 11:45 am, another report arrived at Supreme Command saying two ships were approaching the Arish coast. The shelling and ships reports were passed from Supreme Command to Fleet Operations Control Center, who took them seriously — at 12:05pm three torpedo boats were ordered to patrol in the direction of Arish. Chief of Staff Yitzhak Rabin — later Israeli Prime Minister — reiterated a standing order to sink any unidentified ships in the area, but advised caution as Soviet vessels were reportedly operating nearby.

At 1:41 pm, the torpedo boats detected Liberty, and the IAF dispatched two Mirage III fighter jets that arrived at the ship's location at around 2pm. Formation leader Captain Iftach Spector attempted to identify the ship, and communicated via radio to one of the dispatched torpedo boats that the vessel appeared to be a military ship, potentially a destroyer, of unknown affiliation. In a post-attack statement, the pilots claimed they saw no distinguishable markings or flag in evidence — however, a recorded exchange between a command headquarters weapons systems officer, one of the air controllers, and the chief air controller indicate the ship could be American.

Immediately after the exchange, at 1:57 pm, chief air controller Lieutenant-Colonel Shmuel Kislev cleared the Mirages to attack — they duly dove on the ship and attacked with 30-mm cannons and rockets. The crew were caught almost completely unawares, as they were in ‘stand-down mode' —  their helmets and life jackets had been removed. Eight crewmen were killed immediately by the first offensive and 75 were wounded, among them Captain McGonagle — antennas were also severed and gas drums caught fire.

The Mirages left after expending all their ammunition, and were replaced by two Dassault Mysteres armed with napalm bombs, which released their payloads over Liberty and strafed the ship with their cannons, causing much of the ship's superstructure to catch fire. The Mysteres were readying for another sortie when when the Israeli Navy, alerted by the absence of return fire, warned them the target could be Israeli. After the Navy contacted all of its vessels in the area and found none were under fire, the aircraft were cleared to attack again — however, Lieutenant-Colonel Kislev remained concerned by the lack of return fire, and requested one last attempt to identify the ship. When the ship's GTR-5 marking was acknowledged, Kislev immediately ordered the attack stopped, guessing the ship was American.

© AP Photo
A column of tanks of the Israeli Army is seen at an unknown location, on June 8, 1967, on the third day of the Six-Day War between Israel and the Arab states of Egypt, Syria, and Jordan
A ceasefire order was given at 2:20 pm, 24 minutes before the torpedo boats arrived at the Liberty's position — but at 2:35 pm, Liberty was hit by a torpedo launched from one of the vessels, blasting a 12-meter-wide hole in what had been a former cargo hold converted to the ship's research spaces, killing 25 servicemen,and wounding dozens of others, almost all of whom hailed from the intelligence section. The torpedo boats then closed in and strafed the ship's hull with their cannons and machine guns.

It was not until 3:30pm Liberty was confirmed to all Israeli combat divisions to be a US Navy ship. Though severely damaged, her crew kept her afloat, and she was able to leave the area under her own power.

The Israeli government quickly apologised, blamed the attack on a catastrophic series of errors, and offered to compensate the families of those who'd lost their lives. However, while both the Israeli and US governments have conducted inquiries concluding the attack was a mistake, many others, including survivors of the attack and Johnson administration officials, have rejected these conclusions and maintain that the attack was deliberate.

"At the time of the attack, the USS Liberty was flying the American flag and its identification was clearly indicated in large white letters and numerals on its hull. Both were readily visible from the air. There is every reason to USS Liberty was identified, or at least her nationality determined, by Israeli aircraft approximately one hour before the attack. Their sustained attack to disable and sink Liberty precluded an assault by accident or some trigger-happy local commander. Through diplomatic channels we refused to accept their explanations. I didn't believe them then, and I don't believe them to this day. The attack was outrageous," then-Secretary of State Rusk wrote in his autobiography.

© AFP 2021 / MOSHE MILNER / GPO
An Israeli unit moves on the Golan Heights 11 June 1967 during the Six-Day War
Rusk's skepticism is echoed by retired naval Lieutenant Commander James Ennes, a junior officer on Liberty's bridge at the time of the attack, and the classification of the attack as deliberate is the official policy of the USS Liberty Veterans Association, to which survivors and other former crew members belong.

Moreover, Ennes claims all Liberty personnel received firm orders not to say anything to anybody about the attack, and the internal US Navy inquiry into the incident amounted to a "coverup".

In 2002, US Navy Captain Ward Boston, senior counsel for the Court of Inquiry, said the inquiry's findings were intended to obfuscate an attack on a US ship, aimed at "[murdering] its entire crew, that "could not possibly have been an accident".

Furthermore, several books and documentaries have argued Liberty was attacked in order to prevent the US from knowing about Israel's forthcoming attack in and planned occupation of the Golan Heights, which would violate a ceasefire agreement between the warring parties. Conversely, James Bamford suggests in his 2001 book Body of Secrets Israel attacked Liberty to prevent discovery of war crimes, including the execution of up to 400 Egyptian prisoners of war by the IDF taking place at the same time as the attack in the nearby town of El-Arish.

However, an increasingly popular alternative theory suggests the attack was a ‘false flag' designed to be blamed on Egypt and precipitate US entry into the Six Day War on the Israeli side. Whether or not this explanation is accurate, the apparent intended consequence nearly came to pass — President Johnson, believing Egypt to have struck US ships, launched allegedly nuclear-armed aircraft against Cairo from an aircraft carrier in the Mediterranean. The aircraft were barely recalled in time, when it was became clear Israel had carried out the attack. This thesis was supported by Admiral Thomas H. Moorer, former Chairman of the Joint Chiefs of Staff, who chaired an independent investigation into the attack in 2003.