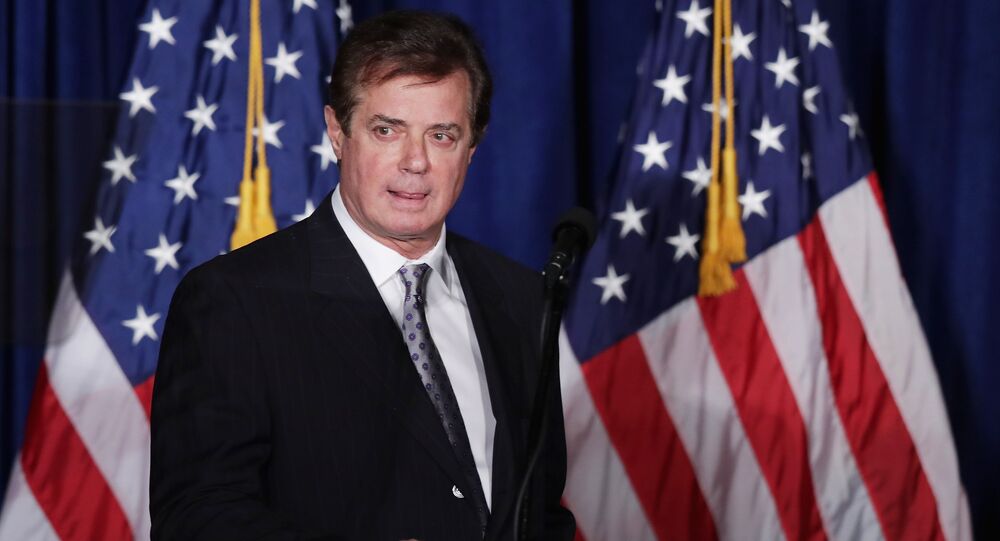 US President Donald Trump's former campaign manager Paul Manafort agreed to a plea deal on Friday and to tell special counsel Robert Mueller what he knows. According to the White House, Manafort's guilty plea has nothing to do with President Trump and relates to his political consulting in Ukraine prior to the Trump campaign.

Sputnik: What role do you think Manafort played in Ukraine and who paid him tens of millions of dollars?

Ric Simmons: Well, that's still somewhat unknown, but he was definitely paid money from someone, probably related to the Party of Regions to do work for them. Essentially, he was a political fixture, he tried to boost the image of the party, tried to sell it to the West, make them more palatable to the West and, probably, possibly involved in election meddling there as well.

© AP Photo / CHIP SOMODEVILLA/GETTY IMAGES NORTH AMERICA
Paul Manafort, Special Counsel Reach Preliminary Plea Deal - Report
Sputnik: Do you think there will be more charges to put forward regarding more individuals in the course of Robert Mueller‘s investigation, is there more to come?

Ric Simmons: There's no question there's more to come. Robert Mueller is supposed to be investigating the Trump campaign's involvement with potential Russian interference with the US elections. Of course, Manafort's charges that he's been now convicted of don't stem to that directly, but Manafort might know a lot about that the connection, if there is any, between the Trump campaign and Russian agents. So the whole point of this plea deal is to get more information on those issues. I think Mueller is really starting to get closer now to any ties that might exist. I do expect to have more charges coming down in the next month or two.

READ MORE: 'I Suspect Manafort Agreed to Testify Against the US President' — Professor

Sputnik: Could Mr. Manafort's case be viewed as foreign meddling in electoral processes in Ukraine? You alluded to it earlier on, what more can you tell us?

Sputnik: Correct me if I'm wrong, I don't think Mr. Manafort has actually been sentenced yet, but do you think that President Trump‘s got a possible point of view with regard to his future pardon? I'm sure he can't pardon him straight away, but probably at the end of his presidency he has got the power to do that, hasn't he?

Ric Simmons: Of course he has, he can pardon him any time, he doesn't have to wait until the sentencing; he could pardon people before they've been charged. So he could pardon him any time and he has issued many pardons already even before the end of his presidency. It's traditional, customary for a president to pardon people at the end of their term, the president's term, but Trump has not followed that custom. It wouldn't surprise many people if he'd pardon Manafort; but the trick here is that it might be too late to pardon Manafort, it's not clear what President Trump would gain from that now. Manafort has already been cooperating with the special counsel, he's already given them some information, probably a lot of information, so pardoning Manafort now will only increase the political vulnerability of the president; it would  make him look like he's trying to cover something up and he would be too late to stop the cooperation that's already happened.

© Sputnik / Alexey Nikolskiy
Oleg Deripaksa Refused to Sing, Compose for Russiagate Investigators
Sputnik: What information do the investigators hope to uncover following Manafort's plea deal? Are they hopeful that there is more information out there that they can utilize for further proof against Trump, for example?

Ric Simmons: A lot of people thought, even as short as a week ago, that Manafort didn't have anything useful to offer; Mueller already has a lot of information from Manafort's deputy Gates, who had been cooperating and it wasn't clear that Manafort had anything useful, but the evidence against Manafort was so overwhelming that they've convicted him of a number of charges already. He wouldn't have made this deal unless there was some kind of new information he has. Clearly he has something, or else Mueller wouldn't have given him this plea deal. So he must have some information; it's almost certainly about someone pretty high up in the Trump campaign, perhaps, not the president but, perhaps somebody close to the president like Jared Kushner, or someone else close to the Trump campaign. We know that Manafort was present at that infamous Trump Tower meeting, which happened in June 2016, where Kushner, Donald Trump Jr. and Paul Manafort met with the Kremlin-linked lawyer to talk about Hillary Clinton [and] negative information [on her]. So, he must have something that is useful to Mueller and almost certainly is useful to Mueller's investigation against the Trump campaign. We don't know what it is, Robert Mueller has been very good at keeping a tight ship, so he's not leaking it all, but I'm sure we will find out in the next couple of months.

Sputnik: My understanding, after speaking to other experts, is that this case is likely to go on past the November midterm elections and a lot of people are actually putting on record that they'd rather have these cases wound up and finalized before the midterm elections. Who's going to gain from the process continuing? Is it basically the longer it goes on, it's going to have a negative effect for the Republican Party?

Ric Simmons: That's interesting, it's been going on for 16 months already. The Republicans, I think, take some political advantage the longer it goes on, because the longer it goes on without anything against Trump, the more it looks like there's nothing there. So I think if it goes on for more than another six months, it's going to look like he's sort of wasting money because he hasn't found anything against Trump.

If he's able to wrap it up relatively soon and does find something against the Trump campaign, I think that will be worse, because as you mentioned, the midterm elections are only a few months away and the timing of any report that he files is critical. If he files a report a few weeks before the midterms, I think that would be very, very damaging to the Republicans to show that there is any kind of collusion, the conspiracy by members of the Trump campaign. That would help the Democrats a lot. It's pretty clear Democrats are going to do pretty well in the midterms and this could make them do very, very well if it turns out that he does release something before the midterms.

The views and opinions expressed by Ric Simmons are those of the speaker and do not necessarily reflect those of Sputnik.