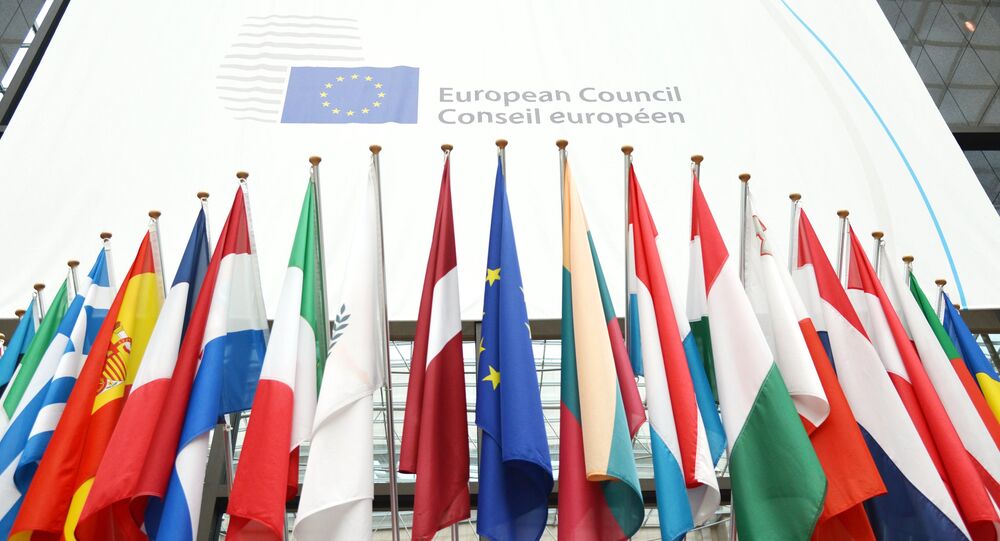 According to the French foreign minister, Jean-Yves Le Drian, France doesn’t want to finance populist Europe. Le Drian also warned that France and Germany are going to agree on a common position on migrants before the EU summit scheduled for 20 September in Salzburg.

France’s foreign minister also mentioned Hungary and Poland, which are making use of EU funds while not complying with the bloc’s principles. Sputnik discussed the issue with Professor Tadeusz Iwiński, ex-deputy of the Polish Sejm.

Sputnik: Do you agree that this is a fatal signal ahead of the fight over the EU budget?

© REUTERS / Vincent Kessler
EU Parliament Adopts Motion to Trigger Punitive Procedure Against Hungary
Tadeusz Iwiński: I agree that this is an important signal. Earlier, French President [Emmanuel] Macron expressed the same ideas, although he didn’t use such sharp words.

During his visit to Luxembourg, Macron said that the EU had made a lot of compromises, but that Hungary and Poland don’t abide by the rule of law. Jean-Ives Le Drian is a very experienced politician who has been defense minister, minister for European affairs; he became head of diplomacy this year.

That’s what was said at the annual meeting of French ambassadors. The issue is that early in May, the European Commission introduced the EU’s draft budget for 2021-2027, which is approximately €1,200 million. The Commission also announced significant cuts for those countries that don’t comply with the rule of law. However, this is not the final decision for the time being.

© AP Photo / Darko Vojinovic
Orban Under Fire as EU Parliament Debates Hungary's Human Rights Record
Sputnik: I’d like to remind you that having introduced the budget for 2021-2027, the European Commission has also cut the amount Poland would receive from the Cohesion Fund by 23%. That is going to result in agricultural sector cuts. How can Poland respond to that?

Tadeusz Iwiński: Despite the announcement of budget restrictions, this budget isn’t that bad for Poland so far. The thing is that some countries that support this, especially France, think that it cannot be that countries where the rule of law is threatened are awarded with much EU money.

The thing is sort of easier with Hungary, as the Orban government has a constitutional majority and has carried out a number of legal changes that the EU isn’t happy with. What is similar in both cases is that neither Hungary nor Poland can be treated as liberal democracies (classically).

These are populist countries and it cannot be that countries that threaten the rule of law are somehow rewarded.

© AP Photo / Darko Vojinovic
Hungary to Protect Borders, Stop Illegal Migrants, Stand Up to EU If Needed - PM
Sputnik: But the head of French diplomacy has claimed that both Poland and Hungary have a utilitarian approach to the EU and choose only what is in their interest — mainly the transfer of money. Are Polish authorities ready to accept this bitter truth?

Tadeusz Iwiński: I doubt that, because there’ll be local and regional elections in a month.

It will be the first real poll during the three years of Prawo i Sprawiedliwość (PiS) as the ruling party. It’s very important, especially when it comes to elections for 16 regional assemblies and elections in big cities.

It often happens that ahead an election, the PiS softens their approach; but considering the situation in the union, I don’t think this solution can be applied ex post. First we need to declare that Poland and Hungary have been breaking the law and then there’ll be some financial penalties. I think that this decision may be made in advance.

Views and opinions expressed in this article are those of Tadeusz Iwiński and do not necessarily reflect those of Sputnik.