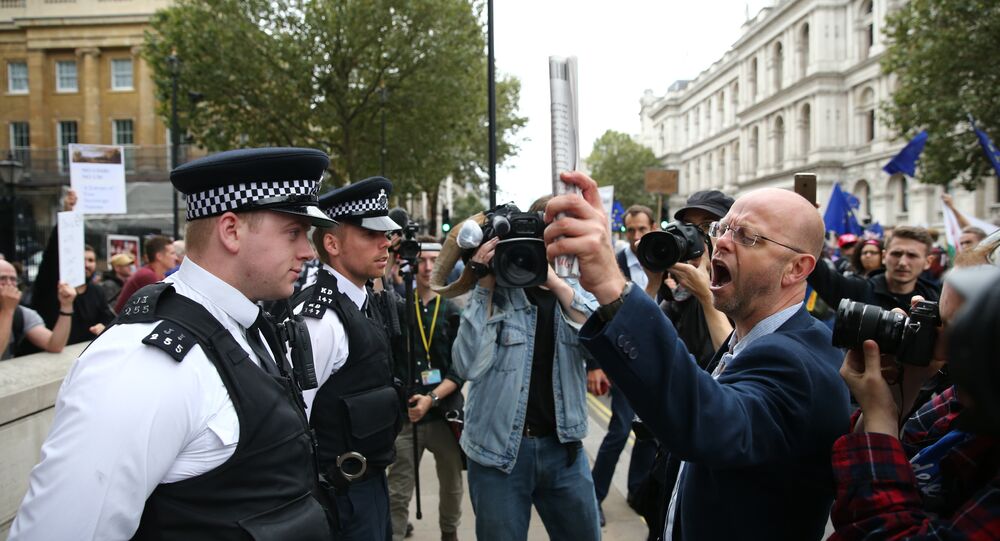 Nicola Sturgeon’s ruling Scottish National Party, which backs independence from the United Kingdom, is targeting 50,000 people in a day of action later this month aimed at building support for secession.

Deputy leader Keith Brown said the SNP has been heartened by new polls showing a rise in support for secession as confidence in a Brexit deal which works for Scotland declines. Its members will canvas people across Scotland on Sept. 29 ahead of an SNP conference on Oct. 7. Scots rejected independence 55 to 45 percent in a 2014 referendum, and since then support for secession has barely moved.

© AP Photo / Matt Dunham
Over 60% of Scots Consider Brexit 'Wrong' Compared to 48% UK Wide - Poll
A Deltapoll survey, however, earlier this month found Brexit could tip public opinion in Scotland towards independence, with 47 percent of Scots said to be in favour of independence, 43 percent against and 10 percent who did not know.

In Britain’s 2016 referendum, Scots voted to stay in the EU but Britain as a whole voted to leave and Brexit is set to happen on March 29 2019. Sputnik spoke to political analyst Joe McGregor on the latest push for independence in Scotland.

Sputnik: How do you think Brexit will impact Scotland?

Joe McGregor: Personally, I only have to look at these political programmes on TV to see Theresa May is in a bit of a pickle, she’s already had a few uprisings in her party that don’t have any confidence in her and she’s asking the nation to have confidence in her while she’s negotiating this.

I know she has people approaching the union to negotiate but at the end of the day the buck stops with her. If she can’t control her own party, how is going to get the best deal possible for everyone in Britain.

© AP Photo / Kirsty Wigglesworth
Scottish Conservative Leader Says Scots to Vote to Stay in UK in 2nd Referendum
Sputnik: Do you think the SNP canvasing can change the Independence debate?

Joe McGregor: Self-determination for any country is surely the only way to go, why would you want another country governing how you live in your country.

In Britain, there’s what 60 million people I think of that there’s something in the region of 40 million that are part of the electorate of that 4 million are in Scotland.

So anyway that Scotland votes just now they’re going to get exactly what they are given, they won’t get anything they vote for and that doesn’t bode well for the future, Scotland won’t ever be able to get the government it deserves or wants.

© AFP 2019 / Andy Buchanan
White House Mocked for Saying Scotland is Not Part of UK in Now-Deleted Tweet
Sputnik: Could we see other parts of Britain follow Scotland’s example with Brexit shambles?

London is of itself its own entity or it likes to believe it is, it believes it is Westminster and Westminster is London. So I could see a huge cry for self-governance.

Views and opinions expressed in this article are those of Joe McGregor and do not necessarily reflect those of Sputnik.