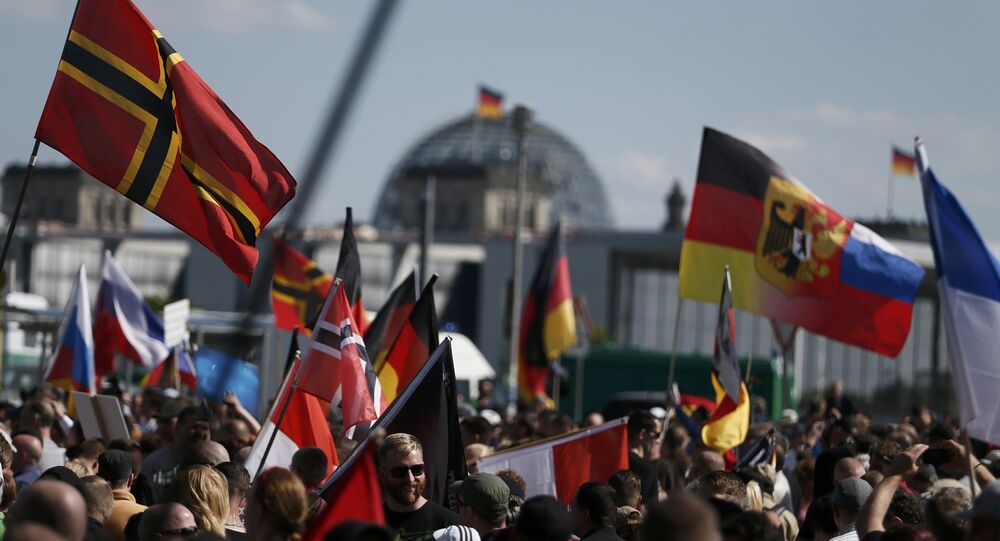 It's Unclear Whether EU Will Fall Apart, But Change is Coming – US Investor

Change is coming, Charles Ortel, a Wall Street analyst, told Sputnik, commenting on the growing discontent with Brussels policies among Europeans and the increasing popularity of nationalist conservative parties. According to the analyst, the EU's swollen bureaucratic apparatus remains a stumbling block in the way of Europe's development.

"The European Union's fate is sealed," Charles Ortel, a Wall Street analyst, investor and writer told Sputnik, drawing parallels with America's Articles of Confederation that operated from 1782 through 1789.

"Associations of governments that do not manifestly benefit citizens by lowering costs of government, and increasing economic opportunities inevitably do fail," he stressed.

Commenting on the rise of right-wing movements and conservative parties across Europe, the Wall Street analyst noted that "rather than accept the term 'right', I believe we are witnessing informed resistance to political 'solutions' that benefit national, regional, and globalist bureaucrats, the cronies and donors."

He stressed that the trend is not limited to Europe but manifests itself in developed nations across the globe, including North America and Japan.

"People who live in these nations are among the most highly compensated on the planet. Therefore, they are easiest to replace with either less expensive workers in places such as China, India, and elsewhere, with robots, or by engineering their roles out of the equation," he said, adding that recently "their home markets are growing slowly, even shrinking, so businesses operating from these places became enamored of chasing foreign growth prospects in emerging markets."

© AFP 2021 / TT NEWS AGENCY / JANERIK HENRIKSSON
Rise of the Right in EU: 'People Don't Want to be Raped and Robbed' – Academic
Obviously, under these conditions, the middle class in these developed nations has finally found itself in dire straits, Ortel remarked.

Returning to Europeans, the Wall Street analyst opined that they had embraced "government bureaucracies and attendant high rates of taxation" for decades, characterizing the system as largely inefficient.

Given all of the above, the European middle class has every reason to be increasingly discontent, especially in light of the recent refugee crisis that has engulfed Europe since 2015.

The writer foresees that "globalists will continue to attempt to paint these rising nationalist movements unfairly as purely anti-immigrant, even racist."

The problem is that the new trend threatens the status quo of globalist governments and their cronies.

"There is abundant evidence that regional and globalist governments actually have worked for the primary benefit of connected insiders and operators of multinational businesses, banks, investment firms and 'educators', NGOs who proselytize and gain from promoting unregulated globalism," he highlighted.

The Wall Street analyst referred to the recent Swedish vote, that has clearly indicated that the neo-liberal agenda has largely lost its "attractiveness" in the eyes of Swedes over the past few years.

Thus, the Sweden Democrats, a left-wing party with a well-articulated patriotic and anti-migrant stance, is set to boost its presence in the national parliament.

Along with Freedom for Austria, the Dutch Party for Freedom, True Finns, Lega Nord, Fidesz and others, the SD throws Brussels' policies into question.

Commenting on the Sweden Democrats getting about 18 percent, Ortel, who discussed the case in his recent op-ed for American Thinker, noted that there had been suspicions that vote counts for the SD and other challengers to the established parties may have been suppressed.

"Compared to expectations in various polls, Sweden Democrats have increased their share of parliamentary seats, but their gains are smaller than these polls indicated," Ortel said, adding that it looks rather surprising.

On the other hand, "resistance to unvetted immigration, particularly involving individuals who seem to have little interest in assimilating peaceably within Sweden, is not surprising at all," the analyst noted.

© AP Photo / Jens Meyer
Hitler Salute Wolves Displayed in Chemnitz Amid Right-Wing Resurgence
He denounced the attempts by Europe's left-leaning media to stigmatize the emergence of conservative and patriotic movements and attempts to equate them with neo-Nazis and neo-fascists.

"The alternative to unregulated 'globalism' is certainly not chaos under the boot of ultra-right wing, even fascist governments, even though these did emerge long ago in Germany, Italy, and elsewhere," he stressed.

According to Ortel, there are clear signs of change in the balance of power within the European economic bloc.

"Whether the EU disappears entirely, or reconfigures with a smaller core is difficult to say in September 2018," he opined. "But change is surely coming, and it could benefit far more people than may be hurt by disassembling non-performing bureaucracies."