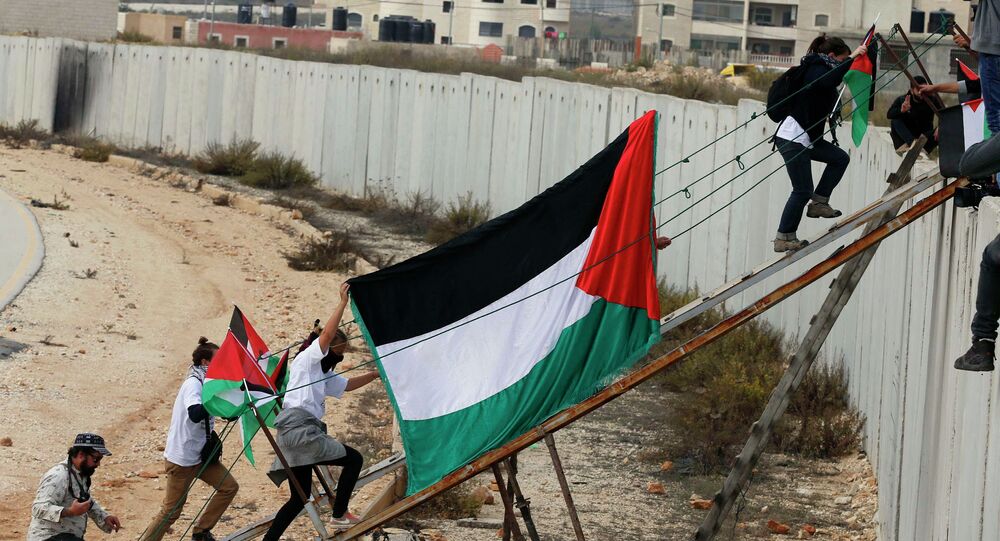 When the US announced Monday it would be closing the Palestine Liberation Organization’s (PLO) Washington, DC, offices, it did so under the aegis of forwarding the Trump administration’s peace plan for the Middle East. One historian told Radio Sputnik Tuesday that the real goal was “to bring about an end to Palestine altogether.”

"[T]he PLO has not taken steps to advance the start of direct and meaningful negotiations with Israel," said US State Department spokesperson Heather Nauert in a statement Monday. "To the contrary, PLO leadership has condemned a US peace plan they have not yet seen and refused to engage with the US government with respect to peace efforts and otherwise."

"The Trump administration will not keep the office open when the Palestinians refuse to take steps to start direct and meaningful negotiations with Israel," US National Security Adviser John Bolton said Monday.

But historian Richard Becker, author of "Palestine, Israel and the US Empire," told Radio Sputnik's By Any Means Necessary Tuesday that there is "no question" US President Donald Trump and his administration are moving far away from any real negotiation, and proceeding to the imposition stage that Israeli Prime Minister Benjamin Netanyahu seems to be pursuing.

Just like Trump's announcement in December 2017 that the US would recognize Jerusalem as the "eternal capital of Israel," was justified as making peace talks easier by taking the city "off the table," Becker told hosts Eugene Puryear and Sean Blackmon that "this is one more step in what appears to be a plan to end Palestine, to bring about an end to Palestine altogether."

​He also pointed out how Jared Kushner, Trump's adviser and son-in-law, had lobbied the Jordanian monarchy to deprive Palestinians of their status as refugees, and how Kushner and US Ambassador to the UN Nikki Haley have all but declared war on the United Nations' agency for providing for Palestinian refugees.

On August 29, United Nations Relief and Works Agency for Palestine Refugees in the Near East (UNRWA) spokesperson Christopher Gunness told Sputnik the organization did not "expect any US funding, and we have built zero US funding into our planning assumptions for next year."

Earlier that month, emails leaked to Foreign Policy showed that Kushner has been engaged in a protracted struggle to deprive the UNRWA of key US funding in an effort to change the legal status of over 5 million Palestinian refugees, Sputnik reported.

Palestinian diplomat Saeb Erekat told reporters in June that Kushner, during a June visit to Jordan, had told the Jordanians the US was ready to stop funding UNRWA altogether and redirect the $300 million allocated to the organization to fund resettlement efforts instead.

"All this is actually aimed at liquidating the issue of the Palestinian refugees," Erekat said, Ynet reported.

The real goal for the Israelis, author and editor Jim Kavanagh told Sputnik last month, is "for the Palestinians to disappear as Palestinians," a goal that resettlement would facilitate.

"It's about unwinding UNRWA; it's about unwinding the Palestinians," he said on Radio Sputnik's Loud & Clear. "They would become, in the Israeli imagination, Syrians and [Jordanians]. They want them to, now, disappear as a national entity and to become just citizens of the states that they're in, and those states then would have the responsibility to take care of them as their citizens."

"This is telling the Palestinians: ‘You have to abolish your national identity and just disappear into Syria and Jordan and Egypt and… forget, ever, about being Palestinian'… it's been a long dream of theirs [the Israelis] to turn Jordan into the Palestinian state," Kavanagh said.

"And so, at the same time, the much-ballyhooed but yet-unseen Trump peace plan for the Middle East, negotiated by his former bankruptcy attorney Jason Greenblatt," who is now Assistant to the President and Special Representative for International Negotiations, "reportedly includes within it the idea that the West Bank would end up… with this kind of limited autonomy that they have now, which is not any kind of sovereignty whatsoever, and that… there might be an agreement with Gaza, in that the Israelis would like to make Gaza the center, and really only part of Palestine, that would get any kind of notion of sovereignty. So you can see that all of these different elements fit together, as I said before, in a plan to put an end to the Palestinian struggle," Becker said.

"It's a gang of thugs," he said about Haley and Bolton's aggressive pursuit of Trump's foreign policy. "Trump is used to being a little dictator over his real estate empire… and they act that way. And they're acting that way, in ways that are, in a certain way, unprecedented, because they're so open in their language. And threatening the ICC [International Criminal Court] that, if the ICC investigates any allegations against Israel or any US allies, that the US will bring sanctions," he noted, including that ICC judges could be arrested and prosecuted if they travel to the United States.

During a speech Monday at the conservative Federalist Society, Bolton promised retribution against ICC judges if the body pursued charges brought against US military and intelligence officials from the US' war in Afghanistan. Politico noted that last November, the ICC's chief magistrate said the body would investigate allegations of torture and other abuses by US forces in the Central Asian country.

Bolton's threats extended to investigations of alleged IDF war crimes, saying that the ICC "has threatened Israel — a liberal democratic nation — with investigation into its actions in the West Bank and Gaza to defend its citizens from terrorist attacks."

"[W]e will not allow the ICC or any other organization to constrain Israel's right to self-defense," Bolton added. He said the decision to close the PLO office "reflect[s] Congressional concerns with Palestinian attempts to prompt an ICC investigation of Israel."

"I couldn't believe it when I heard it," Becker said. "They've kind of gone wild."

Becker pointed out the key role played by Egypt in enabling the US and Israeli policies against Palestinians.

"The al-Sisi government really looks at Gaza," which is governed by Hamas, he said, "as an extension of the Muslim Brotherhood." Becker noted that the territory was under Egyptian governance from 1948 until 1967, when it was seized during the Six-Day War (a misleading name especially for Israel's conflict with Egypt, which persisted until 1970). But while Hamas has become a more nationalist organization now, "whether it was at one time connected to the Muslim Brotherhood or not, the Egyptian government is a reactionary government that, really for its own purposes, continues to tighten the blockade on the Palestinians. It could greatly relieve the suffering of the Palestinian people if it wanted to."

Singling out Egypt and Saudi Arabia, Becker noted the Palestinian left "has said for a long time that their enemy is not just the government in Israel, but it's imperialism, headed by the United States, the Zionist regime in Israel, and the reactionary Arab regimes that fear the Palestinian movement and fear their own peoples rising up as well."