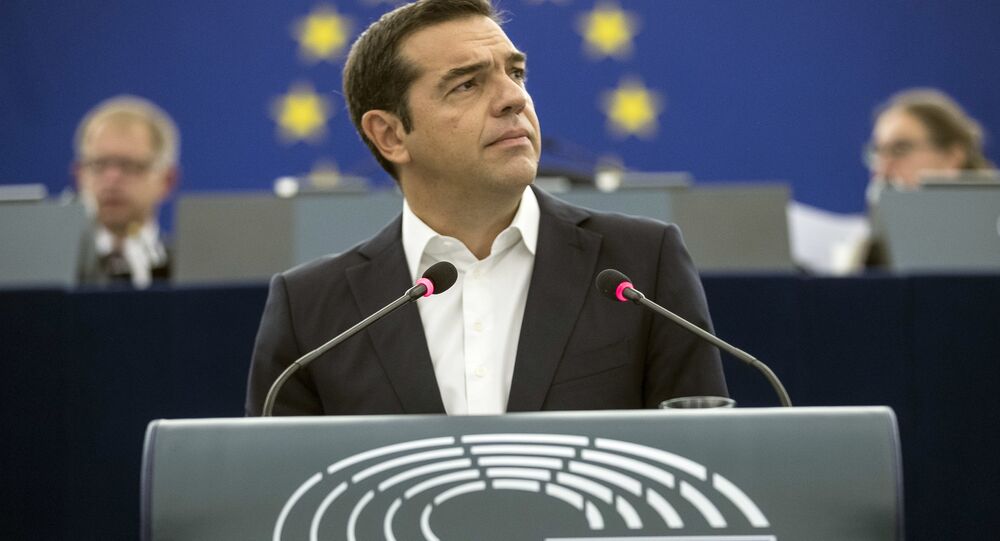 A link between the willingness of the Greek Prime Minister to "be very accommodative of Western interests" and the dependence of his coalition government on decisions made abroad has been drawn by a European politics and economy expert, speaking to Sputnik.

Greek Prime Minister Alexis Tsipras has addressed the European Parliament on September 11, laying out his vision for the future of Greece and the European bloc.

Among the issues highlighted by the politician were the economic development of Greece, fresh out of the bailout program, and the prospects of his own political advancement ahead of the upcoming elections for the European Parliament reps and the national election next year.

Sputnik: The EU Parliament was half empty during the speech? Does it mean, what Mr. Tsipras represents or what he had to say was not deemed important in Europe?

Yannis Koutsomitis: It is a very packed two days for the European politicians because there is a debate on Hungary in the Parliament and also the State of the Union address by Jean-Claude Juncker on Wednesday. Maybe some MEPs couldn't make it or wanted to save some time. The other possibility is that MEPs might have believed Mr. Tsipras might not be the Prime Minister of Greece by the time the next European elections will happen, so they didn't show up.

Sputnik: What are Syriza's chances in claiming election victory next year?

Yannis Koutsomitis: Mr. Tsipras didn't strictly exclude the possibility of snap elections in the spring. The polls indicate the opposition right-wing New Democracy party are ahead of Syriza. However, Syriza think that if they successfully mobilize the 2015 voters, they will be able to bridge that gap and have a real election thriller. It will be very hard to breach the difference in polls with the opposition party.

Young voters in Greece seem to be disappointed with the government and there is also the big issue of pension cut agreed with Greece's creditors earlier this year. The PM said he will start negotiations with the European institutions in the coming weeks. If Mr. Tsipras is able to either offset or completely cancel the pension cuts, then Syriza could have a chance against the opposition during the elections.

Sputnik: Does the Macedonia name issue have the potential to wreck the current coalition government in Greece? Does EU approval hold more value for Mr. Tsirpas than what some see as Greek national interest?

Yannis Koutsomitis: Ironically, the standing of the Greek coalition government depends on the vote on the vote of parliamentarians in Skopje. Mr. Tsipras tried to persuade the European leaders that he is a Greek leader willing to be very accommodative of Western interests in the region. He seemed very happy with the American presence at the Thessaloniki commercial exhibition fair this year.

But now the questions are: will the citizens of FYROM decide for or against the name change agreement and will the MPs in Skopje vote for Constitutional amendments?

If the name change falls through in Macedonia, Mr. Tsipras could claim that he kept his part of the bargain by supporting the new name but the internal politics of Zaev's government prevented the whole deal from happening. This wold also help the Greek PM maintain the alliance with Panos Kammenos [the head of the Independent Greeks party, which is included in the ruling parliamentary coalition along with Syriza].

Sputnik: A significant part of Mr. Tsipras' message to the European Parliament was dedicated to a strong, united Europe and its future. How important is the Greece-EU relationship for the Greek leadership?

Yannis Koutsomitis: He realizes that Greece is in dire need of European funds for the next year, considering the economic issues still present and the migration issue in the Aegean. He has now become even a bigger pro-EU fanatic than most pro-Europeans.

We must not let the EU crumble between neoliberalism & the far-right. We don't need less solidarity and more borders but a new social ontract for the cohesion and prosperity of our peoples. All progressive, democratic and pro-European forces have a duty to unite towards that end pic.twitter.com/rmDkSlzIid

Sputnik: Is it on Mr. Tsipras' agenda to breach the rift with Moscow, following a diplomatic row between the two countries?

Yannis Koutsomitis: It is, as Mr. Tsipras somehow feels uncomfortable about the way things turned out. My understanding is that most of the crisis was the fault of the Foreign Minister Nikos Kotzias. The PM is trying to find ways to make amends with Moscow.