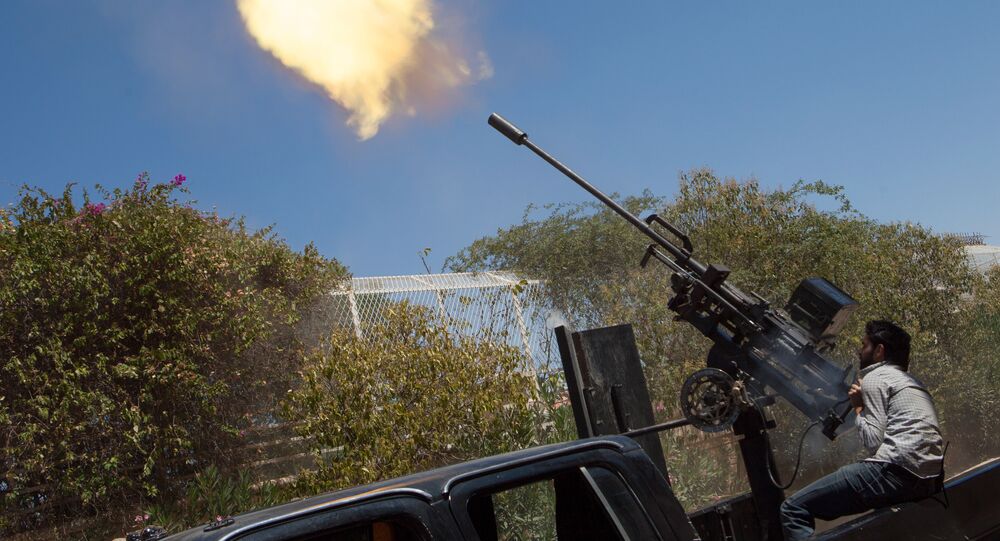 The removal of a Jerusalem Post article that clearly noted the Israeli military had supplied Islamist rebels in Syria with weapons and funds is just "the tip of the iceberg," journalist and filmmaker Dan Cohen told Sputnik.

Although it hasn't exactly been a secret that Israel dabbled in arming and offering its general support to groups wanting to overthrow Syrian President Bashar Assad, Israeli military officials actually confirmed on Tuesday that Operation Good Neighbor was something of a front to arm opposition groups, according to a Jerusalem Post article that ultimately had its online lifespan cut extremely short.

Archived snapshots of the report note that the Israeli military provided military equipment and munitions to rebel groups, in addition to tons upon tons of food, clothing, fuel, electric generators, medical equipment and medicine through Operation Good Neighbor, which saw its beginnings in 2016 as a humanitarian aid mission.

​Cohen told Radio Sputnik's Loud & Clear on Thursday that Israel had been arming Syrian opposition groups for years in order to "help consolidate its occupation and colonization of the Golan Heights."

Since the Six Day War back in 1967, Israel has occupied and controlled the western two-thirds of the Golan Heights. The remaining territory had been under the control of Syria, until the region was split between government and opposition forces during the years-long civil war.

"It's been reported before that Israel has been supplying armed opposition in Syria… even the Syrian Army has reported that weapons cache has been found in ISIS territories with Hebrew inscriptions… so it's not really a secret," Cohen told hosts Brian Becker and John Kiriakou.

"I think the real significance of the Jerusalem Post taking down this report is that it reveals the control that the Israeli military asserts and has over the Israeli press."

In 2017, the Israeli Military Censor banned the publication of 271 articles and partially or fully redacted more than 2,000 stories that had been submitted for review, according to the Jerusalem Post. The year before, 247 articles were fully banned.

Per the Post, the censor was given its authority by the British Mandate, which indicated that any journalist employed by an Israeli newspaper or other media outlet would have to submit articles related to the Jewish state's security or foreign relations to the military censor before being published.

"What does that say for the so-called ‘Only Democracy in the Middle East'? That it's really a military dictatorship, not only for Palestinians, but, also, for the Israeli press?" Cohen said.

For Cohen, the narrative that Israel hasn't played a role in the Syrian war is something that needs to be squashed. "There's this idea that Israel has been a bystander and just sat on the sidelines on the Syrian war and hasn't intervened, when it's actually very clear that it's been the opposite," the filmmaker said.

"Israel has very much fueled the war and caused a significant amount of bloodshed and just prolonged it for no apparent reason."

The article, which summarized points made during a Tuesday press conference held by senior members of the Israel Defense Forces, also noted that Israeli forces had attacked more than 200 Iranian and Hezbollah-run installations within the last year and a half in Syria. More than 800 bombs and missiles were used for those air raids.