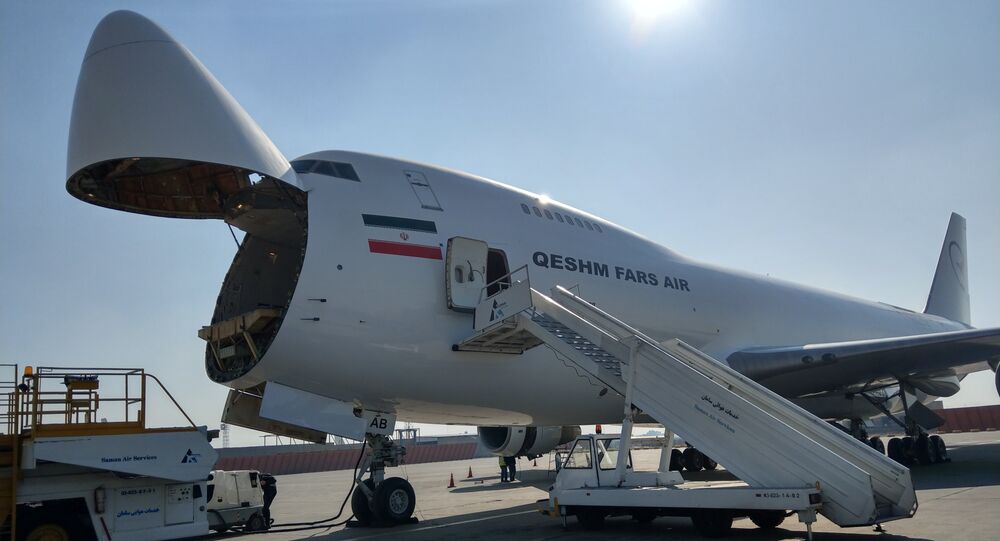 Fox News has accused an Iranian civil aviation company of smuggling arms into Lebanon, destined for the Hezbollah militant group, using "clandestine routes" said to have been uncovered by Western intelligence. Iran makes no secret of its political support for the Shia group but has vehemently denied supplying them with weapons.

In a recent report, Fox claimed, citing unnamed intelligence sources, that two "rare and unusual" flights by Qeshm Fars Air, a cargo hauler, were made from Tehran to Beirut recently, one of them making a short layover in Damascus. As possible evidence of wrongdoing, Fox cited the planes' trajectories, with the flight paths allegedly avoiding parts of western Syria.

1 / 2
© Photo : FlightRadar24/Google Maps
One plane's route showing that it passed over northern Lebanon after a brief layover in Damascus

Overlooking the idea that Qeshm Fars Air may have routed its planes this way out of security concerns, given that Syria is a war zone, Fox claimed, citing a "regional intelligence source," that Iran was "testing and defying the West's abilities" to track its alleged weapons smuggling.

Speaking to Sputnik Persian, Dr. Seyed Hadi Afghahi, a Middle Eastern affairs observer and former diplomat who has served in the Iranian Embassy in Lebanon, said that Fox's coverage was not surprising, given their role in the American political and media landscape.

"First off, let's recall what interests Fox News represents. This is one of the media mouthpieces sponsored by the US Department of Defense. Its senior executives consist of cadres representing the Zionist lobby in the US, or receive instructions from Tel Aviv," Afghahi said.

"Second: why does Fox News cite 'Western intelligence services' without giving specifics, or the name of the service, for example, MI6? The channel offers very vague information without specifying even the name of the service which could confirm or deny such statements. This sort of reporting speaks for itself. Either documents must be presented, or reliable sources identified, which can confirm what the channel says."

© AP Photo / Ebrahim Noroozi
Western Intel Suspects Iran Smuggling Arms to Lebanon by Air - Reports
Finally, Afghahi said that given the fact that this was not the first time that Fox has been accused of spreading false stories, "the informational content presented, which isn't supported by evidence, cannot be taken at face value."

According to Dr. Afghahi, the more important aspect in the smuggling story is finding out what concrete goals Fox may be pursuing. Afghahi believes that the situation in the Syrian province of Idlib, the last major stronghold of extremist militants, and Syrian Army plans to liberate the territory, is the real "stick in the craw" for the US and Israel at this time. The "arms smuggling" story, in this light, is just an excuse for Western intervention in Syria against Damascus and its allies, including Iran and Hezbollah.

"Today, the region is in a very difficult and sensitive situation," the observer stressed. "The operation to liberate Idlib, where terrorist groups and even the Turkish army are still operating, is approaching; this causes discontent among certain parties, who would like to prevent such an operation from being carried out. This, first and foremost, includes the United States, which uses its informational, strategic, military and political resources to engage in sabotage. Moreover, the US has officially warned that if the Syrian Army were to be joined by the forces of its allies, Iran and Hezbollah, this would constitute an escalation of the situation in the region, result in increased casualties, and possibly even the use of chemical weapons by Assad's forces."

© Sputnik / Mikhail Alayeddin
Last Battle: Syrian Army Ready to Launch Offensive, Liberate Idlib – Syrian MP
Washington, according to Afghahi, "is distraught" over the fact that the victory over terrorism in Syria will be won by Bashar and his allies Iran, Hezbollah and Russia, and not by the US. "This fact is a great disappointment to the US and its allies. Therefore, they are preparing the groundwork, using all possible levers of influence, including spreading fake news, to ensure that this doesn't happen."

Ultimately, Afghahi emphasized that by pushing the smuggling narrative, Fox is working to provide both Washington and Tel Aviv with a pretext to strike Iranian advisers and Hezbollah fighters in Syria, where the latter have assisted in Damascus's fight against terrorism.

The views expressed by Dr. Seyed Hadi Afghahi are those of the speaker and do not necessarily reflect those of Sputnik.