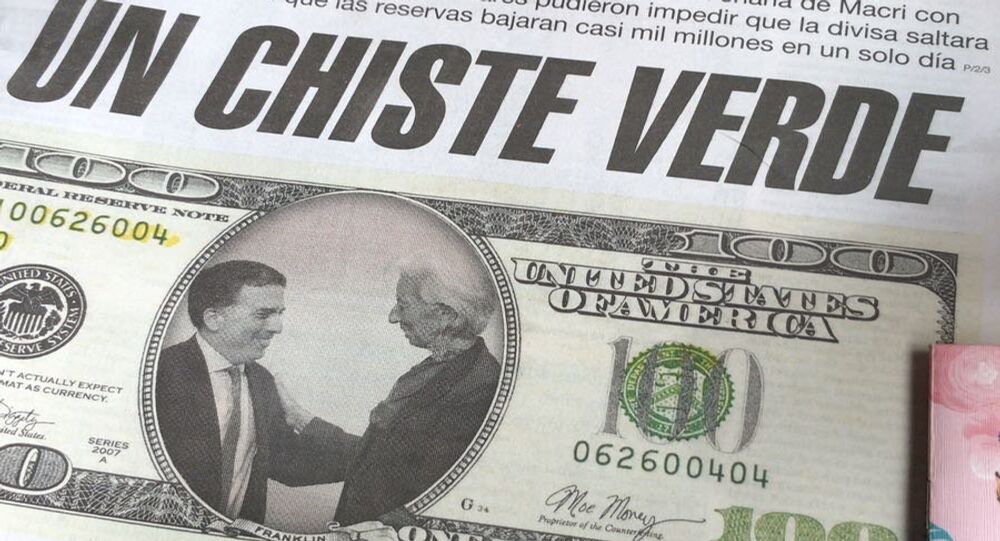 Argentina's currency, the peso, continues to plunge against the dollar despite a US$50 billion bailout by the IMF. Sputnik spoke to journalist Carmen Duarte, in Buenos Aires, about the financial crisis and how it reflects on President Mauricio Macri.

In a televised address to the nation on Monday, September 3, President Macri said Argentina could not keep spending more than it produced.

He said taxes on soy beans and grain would rise and half of the nation's government ministries would be abolished.

Carmen Duarte, a journalist in Buenos Aires, said it had since emerged that the ministries of health and labor were among those which would be closed down.

Shutdown: the facades of closed stores in Buenos Aires, Argentina.
Retail sales in the country fell 8% in August and inflation is expected to reach 40% this year
📷 Eitan Abramovich pic.twitter.com/szshUD9Csn

​"Their state of mind is obvious. They don't give a s*** about health. The health service here is not privatized but we are heading towards that. They have already eliminated some free vaccines from the national calendar of vaccination," Ms. Duarte told Sputnik.

Argentina's economy is in terrible shape, with inflation hitting 40 percent and the currency under attack from speculators.

The peso has lost more than 50 percent of its value against the dollar since the start of the year and interest rates have just been hiked to 60 percent, the highest in the world.

"Macri and his free market supporters were the right wing bad boys that were going to teach us how to run a country efficiently. They said they knew their way in and out of the market…but now they are saying they are not getting any love from the markets," Ms. Duarte told Sputnik.

I met today with Minister @NicoDujovne and Central Bank Deputy Governor Cañonero to initiate discussions on how the IMF can best support #Argentina. We made progress. Discussions will continue at a technical level and our common objective is to reach a rapid conclusion. pic.twitter.com/KeKbrqZdhR

​"While they are making these cuts they are not going for the big money — the tax cuts to the rich remain untouched," Ms. Duarte told Sputnik.

"Meat has become too expensive. Enough! We can't keep living in a state of permanent sacrifice, the price of meat is going up every day," Ezequiel Gonzalez told the AFP news agency.

'I Don't Know How All This Will End'

"The situation worsens every day, I don't know how all this will end," said Mr. Gonzalez, whose monthly salary of 20,000 pesos ($500) cannot keep pace with inflation.

"IMF Out" graffiti adorns the walls of Buenos Aires and there are daily street protests in the capital against Macri's conservative government and the IMF.

There are echoes of the economic crisis in 2001.

​"This government, they're leaders who govern for the rich," Edith Zaida, a carer, told AFP.

She lives in Tigre, 20 miles from the capital, and spends at least three hours a day on public transport.

"Cristina Kirchner did more to look after the poor. Maybe she stole, but we had something to eat when she was president," said Ms. Zaida, referring to unsubstantiated allegations that Kirchner received millions of dollars in bribes.

'Sometimes I Cry. I Want To Leave'

Ms. Duarte said Macri was blaming Kirchner and her government for Argentina's predicament.

​"He has also blamed Turkey and corruption and even the weather," Ms. Duarte told Sputnik.

"What happened in Turkey has hit Argentina hard because we now have to learn to live only the money we really have and not on constantly getting loans. But having said that, this government has now sunk Argentina in historic debt, superior to the foreign debt it acquired," Ms. Duarte told Sputnik.