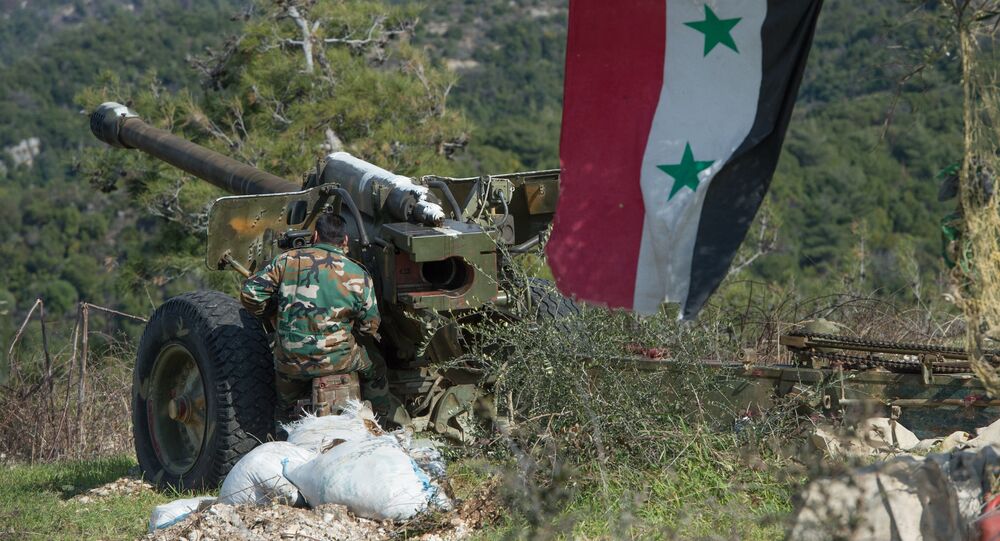 Damascus's upcoming Idlib operation has triggered deep dissatisfaction among the US and its Western allies who would like to see it thwarted, retired Brigadier General Ali Maqsud told Sputnik. According to the Syrian general, ongoing Russian naval drills may prevent the US-led coalition from executing a strike on Syrian government forces.

According to the analyst, Syria is being targeted by both regional and international forces. Currently, the Syrian Arab Army, backed by its allies, is advancing in southern Syria and preparing for an all-out Idlib operation.

Naturally, jihadists and their sponsors are dissatisfied with the developments on the ground, he highlighted, adding that they would do whatever it takes to prevent the government troops' offensive. Maqsud believes that the US and its Western allies are getting ready for a strike on Syria.

"Under these conditions, the true goal of the Russian drills in the Mediterranean Sea is to deal a blow to the impending aggression. The arrangement and conduct of the [military] exercises implies cooperation on the political and diplomatic levels between Russia and its allies. The result of these drills will be stability in the region," the retired brigadier general said, adding that the White Helmets and other rebel groups would not be able to carry out a chemical provocation in Syria.

© Sputnik / Dmitriy Vinogradov
Kremlin: Drones Launched by Idlib Terrorists Threaten Russian Bases in Syria
"The countries of the region have boosted relations and improved coordination," he explained. "Iran confirmed through Russian intermediaries that it is working and will work to establish stability and peace in the region."

According to Maqsud, the US has backpedaled on its initial offensive plan.

"The Americans have deployed radar defense systems in Al-Shaddadah, a town in al-Hasakah Governorate in the north of Syria. This system is meant to protect the base from air attacks. I think they are preparing to defend themselves," the analyst suggested.

It was earlier reported that the Russian military drills in the Mediterranean would involve 26 warships and submarines, as well as 34 combat aircraft including Tu-160 strategic bombers, Tu-142 and Il-38 anti-submarine warfare planes, Su-33 and Su-30SM fighter jets.

© Sputnik / Yury Strelets
Russian Navy, Warplanes Start Massive Drills in the Med Amid Concerns of Possible US Attack on Syria
The ongoing exercises came on the heels of US threats to act "very strongly" in case the Syrian government resorts to the use of chemical weapons during the upcoming advance on Idlib, the last terrorist stronghold in Syria. Simultaneously, Moscow warned about the possibility of a chemical provocation by jihadists to provoke the US-led coalition into retaliating against Damascus.

Earlier, the Trump administration had authorized two missile strikes on the Syrian Arab Army over alleged chemical incidents in Khan Sheikhoun and Douma, in the absence of any credible evidence of Damascus's involvement in the cases.

The liberation of Idlib, which currently accommodates about 70,000 jihadi fighters and up to 3 million people, could significantly thwart terrorist activities in the region. Syrian President Bashar al-Assad has signaled that Damascus attached great importance to the liberation of the province from terrorists.

However, it appears that the Syrian Army's counterterror effort does not fit into Washington's plans: On September 4, US President Donald Trump warned Damascus against executing the Idlib operation.

​The same day, the Kremlin emphasized that Idlib, being the last hotbed of terrorism, destabilizes the situation in Syria.

"The situation in Idlib continues to be a subject of particular concern to Moscow, Damascus, Ankara, and Tehran," presidential spokesman Dmitry Peskov said Tuesday. "The fact is that there is a hotbed of terrorism there…. This undermines attempts to bring the situation to the track of political and diplomatic regulation."