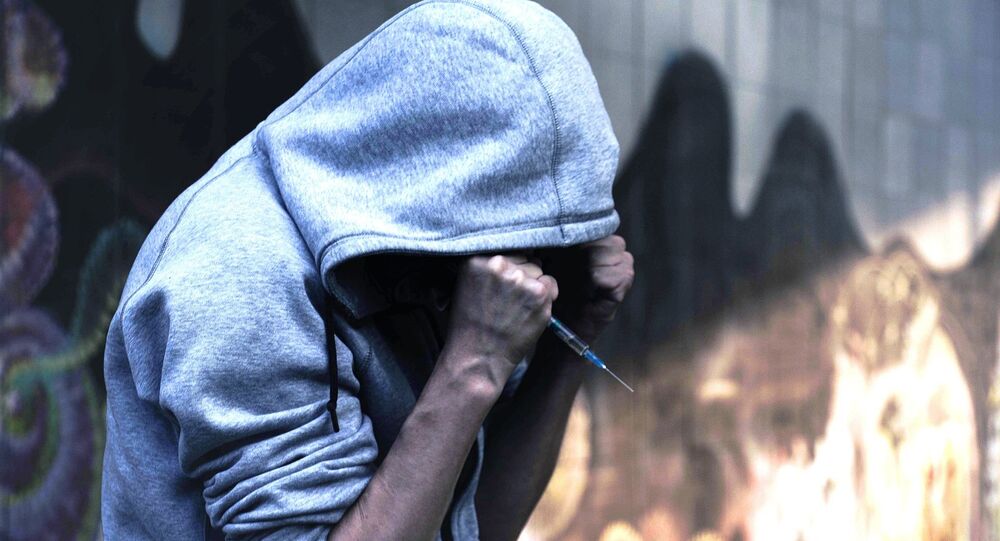 It was surprising to hear from the prison that if we were to take drugs, we should take them in a group, a former prisoner turned prison campaigner told Sputnik, as he described the murky world of drug trade and use in British prisons.

Lack of spending on British prisons has long been a significant part of the national crisis, with a report by the UK Parliament's Public Accounts Committee blaming record levels of self-harming in prisons on "deep-rooted failures".

The situation is exacerbated by the widespread use of psychoactive substances and drugs in prison wards throughout the country and growing precedents of drug trafficking into prisons by drones and reports of prison staff corruption.

Having served term in Strangeways and Forest Bank prisons in England, Cody Lachey told Sputnik that during the time on the inside he was himself involved in drug trade and also witness the deadly effect and the widespread prevalence of drugs.

'This Is How You Take Drugs'

In the prison if you have money, once a week you'd be able to spend money on toiletries, writing pads, pens, chocolate, coffee, tea, sugar… It is called a canteen sheet. I used to spend 25 pounds a week. It would come in a see-through bag with all the things you've ordered. Within the bag, there would be this folded A4 piece of paper, which would tell you how to safely take new psychoactive substances.

When I was on my last stretch in #prison these 'how to safely take Drugs) sheets came in our canteen packs, so again when I got out i took it straight to the paper. There is two ways you can look at it either admitting defeat on Drugs/NPS or prevention #NPS #Drugs #HMP #MOJ pic.twitter.com/oe2jgfhjtF

As prisoners, we obviously knew how many drugs were in the prison and weren't surprised at all. The surprising thing, however, was to hear: "if you gotta take drugs, don't do it on your own, take them in a group of people."

They then put a diagram on how to put a person in a recovery position. Now, if you are smoking spice (synthetic cannabis) with your friends and one of them has a fit or goes unconscious, they can't even stand up. So to advise us to give first aid to someone on drugs was wrong.

We don't have medical training, that's the prison officers' job. But they don't have the numbers. Ultimately, they'd tell us how to take drugs, how to chop them up into fine powders; don't share needles and do drugs together.

Darren Rawlinson died of drug overdose on a drug-free wing, which tells you everything you need to know about the prison system. It was a headed sheet of paper, announcing a death in custody. I asked one of the lads to keep the eyes on the office and ripped the sheet of the well and hid it in my cell. They tried to sweep this death under the rug because it was a death in custody, from drugs, on a drug-free wing.

A few weeks before I left forest bank #prison on my last stretch a prisoner called Darren Rawlinson died of an alleged drug overdose this is the leaflet that was on the wing, so I took it and when I was released I ran to the paper so his death wasn't swept under the rug #RIP pic.twitter.com/XaZd6CEptT

Spice is a drug of choice in prisons. I've seen way too many people under the influence on that drug and it is scary to see. I used to be involved in prison drug trade but this spice — I've never seen anything like it.

Cannabis, heroin cocaine — anything you can get outside of prison, you can get on the inside. The only difference is that the drug on the streets will have a certain price. As soon it crosses the threshold and gets into a prison, that price can go up to ten times of the street value. In prison, you have to sell it for the premium.

There are drug wars going on in prisons as drug dealers are attacking and cutting each other. Drug trade at the end of the day is a business and in prison it is very lucrative. So much so that prison officers are getting in on the action, they are smuggling drugs into prisons as well. If you've got people on the wing selling the same drug, they are forced to bring the prices down.

From Drones to Walls: Sources of Drugs

© REUTERS
A drone intercepted by police as it was being flown near a north London prison is seen in this handout photograph released on August 22, 2016, in London, Britain.

People make a lot of money on drug trade in prisons. I know lads who send a couple of hundred pounds per week to their girlfriends.

Every person who goes into prison, whether a member of staff, a nurse, a civilian contractor, a chaplain, a prisoner, a prisoner's family — everybody should be search for possession of drugs. The amount of prison officers bringing drugs into prisons is astronomical.