While seeking a return to imperial hegemony, the UK is neither dominating the world nor taking care of its own people, Adam Garrie, a geopolitical analyst and director at Eurasia Future, told Sputnik. The bold Brexit rhetoric and the idea to turn the Commonwealth of Nations into a new trading bloc might ultimately face stark reality, he believes.

"A very rude awakening is in store because unless the UK settles on the Norwegian or Swiss style model — which I suspect they ultimately will, the EU will show the UK the door and slam it shut," Adam Garrie, a geopolitical analyst and director at Eurasia Future, told Sputnik, commenting on the UK's post-Brexit prospects.

Commenting on the much-discussed Brexit, Garrie pointed out that "first of all, it may not even be that Brexit happens and if it does, many people on all sides of the political spectrum will be disappointed with the outcome."

"Clearly the current government in the UK is more concerned with preserving Britain's current status as a nation that trades freely with the European Union than it is with forming free trading agreements independent of Europe," he said. "If as I suspect, Britain will settle for a Norwegian or alternatively a similar Swiss style arrangement with the EU, Britain will not be able to make independent free trading arrangements with those outside of the European Single Market."

© Sputnik / Alexey Filippov
No-Deal Brexit May Disrupt Food, Air Transport Sectors in Short Term - Report
Apparently, therefore, "Britain's efforts to secure free trading agreements with non-European nations have been so weak," he suggested. "The puppeteers are doing little to conceal their own charade."

According to Garrie, "the government would like nothing more than to forget the entire Brexit business and return to the old status quo."

However, the problem is that the Conservative party would split if its leadership were to say so in the open, he presumed.

"Thus, the UK government is going through the motions of Brexit without meaning any of them," the analyst said. "The trouble is the EU is very serious about its position."

Will UK Turn Into British Empire 2.0 After Brexit?

In the past four decades, the UK has largely relied on the European Union, formerly known as the European Economic Community, to negotiate and strike trade agreements with non-EU states. Now that Britain is going to leave the bloc, it is signaling a willingness to secure free trade deals with other nations directly.

© AP Photo / Dave Caulkin
S African Opposition Slams 'Colonizer' May, Demands Commonwealth Withdrawal
Thus, the British government has come to the agreement with Beijing to negotiate a free trade deal with China, the world's second-biggest economy. Additionally, London has turned to Africa: On August 28, UK Prime Minister Theresa May pledged £4 billion (US$5.1 billion) in support for African economies and vowed to make Britain one of the biggest investor in the continent.

Commenting on the matter, David Collins, professor of international economic law at City University of London, expressed confidence that Australia and Canada would be "the next ones in the line" to consider new trade agreements with the UK, referring to the significance of old Commonwealth ties for the British government.

In April 2018, May called upon the Commonwealth countries to team up and boost cooperation amid growing threat of economic "protectionism."

"With its unique scope and global voice, such a Commonwealth can set a powerful example to the world, one that demonstrates and underlines the importance of protecting free trade and a rules-based international order," the British PM told a Commonwealth business forum. 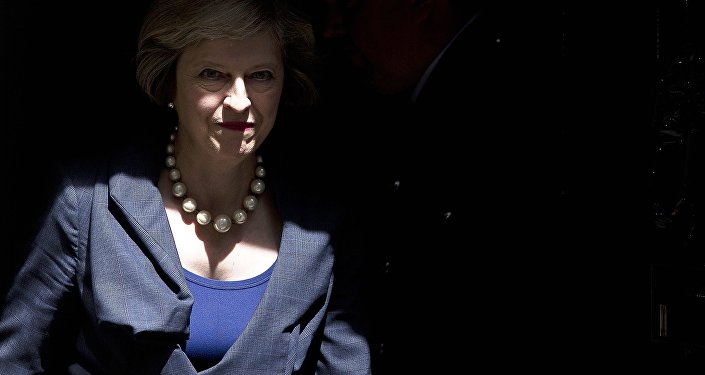 © AFP 2019 / Justin Tallis
Theresa May Will Not Accept 'Compromises' on Brexit Deal - Reports
The Commonwealth of Nations is a network of 53 countries, mostly former British colonies. The network, which is formally headed by Queen Elizabeth II, is not a trading bloc. Besides, its members do not have any legal obligations to each other.

The question then arises whether the British leadership is pushing ahead with the revival of "the empire on which the sun never sets."

According to Garrie, May's Commonwealth idea sounds more like an illusion: While some in the UK still continue to dream about Britain's long-lost imperial glory, "the fact of the matter is, the Commonwealth is among the most irrelevant of all multi-national bodies."

"While the Shanghai Cooperation Organization is united around the need for collective security in Asia, ASEAN is united around the desire to strengthen the economic potential of south east Asia and while the EU is based on a desire of neighboring nations to trade freely rather than wage war upon each other, the Commonwealth is based on a past that most people in it would like to forget," the geopolitical analyst pointed out.

Moreover, most Commonwealth nations "have little in common with Britain in terms of economic needs and aspirations" and "share development goals with China."

"Therefore, the idea of reviving the Commonwealth which was laughed at in the 1970s by mainstream British politicians including pro-Europe Edward Heath and anti-Europe Enoch Powell, is today nothing but a childish exercise in futility," he summed up.

Great Britain: No Longer a Superpower

© AP Photo / Frank Augstein
Certain UK Conservatives Seek to 'Sabotage' Brexit Deal - Ex-SNP Official
In contrast to the US and China, which do have both political power and economic leverage, with the People's Republic now being "the clear leader of a world," Great Britain is still stuck in its old imperial thinking, according to the analyst.

"It would be delusional to think that the UK could act in the manner of the US or China as it simply isn't that powerful an economy," Garrie noted. "The biggest problem the UK faces is that it wants to pretend to be a superpower even though that is no longer the case."

He believes that Britain could really benefit "by looking to Singapore and realizing that economics is more important than world domination."

"Right now in seeking world domination Britain is neither dominating the world nor taking care of its own people," Garrie stressed. "The root problem is a lack of intelligence in government. It is as though men and women with pragmatic brains need not apply."