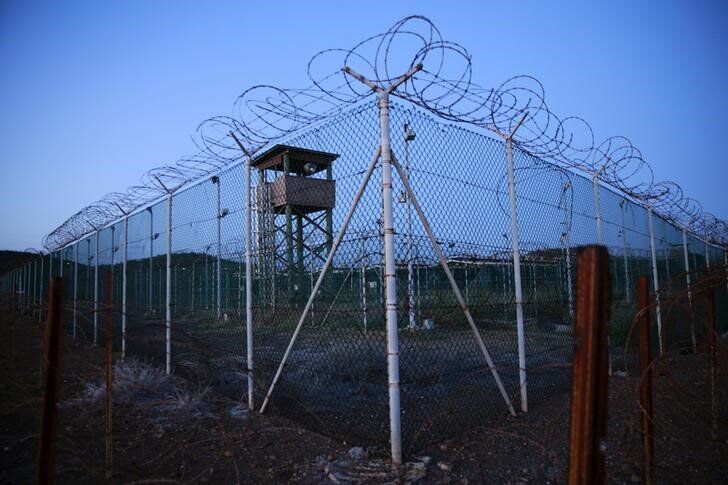 US President Donald Trump is considering sending captured Daesh* fighters to Guantanamo. According to reports, the alleged plan has raised concerns from experts, who have warned that such a measure could boost the terror group’s recruiting efforts. In addition, hundreds of lower-level fighters are expected to be placed in an Iraqi prison.

Sputnik discussed this with Robert Freedman, visiting the professor of political science at Johns Hopkins University.

Sputnik: What are your thoughts about Guantanamo, its current status and the prospect of sending additional prisoners to be detained at that facility?

© East News / BRENNAN LINSLEY
Placing Terrorists in Gitmo to Send Terrible Message About US – Security Expert
Robert Freedman: You know you're dealing with terrorists here, and you and Moscow should be only too aware of what went on in Chechnya, Dagestan and lots of other places in Russia, so the question is: where do you put the terrorists? Now Guantanamo is a good place because it's isolated, it's very hard for any of these prisoners to escape and it sends a message that if you are going to volunteer for ISIS or Al Qaeda, you could be sent to Guantanamo.

Your radio commentator said that this would be a means of rallying people to join ISIS or join Al Qaeda; on the other hand, one can also make an argument that if people know the Guantanamo is going to be their last stop, it could be a deterrent, and that's my position.

Sputnik: But given your position, you have to realize that there are still many people who have been taken to Guantanamo and have been cleared after being tried. They've been cleared of terrorist activity, and that is a facility that associates the United States with torture. There have been a lot of scandals coming out of Guantanamo, I think it's been pretty much proven and acknowledged that there were incidents of torture at Guantanamo, and there's also information to the effect that there are many people who were found not guilty, and there's a whole other problem of then repatriating those people because where do you send them?

Robert Freedman: Well let's take these into two steps; first of all, I say it's something good for the American legal system, if these people once brought to Guantanamo have been found not guilty; that's the first thing I'd like to say to that. Secondly, I share the late Senator John McCain's view that torture is something absolutely wrong, it's morally wrong and it doesn't get you the answers you want, so torture never should have happened in Guantanamo. I'm glad people found out about it and I'm glad it's been stopped now by a Congressional Bill signed by the President, so those are my positions on that issue.

Sputnik: It's great that people were tried and it was decided that they were not guilty, but what do you do with those people; do you leave them in the US then?

© AFP 2020 / JIM WATSON
Trump Mulls Sending Captured Top-Ranking Daesh Fighters to Guantanamo - Reports
Robert Freedman: Let's give an example. Say there was a Russian who was tried and found not guilty, would Russia accept them back? That's the question. Will Kyrgyzstan or Kazakhstan or one of the —stans in Central Asia accept them back? I think you have to look at it on an individual basis, and people have been sent back and sometimes you have to go to a third country and that's happened as well.

Sputnik: And sometimes nobody wants to take them back, because who wants somebody after Guantanamo, those are terrorists, right?

Robert Freedman: Well not give the United States can give them an affidavit that these people were innocent, not guilty.

Robert Freedman: That's a possibility, but don't forget you're on the battlefield here, you have a terrorist incident, and they are the people who are suspected of participating in the terrorist incident. Do just let them go or do you try them and try to find evidence? And I think that's what's going on here.

Sputnik: Some people have said that it would be best to try these people who are suspected of terrorism, especially in battlefields, in a US Federal Court, what are your thoughts on that? What are the pluses and minuses of that procedure?

© Sputnik / Magda Gibelli
Ex-Guantanamo Detainee Jihad Deyab Deported From Turkey to Syria - Sources
Robert Freedman: There are pluses and minuses. The plus is, I think it has been proven over time, that in a Federal Court actually more people have gotten acquitted than in the military curt which is in Guantanamo, so that's the plus. The minus is the security issue. If this person is presumed to be a terrorist until he or she is actually tried, how do you provide the extra security that you would need in a Federal Court when you can provide the security much more easily in a place like Guantanamo, so I think you have to weigh both of these in each case.

Sputnik: What happens though when you have a facility like Guantanamo and you have many people who have been tried and acquitted of all charges and are not found to be associated with terrorists, and you have those who are hardcore terrorists and they are in the same facility where there have been incidents of torture, everybody knows about this, if you see that you are in a facility and know that people have been tortured you're not going to have a great idea of American democracy or American values, I can imagine, and there you have your co-inmates who have extremist views. Is having a facility like Guantanamo opening yourself up to creating more people (with extremist views)?

Sputnik: But how do you know if they're hardcore, they haven't been tried yet…

Robert Freedman: No, what I'm saying is the ones who are still in Guantanamo, who've been tried and convicted are the hardcore, then you have people coming in who may or may not be hardcore, so you put them in a separate section of Guantanamo and try each of these people individually.

The views expressed in this article are solely those of Robert Freedman and do not necessarily reflect the official position of Sputnik.