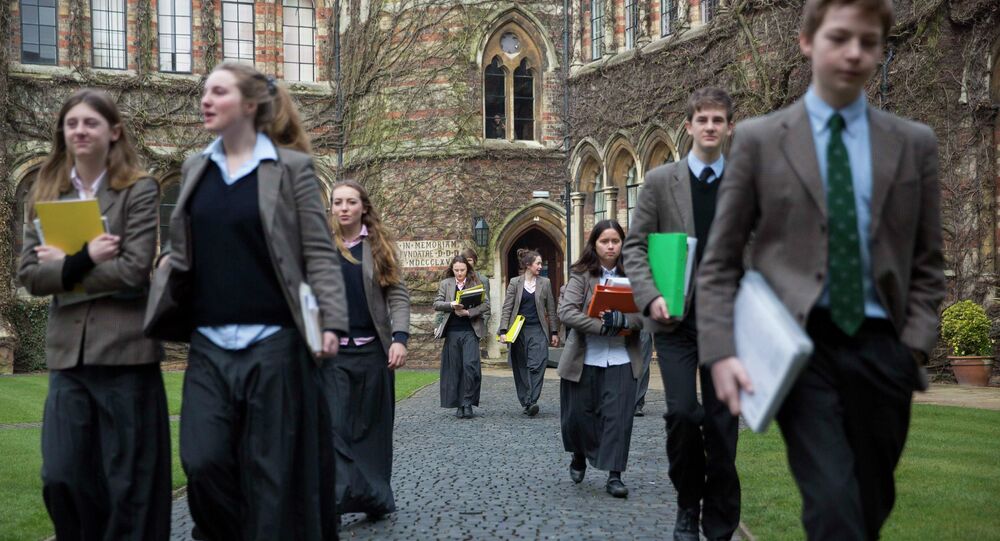 England's schools are facing a severe shortage of teachers, with bigger class sizes and more subjects taught by staff without a relevant degree. The independent think tank the Education Policy Institute says that as schools in England prepare to return after the summer break, the problems of teacher recruitment remain unresolved.

© Sputnik / Vin Sharma
UK Students and Teachers Rise Up to Protest, Then Party, in London
There are particular problems for getting specialist teachers for maths and science, which the study says reflects the difficulty in recruiting graduates who could get better paid jobs in other careers. Sputnik spoke to Nansi Ellis, assistant general secretary for education policy at National Education Union about the latest report in to shortages.

Sputnik: What did you make of the report in to teaching?

I think by focussing on pay supplements and for some teachers, it misses a lot of the issues around why teachers leave the profession. We know one of the biggest reasons they leave is their workload.

Sputnik: How can the teaching shortage be improved going forward?

© Photo : Pixabay
UK Schools to Close as Hundreds of Teachers Strike Over Poor Funding
Nansi Ellis: I think we need to look across the board at teachers’ pay, a good first step would be the government funding the 3.5% pay increase that they just recommended, they haven’t fully funded, so they need to do that.

They need to keep looking at teachers’ pay, because the gap between teachers’ pay and the pay in other graduate jobs professions is widening now the economy is getting better.

The government also needs to do more and think about workload and focus on the impact of accountability measures. They need to look at the changes around exams that we’ve had in England this year, and to look really seriously at reforming Ofsted.

Sputnik: Do you think that the targeted incentive wages is a good idea?

© Flickr / Stephen Coles
UK Older School Teachers Face Discrimination ‘Too Often’
Nansi Ellis: It’s covering over the cracks, I think we need to be looking at bringing in teachers of all subjects into the profession although maths and physics in particular have a low number of teachers with a degree in that subject, other subjects are equally low. In England two thirds of teachers have a relevant degree at secondary level, so it’s not just those subject.

We need to increase the pay across the board, but also make teaching a more attractive profession.

Teachers come into teaching because they want to make a difference to children’s lives and often they love there subject; they want to enthuse children with that subject knowledge.

What they get when they come in though is actually, a profession that is geared towards teaching to a test or exam; it’s about pupil’s performance rather than deep learning. That stops teaching giving their best to the profession and means there no longer engaged and reason why many of them leave.

Views and opinions expressed in this article are those of Nansi Ellis and do not necessarily reflect those of Sputnik.

UK Students and Teachers Rise Up to Protest, Then Party, in London