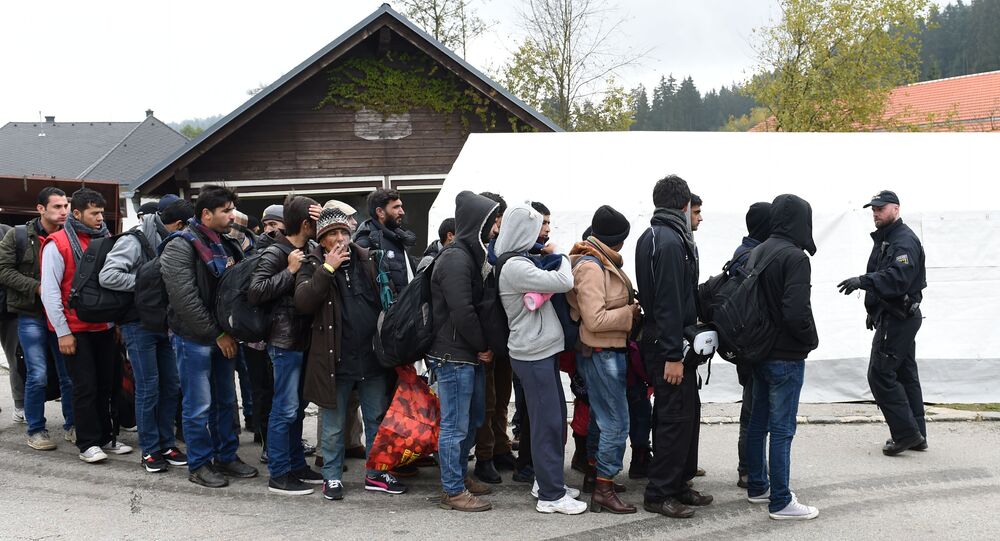 German officials are investigating the leak of an arrest warrant for an Iraqi suspect to far-right groups after thousands participated in an anti-migrant rally in the eastern German city of Chemnitz following the death of a man, who was allegedly killed in a fight with immigrants during a festival.

Sputnik: Can you give us the latest update on the situation in Chemnitz? Have the protests ended?

© Sputnik / Stringer
Chemnitz on Alert in Response to Govt Stance Over Anti-Immigrant Protests
Christian Blex: No, they will still continue because the matter is still [current]; we still have hundreds of thousands of so-called “refugees” in our country, so it will not stop.

Sputnik: I’d like you to clarify some of the details of what exactly happened in that assault. I understand that there was a German man; I’ve heard some reports that it was a German man of Cuban origin. I don’t know if he was in fact an immigrant in recent years and he was allegedly stabbed to death after a verbal conflict of some sort by a Syrian and an Iraqi national. Is that correct?

For us it doesn’t matter if it’s an immigrant or not; it’s a victim of Merkel’s policies.

© REUTERS / Matthias Rietschel
Chemnitz Unrest: We are Facing Growing Polarization Within German Public – Prof
Sputnik: Do you separate the countries from which various migrants have come?

Christian Blex: No, for us it doesn’t matter if the victim was a foreigner or not. It’s a victim of Merkel and her politics.

Sputnik: Can you explain that, please?

Christian Blex: It doesn’t matter to us if it’s a Cuban immigrant or not.

He’s dead because Merkel opened the borders in 2015 and let in hundreds of thousands of illegal immigrants. So, he is sadly a victim of Merkel’s policies and we are not going to tolerate this anymore.

Sputnik: Are the two men who were allegedly guilty of stabbing the man to death illegal? Is there information that they are illegally present in Germany?

© AP Photo / Jens Meyer
German Police Under Scrutiny After Chemnitz Killing Arrest Warrant Leaked
Christian Blex: For our government they are legally here, in Germany but, obviously, they entered Germany illegally. They got asylum but they don’t have the right to stay. Merkel simply broke the law when she opened the borders in 2015 and that’s what more and more Germans are recognizing.

Sputnik: Has it been clarified that these two men, the alleged perpetrators of the crime, did come in 2015?

Christian Blex: I don’t know exactly when they came, but they were asylum seekers too. We don’t have any borders with a country which is in state of war or persecution, so they don’t have the right to stay in Germany.

Sputnik: Authorities are condemning the hate in the streets and the hunt against foreigners, with media really portraying right-wing violence; what can you say about this?

The German media don’t point put that the victim was stabbed 25 times — that’s simply a slaughter. But the German public isn’t supposed to learn that; instead our government chose to bring up that the speculations about the events leading to the stabbing were fake news. They tried to further restrain free speech in social media, where much of the opposition is organized.

© AFP 2020 / TOBIAS SCHWARZ
'Government Learned Nothing': Germany's AfD Leader Slams Migration Policy After Brutal Rape
Sputnik: Do you think that this incident was politicized? Once it became known that they were nationals of Syria and Iraq. Is this being used by some to criticize Merkel’s agenda or to push forward their own agenda?

Christian Blex: I think it’s a feeling of people. In German society we are not used to stabbing, this is not our manner to discuss situations. We are civilized people and we didn’t have these incidents before the opening of the borders.

So, the people are getting more and more upset about what is happening in Germany. I don’t think that someone wants to use it; it’s simply a fact that the people don’t want to tolerate it anymore.

Sputnik: What is being proposed? You are a member of a political party; what does your party propose to resolve this issue or to fight crime of this sort?

But with every raped woman and murdered person, the number of Merkel’s followers here in Germany is falling and at the same time the popularity of our party, the AfD, is increasing.

So, for me it’s only a matter of time before the worst politician of the German post-war era is removed from office; in that case, I’m quite optimistic.

Views and opinions expressed in this article are those of Dr. Christian Blex and do not necessarily reflect those of Sputnik.