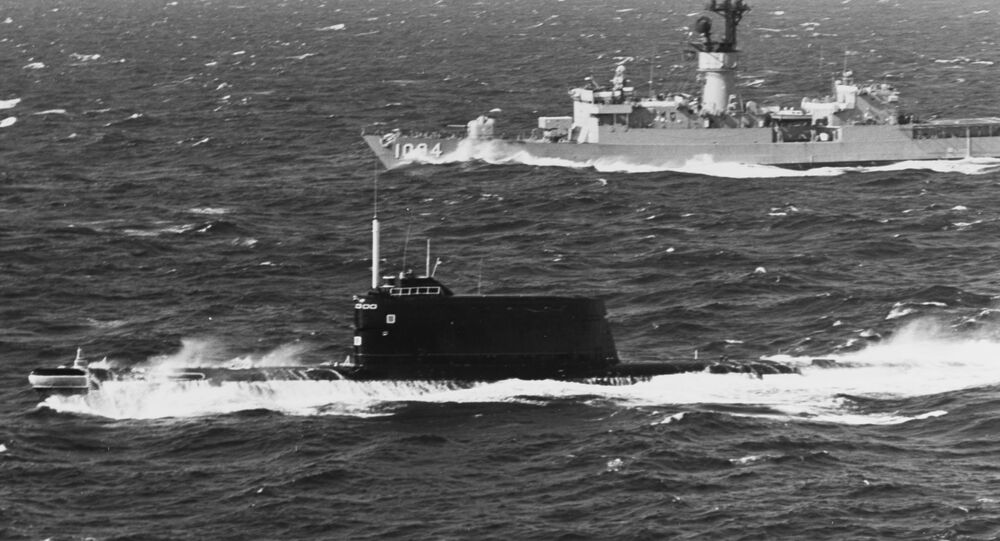 During the Cold War a secret battle went on underwater between the captains of Soviet, US and British submarines. Sputnik spoke to Iain Ballantyne, author of a new book on submarine warfare, about how close they came to triggering a nuclear war.

After the Cold War ended the Russian government acknowledged that between 1968 and 1987 there had been seven incidents during which Soviet submarines collided with the enemy.

The US admitted nine such incidents involving their subs between 1965 and 1975.

US Sub Spying On Soviet Port

Iain Ballantyne, author of The Deadly Trade: The Complete History of Submarine Warfare from Archimedes to the Present Day, said the USS Gudgeon, a Tang class submarine, was hounded by Soviet ships for 30 hours and almost sunk after trying to spy on the port of Vladivostok in the Far East.

"Gudgeon's encounter with the Soviets off Vladivostok in the late 1950s came during the first circumnavigation of the globe by a submarine — which was well publicized as a great achievement by the USA. Gudgeon being pursued by Russian surface warships was not. Many incidents that were rather serious were deliberately not commented on by either side, in order to avoid inflaming the situation, which was already tense due to the East-West confrontation," Mr. Ballantyne told Sputnik.

"I have interviewed submariners who were involved in some tricky situations under the sea during the Cold War, not least the collision between the British nuclear-powered submarine Warspite and an Echo II guided-missile boat of the Soviet Navy in the late 1960s. That encounter could have resulted in either of those vessels on the bottom of the Barents Sea, but fortunately both returned home safely, if a little battered," Mr. Ballantyne told Sputnik.

In 1968 a Soviet and a US submarine both vanished within two months of each other, triggering fears of a tit-for-tat exchange.

The wreck of the USS Scorpion was later found on the North Atlantic seabed, 400 miles from the Azores, but no trace was ever found of the Soviet K-129, which blew up near Hawaii with the loss of 100 men.

© Photo : US Navy
The wreck of USS Scorpion, 10,000 feet below the surface of the North Atlantic, 400 miles southwest of the Azores

"There were inevitably going to be fears that such losses happened during some form of combat. The reality in both cases was most likely tragic accidents. In the case of the Scorpion probably one of her own torpedoes blew up in the weapons stowage compartment, while in the case of K-129 poor construction meant she may have imploded due to water pressure," Mr. Ballantyne told Sputnik.

"There have been numerous claims and counter-claims about what really happened. The truth is that submarines operate in a very dangerous environment, in which people can die due to structural or technical failures under high pressure while they also carry a lot of explosive materials that when handled or stored wrongly can detonate with terrible consequences," Mr. Ballantyne told Sputnik, pointing to the Kursk incident in 2000 as an example.

Mr. Ballantyne said the Cold War called for great secrecy among soldiers, airmen and sailors, but especially so for submariners as their boats' movements were essentially invisible.

"Talking even to your close relatives and loved ones about exactly what you had been up to on a patrol was not allowed, with stiff penalties during the Cold War for those caught giving the game away, such as prison time," Mr. Ballantyne told Sputnik.

'A War With No Battles'

"It was, to borrow a line delivered by Sean Connery's Russian submarine captain in the movie Hunt for Red October, ‘a war with no battles, no monuments'," he added.

"I am sure many submariners on both sides who saw service during the Cold War have since taken secrets relating to some pretty hair-raising submarine operations with them to their graves," Mr. Ballantyne told Sputnik.

© AFP 2020 / Andy Buchanan
Submariners stand to attention during a ceremony to officially make 'Artful' a commissioned warship of the Royal Navy at Faslane Naval Base, Rhu, Scotland on March 18, 2016.

By 1969 both sides were spending in excess of US$50 million a day on creating an operating nuclear weapon systems, which including submarine-launched missiles.

"The arms race was ruinous for the Soviet Union, diverting the best scientists, engineers, sailors and others into the massive effort of trying to keep up with — and beat — the West, especially under the sea. It sucked in massive amounts of money on both sides, swallowed up vast resources, but it was the USSR that collapsed due to its weaker economic model," Mr. Ballantyne told Sputnik.

"As someone who visited the Soviet Union in its dying days, sailing to Murmansk and Archangel and going ashore — later visiting other places such as Sevastopol and Kronstadt to meet Russian Navy sailors and see the general state of affairs — I can attest to the sheer exhaustion caused by the long armed stand-off with the West," Mr. Ballantyne told Sputnik.

He said submarines remain crucial to modern warfare, with the British government having recently approved the spending billions of dollars on new Dreadnought-class submarines, equipped with nuclear weapons, which will eventually replace Trident subs.

Mr. Ballantyne said there was much talk in naval circles about unmanned or drone submarines.

"Drones are increasingly prominent in all arms of warfare and there are some very tricky questions to be answered about how they are employed. The specter of a Terminator-style world destroyed by machines, where humanity scurries for cover as drones slaughter without mercy hangs over us," Mr. Ballantyne told Sputnik.

"I met a British submarine warfare expert in the 1990s who forecast that submarines would be mother ships for drones they would send out far and wide. The reality is that modern torpedoes, which can think for themselves once they close with a target, are in essence drones which have existed for decades. Fully automated submarines have been suggested, but once you have created a craft that is big enough to possess significant patrol endurance, can handle the extreme pressure of deep diving and generate the power needed for sensors and launching weaponry, then you may as well build a proper, crewed submarine," Mr. Ballantyne told Sputnik.

"Looking across the whole scope of submarine the human element is vital, for using submarines to wage war is a matter of moral choices too. Some submariners have waged war mercilessly, but certain submariners have also shown humanity, sometimes helping to save the lives of people sailing aboard vessels they have just sunk. A drone would not do that unless programmed," Mr. Ballantyne told Sputnik.

The views and opinions expressed in the article are those of the contributor and do not necessarily reflect those of Sputnik.

Catch Me But You Can't: World's Top Ferrari-Fast Nuclear Submarines