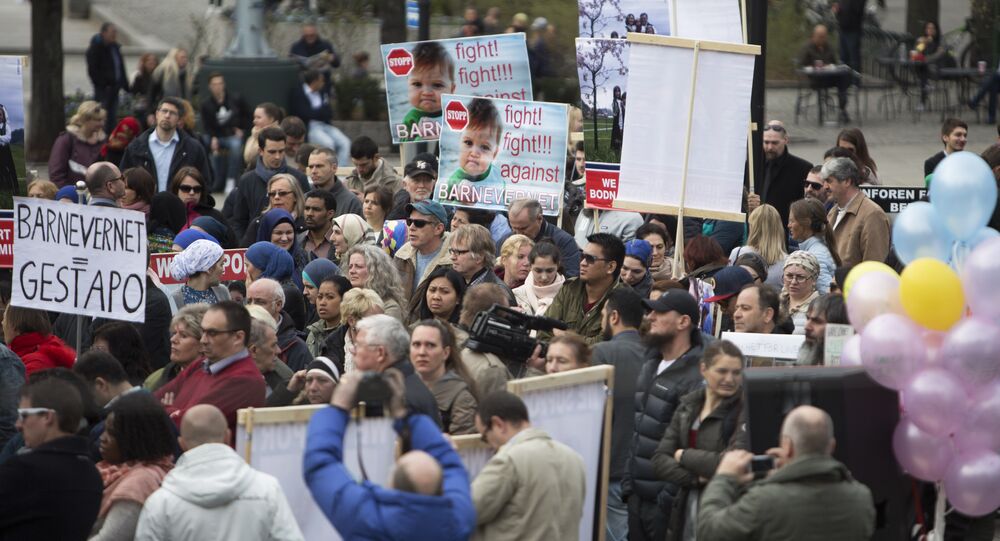 Norway's child protection service, Barnevernet, has been destroying Norwegian families for years by taking children away on controversial pretexts, Norwegian attorney Marius Reikeras told Sputnik. The lawyer cast doubt on the agency's competence, stressing that one of the agency's psychiatrists turned out to be pedophile.

A silent scandal has long been brewing in Norway, one of the richest European states, as the country's government is being accused of "kidnapping" children from their parents.

Barnevernet, the Norwegian child protection service, has become a nightmare for some families.

"I've been dealing with this issue since 2010," Norwegian attorney Marius Reikeras told Sputnik. "There were cases of unreasonable interference in family matters and unjustified deprivation of parental rights. I want to say that either those parents were first-class actors who could be awarded Oscar, or what we had witnessed was a government fraud."

© REUTERS / Max Rossi
Vatican Sees Child Sex Abuse as Sin But They Don’t See It as Crime – Prof
He explained that children have been separated from their parents under one and the same scenario, which has not changed over the years. The controversial practice is usually rationalized by the parents' alleged irresponsibility towards their children.

"Barnevernet can take children away without a court decision: It is enough just to notify the police," the lawyer elaborated. "Then six guys in uniforms knock on the door of a certain family, and it escalates from there. The justification for the intervention is the magic word 'emergency'."

He said that he had consulted with lawyers from all over the world and noted that American and Australian attorneys view this practice as nothing short of crazy.

"In accordance with European practice, children are taken away from their parents under the care of the state only for the period necessary to solve problems in the family," the lawyer explained. "Then these kids are returned to their biological parents, but not in Norway, where human rights are being violated, and moreover, on a mass scale."

According to Reikeras, this practice is no accident. The lawyer presumed that it had something to do with money. Besides, some cases seem to have a racial motive, he noted, referring to a Norwegian family of Swedish and Pakistan origins. This family fled Norway to Dubai in order to protect its children from Barnevernet. Reikeras believes that the child protection service is largely targeting socially vulnerable groups.

The attorney believes that Norwegian courts are literally hostile to human rights: "Everyone must obey the Supreme Court's decisions," he stressed. "Although Norway is a member of the European Court of Human Rights (ECHR), it does not play any role here, as we've already seen."

© CC0
Norway Incensed by Child Abuse in 'Quran Schools' Abroad
Eight Norwegian child welfare cases that were dismissed by Norwegian courts have been investigated by the ECHR since 2015. However, nothing has changed since then.

He remarked that those who had fallen prey to Barnevernet were surprised with the biased coverage of their cases in the country's mass media, as the Norwegian press usually justifies the practice deprivation of parental rights exercised by the government agency.

Adding to the controversy, it recently turned out that one of the psychiatrists, whose judgments Barnevernet had relied on, was a pedophile.

"Because of that man, several parental couples were deprived of their rights to raise their own children," Reikeras emphasized. "The same person collected images of child pornography on his computer."

© CC0
EXCLUSIVE: How UK Authorities Cover Up Child Abuse by Muslim Grooming Gangs
Surprisingly, Barnevernet did not take the psychiatrist's children away, since they regard him as an "outstanding scientist" and "honored specialist," the lawyer remarked.

According to Forbes, the Norwegian government's practice of violating the rights for family life was first brought into the spotlight by the ECHR in 1996. The media outlet noted that Barnevernet's "excessive intervention" in family affairs, especially in relation to foreign parents, had already triggered an international outcry.

In 2014 the Russian Investigative Committee launched an inquiry into the numerous cases of confiscation of children from Russian families living in Norway and their placement in protective custody.

In 2015 the Czech Republic's president, Milos Zeman, called upon the King of Norway, Harald V, asking him to help return two Czech boys who had earlier been taken from their parents and placed in foster care.

Requiem for a Drug Policy: Norway to Take on Narcotics With…Free Heroin

Norway to Ban Full-Face Veils at Schools From August