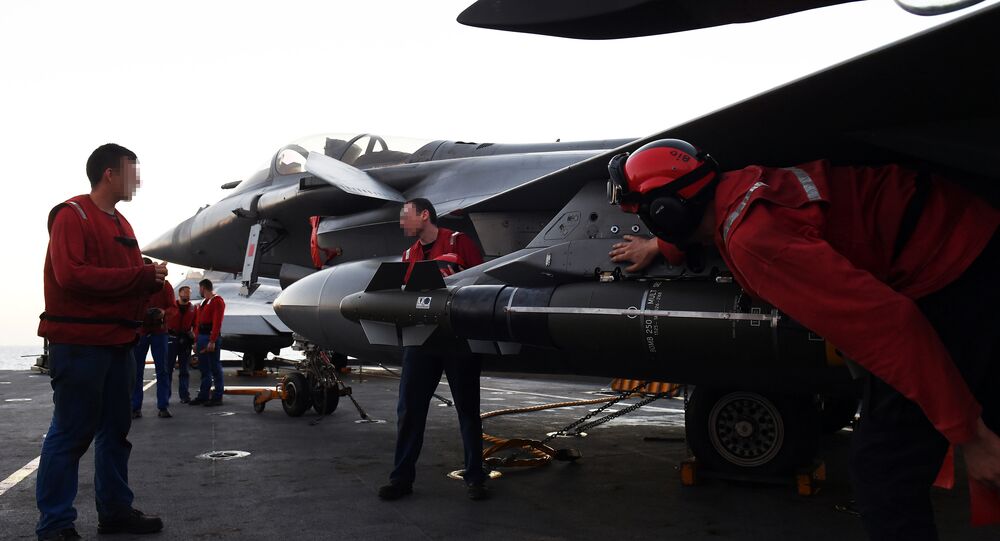 Commenting on a recent statement made by Emmanuel Macron about the possibility of new strikes against Syria, Paris-based American reporter and media consultant Socrates George Kazolias explained the nature of the president’s message to Radio Sputnik.

Radio Sputnik: Macron also said that he supports further airstrikes in Syria in the case of a chemical attack. What are your thoughts on that? Just as foreign specialists arrived in the Idlib de-escalation zone, how likely is any provocation to take place in your view?

Socrates George Kazolias: What I think was clear and what Macron was saying is that he wants to protect the rebels in Idlib from Syrian government attack; he wants to preserve that enclave. And so I think that’s how I read what he said.

© AP Photo / Remy de la Mauviniere
Macron: France Ready to Conduct New Strikes on Syria if Chemical Weapons Used
It’s interesting that he said that given the investigation in April by the Organization for the Prevention of Chemical Weapons was inconclusive and actually all of these chemical attacks had contradictory information coming out about them, including from Western reporters, people like Seymour Hersh or Robert Fisk.

So my reading is that it is a clear warning to the Syrian government that despite the fact that Macron accepts that Damascus has won the war, they’re not ready to totally abandon the rebels in Syria.

Radio Sputnik: Macron also said that allowing Assad to stay in power is a terrible mistake. Do you think that the French are prepared to try to instigate some kind of regime change?

Socrates George Kazolias: No, I don’t think that French public opinion is behind regime change. And it’s unfortunate that no one speaks of the February 2012 referendum on a new constitution in Syria, yet everything that they’re suggesting as a solution to the crisis in Syria institutes a, well, a constitution.

It’s just doesn’t make any sense and I’m really upset with Western press that they haven’t pointed this out – that constitution called for multi-party elections.

Radio Sputnik: What needs to be done for that constitution to really be upheld and for those elections to happen?

Socrates George Kazolias: I think that the Syrian government has to retake its territory, the rebels have to lay down their arms, the criminals have to be prosecuted, and foreign armies in the country who were not invited have to get out – that means the United States and Turkey, for example.