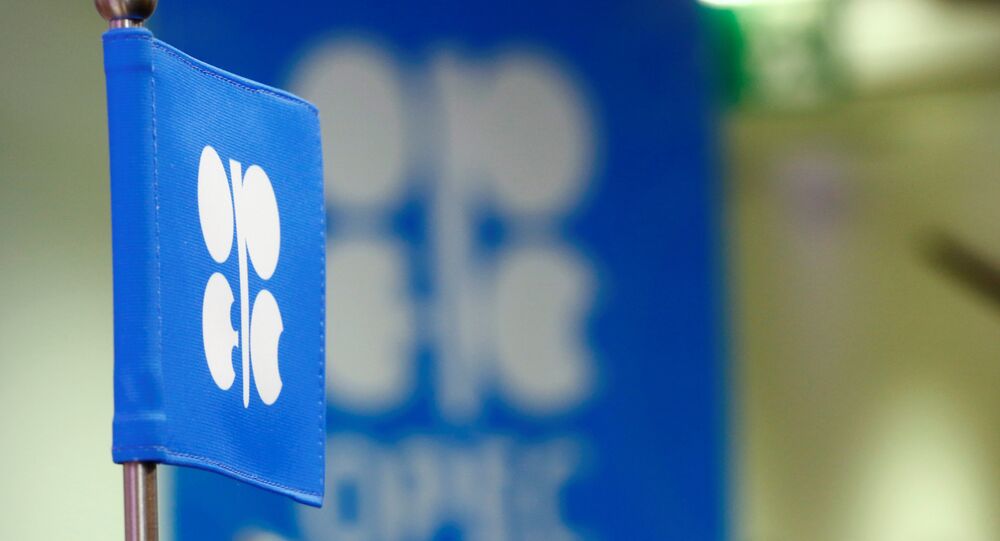 Iran and OPEC: How Will the Fight for Oil Production Quotas End?

Iran, which only recently received the right to freely trade its oil, is extremely dissatisfied with the fact that OPEC and a number of non-member countries, including Russia, which agreed at the end of 2016 to reduce oil production by 1.8 million barrels per day, are now redistributing quotas.

Just several months ago, at the end of June, OPEC and non-OPEC countries agreed to boost crude oil production starting July returning to previously agreed output cuts, after months of underproduction, but didn’t specify how exactly the production increase would be split between OPEC and non-OPEC nations.

© AP Photo / Ronald Zak
Iran Says Some OPEC Members Work in US Interests
The most basic discontent and concern of Iran in this situation is precisely the work of the OPEC+ monitoring committee to control the production of each country in accordance with its quota, Seyyed Saeed Mirtorabi Hosseini, an Iranian oil and gas analyst, from Kharazmi University told Sputnik.

“OPEC production quotas are a formal agreement between states that must be formally observed by all members of the organization, depending on the capability of each individual exporting country. However, in practice this is not always the case. For example, Saudi Arabia, the world's largest oil exporter, as well as its allies from the Cooperation Council of the Arab States of the Persian Gulf (GCC), cast a shadow over the agreements reached within OPEC. And other members are forced to inevitably coordinate their actions with the decisions of the OPEC monopolist – the Kingdom of Saudi Arabia,” Mirtorabi explained.

“Iran can act within the framework of formal agreements and express diplomatic protest against some countries exceeding their production level approved in 2016, as well as the redistribution of quotas and the work of the OPEC monitoring committee, but in practice this will not change anything. Past experience has shown, unfortunately, that in OPEC its main monopolist – Saudi Arabia – has the final say.”

The expert noted that in such a difficult situation that's developed within OPEC, Russia, which has good relations with Iran, can quite possibly act as a moderator:

“If we return to the issue of freezing oil output at the 2016 level, which was raised by the OPEC countries, the Russian Federation supported the position of Iran: the Islamic Republic oil production fell due to international sanctions, and now it wants to increase it, at least to the pre-sanctions level and 'not to freeze it.' Moscow insisted that Iran should be exempt from the list of those countries that agreed to freeze their output. And given the fact that Iran and Russia have a strategic partnership on a number of important issues, we expect that Moscow will support us in the framework of the OPEC +, despite separate agreements with Saudi Arabia.”

© Sputnik / Sergey Guneev
US Congress's New Bill Targets OPEC, Russia, Non-OPEC Oil Alliance
Tehran's oil quota concerns are fully justified, since the production of "black gold" by the Islamic Republic of Iran, as well as, its trade, can end up entangled in traps set by President Trump, which he intends to place on all fronts of the oil industry starting November 4 this year. The US president intends to impose an embargo on Iranian oil by restoring sanctions against Iran and this way wants to cut off the main source of income of the Iranian economy.

Is it worth it for Iran to start a “battle” with OPEC in these difficult circumstances? According to Manouchehr Takin, an independent oil and energy consultant and former senior officer at OPEC, in spite of everything, Iran will be able to maintain its oil exports, albeit in smaller volume, and the disagreements with OPEC will be solved without any scandals:

“The news published by the media about alleged tension with Iran inside OPEC only adds fuel to the fire. But in fact, there is only a disagreement on the stance that countries have on oil prices and the volume of production. But anyway, the ministers of the OPEC member countries will unambiguously reach a compromise and a consensus. And Iran will not lose its share. Now the US is trying to paralyze the supply of Iranian oil, in particular, they are imposing an embargo in November. But the export of Iranian oil is still underway, although the United States is trying to exert pressure on some countries, for example, intimidating India.

Yes, there will be problems, the production of Iranian oil may fall, but it can find detours, there will not be a complete paralysis of oil exports.”

Partially agreeing with the Iranian expert on this issue is Raiffeisen Bank's oil and gas sector analyst Andrey Polishchuk. However, Mr Polishchuk explained that Iran has no reason to hope that the OPEC+ June decision on quotas will be reviewed:

“The agreement reached in June will expire this year. No one will revise it. It is important to remember that there's a right of veto in OPEC, although this veto can be considered a kind of conditional procedure, because within the organization, if a country fails to fulfill its obligations, there is no punishment. That means that any agreements reached in OPEC can be considered a gentleman's agreement. Therefore, each country has the right of veto, including Iran. But since Iran did not use it during the OPEC+ meeting, this means that it agreed with the decision.

“It is possible to assume that since November it may decrease, given past experience of oil sanctions against Iran, but not in large volumes, as Tehran has already adjusted, established production and knows its partners – who are ready to buy its oil bypassing sanctions and with a good discount,” Mr Polishchuk concluded.