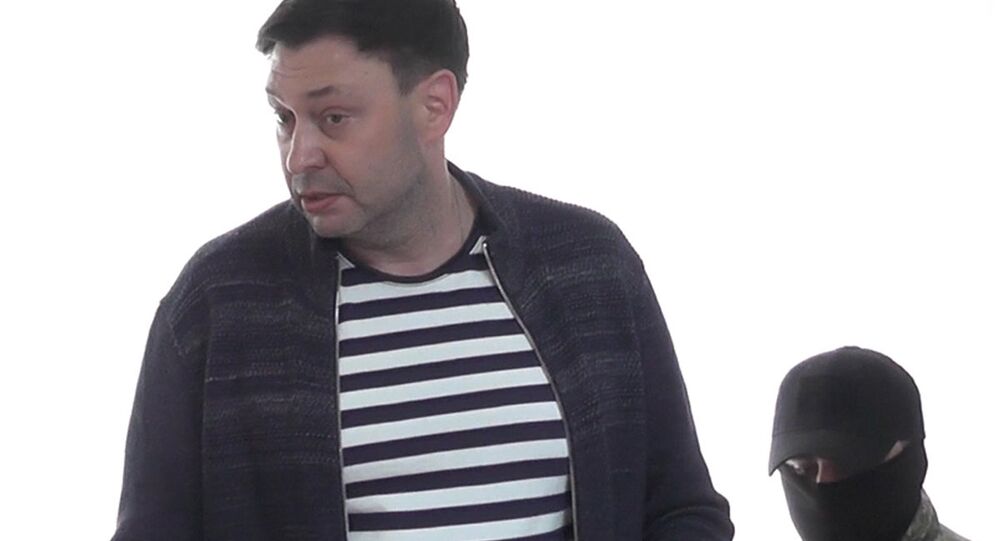 Friday marks the 100th day since the arrest of Kirill Vyshinsky, the head of the RIA Novosti Ukraine portal, by Ukrainian authorities. Sputnik discussed this with Dragana Trifkovic, head of the Belgrade-based Center for Geostrategic Studies.

Sputnik: After 100 days in confinement what is known about Vyshinsky and the prospects of him being released?

Dragana Trifkovic: Unfortunately, we didn’t learn much about the arrest of Mr. Vyshinsky except the scarce explanations given immediately after the arrest that he was charged with high treason. Ukraine has been in a deep systemic crisis for years, and such cases only deepen this crisis and send a very bad picture to the world. I think that the international community should much more seriously deal with the issue of human rights in Ukraine. It is impermissible that they close their eyes in such cases. It is difficult to assess when Mr. Vyshinsky will be released because Ukraine does not adhere to international rules and norms when it comes to media freedom and the right of journalists to perform their job unhindered. We can only hope that the international public will take a clearer stand on this case and will demand that Ukraine respects human rights.

Sputnik: In your view, what are the main reasons behind his confinement now?

© Sputnik
Ukraine's Detention of Vyshinsky Political Act, Violates Int'l Law - Independent Journalist
Dragana Trifkovic: I do not think that there is really no reason Mr. Vyshinsky’s arrest and that there are no reasonable doubts. It looks like a frame-up with the aim of extinguishing the Russian media. In my opinion, the Russian media are professional and objective, but this is not in line with the anti-Russian propaganda that is being conducted. I hear this assessment of Russian media from many colleagues from the West, who are increasingly being informed by Russian sources. Today, due to technological advancement, communication is accessible to everyone and accelerated, but the big problem remains the disinformation of the public through the false news.

Dragana Trifkovic: In my opinion, Ukraine, with its anti-Russian politics, and it is not too harsh to say also with its hysteria, is trying to draw attention from its own problems. I think that there was a blackmailing attitude towards Russia before, but when the capacity for such a relationship was lost, Ukraine, instead of looking at real positions, began to carry out an aggressive policy towards Russia and the Russian population in Ukraine. It is as if the anger of their own insentience turned into an anti-Russian hysteria circle through which Ukraine sees the culprit for everything in Russia. It's completely surreal, and someone who sees it and analyzes it from outside can get really terrified.

Dragana Trifkovic: The Western media are silent about this case, but also about many other cases of human rights violations that they do not feel concerned about. There are obviously double standards in relation to the implementation of human rights standards. In the past, there were many cases where this topic was used for propaganda purposes by the West and where it was used as a cover for human rights violations. Such things are unacceptable. We as a "global society" today have to return to the framework of international law, respecting norms and respecting ethical and moral values. We also have an obligation to return to professionalism, especially in journalism. It is not right that some rules apply to the Western media, and other rules to the non-western media. The agency RIA Novosti has the right to exist and work, just like the BBC, CNN or any other media, if they do their job professionally and responsibly. Democracy is not just some mantra that needs to be repeated without any sense, but it should be proven in action.

Sputnik: What other measures could have been taken and can still be taken to speed up the process of his release?

© Sputnik / Vladimir Trefilov
Researcher Sees Double Standard in Western Media's Response to Vyshinsky's Detention in Ukraine
Dragana Trifkovic: First and foremost, I think that it is necessary in all possible ways to inform the worldwide public about this case. Also, the Association of Journalists of Russia should contact the associations of journalists in other countries, to inform them about this case and to seek help and support. No one can better understand the problem with which Mr. Vyshinsky’s is confronted, from the journalists themselves. Colleagues from other countries should show solidarity, perhaps protest if they consider it to be just. I believe that they can put themselves in such a position, and be convinced that they would also need help that they were in Mr. Vyshinsky’s shoes. In addition, it is important that Russia seeks all legal remedies that can be applied internationally.