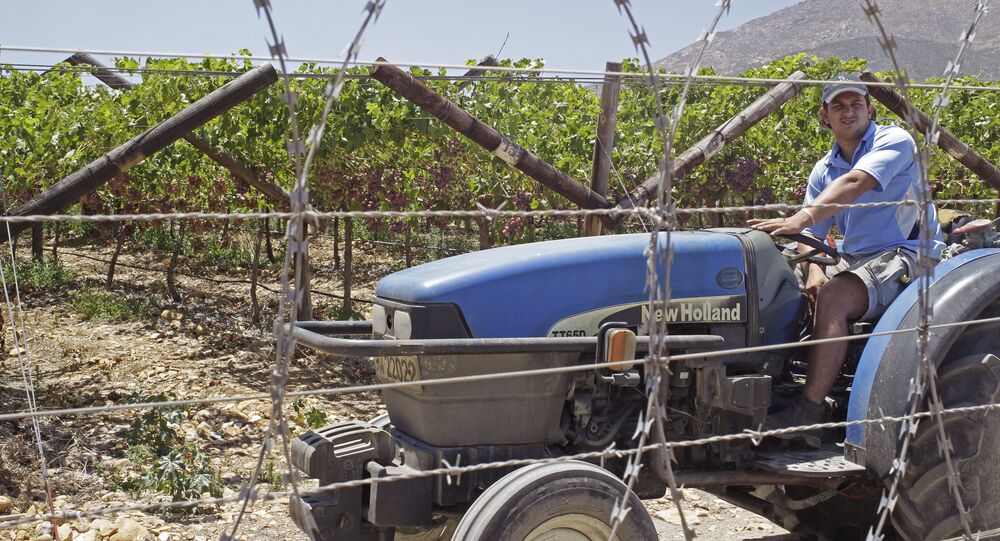 As the South African government moves toward implementing its plans to expropriate white-owned farms and distribute them to black Africans, US President Donald Trump has become the latest international leader to express solidarity with the white farmers.

As the South African government moves toward implementing its plans to expropriate white-owned farms and distribute them to black Africans, US President Donald Trump has become the latest international leader to express solidarity with the white farmers.

A leading historian told Radio Sputnik Thursday that Trump's statement is "part of a canard that's being spread" that "whites are under siege" — a sentiment that invigorates Trump's base.

When Cyril Ramaphosa assumed the South African presidency in February 2018, he said at his inauguration that he planned to speed up the transfer of land to the still-largely-dispossessed black population in order to to ensure food production and security.

The land reform debate in Parliament was launched by the Economic Freedom Fighters party, whose leader, Julius Malema, said February 27 "it was time for justice" on the land issue.

"We must ensure that we restore the dignity of our people without compensating the criminals who stole our land," he said, Sputnik reported at the time.

The motion passed on February 27 by a large majority, and Parliament created a committee to review the country's constitution and report back by August 30 whether or not uncompensated expropriation was legal under current South African law, Reuters noted. Even though South Africa passed a law allowing land expropriation in 2016, Ramaphosa said that he believes that the constitution should be "more explicit" on the issue, Sputnik reported.

On August 1, Ramaphosa, who leads the African National Congress, announced his intention to push forward with land reform, identifying 139 farms for seizure, although no land has been taken as of yet.

Time Magazine pointed out Thursday that in reality, killings of South African farmers of any race are actually at their lowest levels in a generation. In 2017, 47 farmers were killed, according to the Guardian, down from a peak of 153 in 1998. Time pointed out that the South African government doesn't keep statistics about either the race of murder victims or the motives for murders, so attributing those numbers to either the murder of white farmers or to having been caused by the government's moves toward expropriation is impossible.

Then on August 22, following an episode of Fox News host Tucker Carlson's show in which he claimed that Ramaphosa was "seizing land from his own citizens because they are the wrong skin color," Trump threw his hat into the ring with a tweet announcing he was assigning Secretary of State Mike Pompeo to "closely study" the land seizure and supposedly associated killing of white farmers.

South Africa totally rejects this narrow perception which only seeks to divide our nation and reminds us of our colonial past. #landexpropriation @realDonaldTrump @PresidencyZA

​"I think we should ask very deep, searching and profound questions as to why Mr. Trump feels that raising a question of saving the bacon, if you like, of farmers across the Atlantic in South Africa, will somehow titillate his base," Gerald Horne, professor of history at the University of Houston and author of many books, including "From the Barrel of a Gun: The United States and the War against Zimbabwe," told Radio Sputnik's Loud & Clear Thursday.

"I say, that we may come to the conclusion that there was a premature declaration of victory in this country over US-stye Apartheid and the sentiment that undergirded it, and Mr. Trump recognizes that fact more than most, which is why he continually raises the sensitive issues of race and racism, not only with regard to South Africa, but with regard to National Football League athletes who are predominantly African-American," the historian told hosts John Kiriakou and Brian Becker.

​"But he's also playing with fire because this question of land is a very touchy and sensitive one. I'm sure you know what's transpired across the border in Zimbabwe, which by the way out of a population of 17 million only has about 100,000 of European descent, whereas in South Africa, out of a population of about 50 to 55 million, there are about 4 to 5 million of European descent, and when Zimbabwe moved towards land reform and seizing the land of that European minority, it caused all hell to break loose, in terms of sanctions being imposed by the United States, which were just reimposed in the last few weeks. And the South African situation is even more dangerous, even more sensitive, and I would hope and trust that Congress would move to censure Mr. Trump for interfering so grossly in the internal affairs of a sovereign state."

Horne noted, "Trump is not alone in his interference in the internal affairs of South Africa. Recall that just a few months ago, Peter Dutton, who was a part of the cabinet in Australia… in March, he said that Australia should put on the fast track visas for farmers of European ancestry who supposedly are being persecuted and terrorized."

South Africa: The Rise of Ramaphosa

On March 14, Dutton, then Australia's minister of home affairs, told the Daily Telegraph that his department was looking to fast-track visa or other programs that have "potential to help some of these people."

"If you look at the footage and read the stories, you hear the accounts, it's a horrific circumstance they face," Dutton said. "They do do need help from a civilised country like ours."

"So we see that there's a kind of ‘White International' erupting, a white reactionary international, which I dare say also carries the seeds of fascism, particularly given the unsettled history in South Africa. Where by the way, the European invasion commenced in 1652, as opposed to the 1890s in Zimbabwe — once Rhodesia — which suggests that the roots of white supremacy and racism are much deeper in South Africa, and this external interference in the affairs of South Africa is quite dangerous, and I hope that these politicians are reminded of the danger of what they're doing."

Horne noted that land reform is not merely an issue in South Africa but all across the continent, with the question being taken up recently in neighboring Namibia as well, which was occupied by South Africa for most of the 20th century, as well as in Kenya and Algeria, all of which share the common experience of settler-colonialism. "[R]ecall that one of the reasons why the wars in southern Africa were so bloody was precisely because of settler-colonialism — that is to say, Europeans, invading that part of Africa, digging deep roots there," he said.

Noting the incredibly bloody war fought in Algeria between 1954 and 1962 between native Algerians and French "pieds noirs" settlers, Horne said that "Mr. Trump is playing with dynamite, and I hope that Congress intervenes in order to bring him to his senses." He also said he hopes and expects Pompeo to quietly ignore Trump's request to investigate, and that Trump's "slight attention span" will move onto another topic soon.

"This is part of a canard that's being spread, not only in South Africa but also in the United States, that those who are defined as white are under siege, and therefore, because they are under siege, they can take extreme measures, if you like, to defend themselves." Horne noted that police killings in the US and police being called or intervening to evict or arrest nonwhite people in Starbucks or other public places serve as examples of this logic, as does the attraction of "such simplistic slogans as ‘Make America Great Again.'" He noted that this refers to returning to "the days of yesteryear, when Jim Crow stalked the land."

Horne further noted that the United States itself was "borne in a revolt against the abolition of slavery" and the Proclamation of 1763, which limited the westward expansion of European settlers and stopped them from seizing further Native American land.

"In other words, this country was born in a white supremacist revolt, and because we haven't honestly confronted that ugly history, it leaves us ill-prepared to confront these kinds of episodes that we see today, where Donald J. Trump feels that he can stir up his base by appealing to the most primitive and reactionary racist sentiments. Until we come to grips with that history, we won't be able to come to grips with this ugly reality we're now confronting."

South Africa: The Rise of Ramaphosa