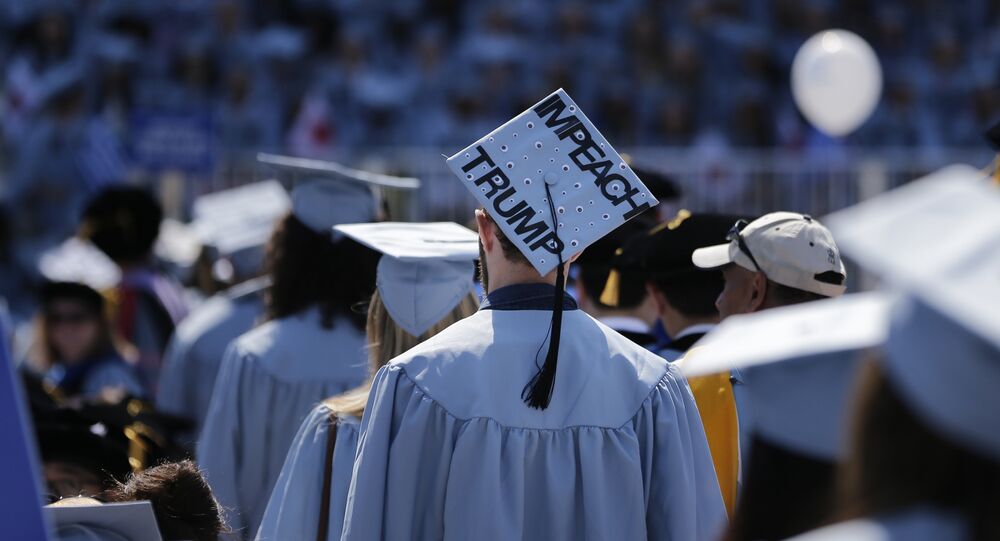 On Tuesday two associates of US President Donald Trump, his lawyer Michael Cohen and former campaign manager Paul Manafort, were both found guilty of or pleaded guilty to a slew of charges for financial crimes. However, those crimes were discovered by the Russiagate investigation - so what’s the connection?

If you watched the mainstream media, you could be forgiven for thinking that special counsel Robert Mueller's investigation into possible collusion between Trump's election team and Russian actors was closing in on its final target. "That was the coverage on MSNBC and elsewhere yesterday, that ‘this is it, this is the impeachment moment,'" Joe Lauria, the editor-in-chief of Consortium News, told Radio Sputnik's Loud & Clear Wednesday.

This is "so tangential to what we thought the Mueller investigation was supposed to be about," Dan Kovalik, a human rights and labour lawyer who is the author of the book "The Plot to Attack Iran," replied.

​Cohen's lawyer said later Tuesday that Trump had directed him to perform some of those actions by paying off porn star Stormy Daniels and Playboy model Karen McDougal not to expose their liaisons with then-candidate Trump years prior, Sputnik reported. "Michael Cohen took this step today so that his family can move on to the next chapter," Cohen lawyer Lanny Davis said in a statement. "This is Michael fulfilling his promise made on July 2 to put his family and country first and tell the truth about Donald Trump. Today he stood up and testified under oath that Donald Trump directed him to commit a crime by making payments to two women for the principal purpose of influencing an election."

However, "these convictions would not have happened if Hillary Clinton had been elected president," pointed out Jim Kavanagh, the editor of thepolemicist.net, who was part of the same interview as Lauria and Kovalik. "All of these crimes that took place years before the election… would never have been investigated, because everything would have been right with the political world, and nobody would have thought it was necessary to go and look for them… these are the kinds of things that go on… among the financial elite all the time… the only reason they have come out is Donald Trump is president, and they want to get Donald Trump."

That, he said, is why Robert Mueller's investigation was created and empowered to look wherever necessary in order to find enough dirt to "get" Trump.

Kavanagh further not that, by comparing this situation to Watergate, the Democrats have so riled up their base that they've painted themselves into a corner and will be forced to seek impeachment. "I don't think the Democrats really wanna do that. I don't think they really think they can succeed in it in the Senate, and I think doing it is going to create such a mess politically… If you are going to start bringing charges against anybody who's been a parasite on the political process — the whole political culture is run by consultants who make millions of dollars like Manafort did, and hide money in bank accounts — you're gonna go after a lot of people."

Lauria noted that "The New York Times is so driven, as the rest of the Democratic media is, to have Michael Pence be our president… he would be far worse than Trump for a number of reasons… Pence is more organized and has great ties inside Congress; he could drive through an extremist GOP agenda a lot better than the chaotic Trump could."

Kavanagh agreed, saying, "The whole impeachment thing, if you think about it, has no place to go that's good. If the Democrats lose it, then they just look like fools. If they win it, the Trump base" will feel the election results were overturned and stolen from them, and if they force Trump to resign of convict him, then they'll "find themselves with a Pence presidency" and be disillusioned by that fact, sending more and more people out of the electoral system entirely.

"It's going to be the thing that disrupts the system, much more than Facebook ads from Russian troll farms," Kavanagh noted. "This whole process would disrupt the system in a very powerful way."