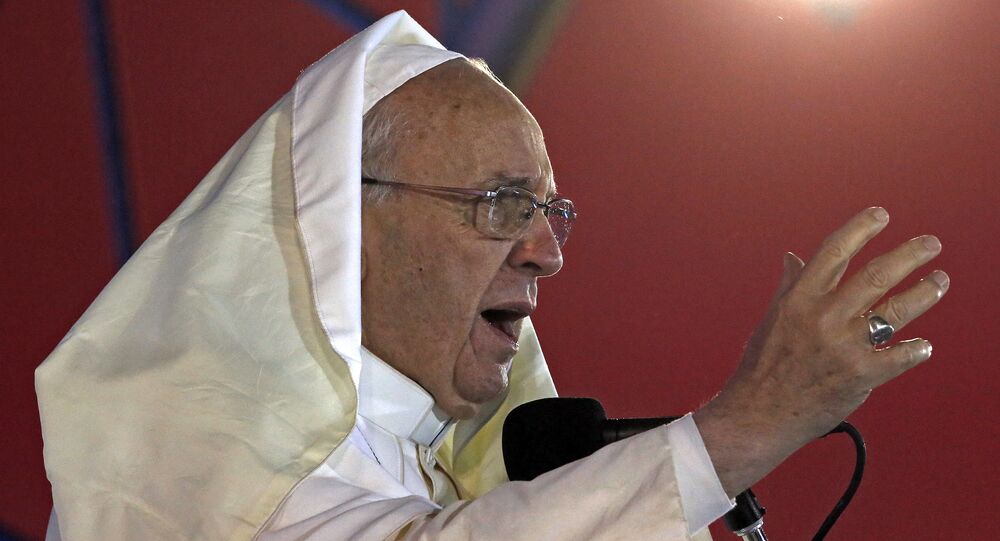 © AP Photo / Niall Carson/PA
People in Ireland Increasingly 'Doubt Catholic Church's Authority' - Scholar
Sputnik: The Pope strongly condemned sex abuse in the Church saying that the issue was long ignored. But how has the clergy managed to cover up these crimes?

Thomas Groome: I think when he speaks about the clericalism in that letter, that’s very significant because in a sense he’s asking the church to go to the disease, rather than to the symptom. And in many ways we’ve been treating the symptoms, which is important to do. In other words, the cases of violence and crime against children the priests have committed that has to be addressed indeed, but then going to the source of that problem has to lead the church to ask why, why is it happening? Why so many cases among Catholic clergy? And I think that’s when he begins to talk about clericalism, which is a difficult thing to explain, or to name, or define, and yet it is a sense of elitism, on the part of our ordained members; people who are priests and bishops, and so on. It’s a certain kind of elitism, a certain kind of preference, deference, pedestalizing and it’s also a diminishment of the baptized. In other words, there’s no lay participation or leadership in the Catholic Church of any significance. There’s very little participation, in other words. Ordination is the first round of the ladder to participation in the governance of the church, whereas it should be baptism. And so the Pope is challenging the whole culture that surrounds Catholic priesthood. I think in that this letter is significant because that's where we need to go. We need to treat the symptoms, but more important, we need to treat the disease.

Thomas Groome: We have made some progress. So there is hope, at least, and I'm speaking out here for the United States. The Catholic bishops in the United States in 2002 put in place a significant program called the Dallas Charter for the Protection of Children and that put in place, in many ways, procedures that would oversee and punish the crimes of priests when they would commit them against children and it was a step in that direction. And indeed many priests were forced out of the ministry, forced to resign, reported to the police and so on. The shortcoming of the Dallas Agreement was that there was no procedures there for holding bishops accountable and many bishops were not accountable. They overlooked, covered up, or simply denied the situation, and didn’t pursue it. So negligent bishops are really the cutting edge now; how does the church review the negligent bishops in this regard. Pope Francis‘s letter hints at that. It calls for certain tribunals as necessary or something like that. I think he has to go beyond that. The letter was welcomed and I think it is a step forward, a promising one, but now he has to put in place the juridical, judicial procedures that would review and hold accountable bishops in how they implement the protection of children. And that’s what’s lacking so far.

© AP Photo / Alessandra Tarantino
Australia Catholic Church's Child Protection Body Allowed to Keep Audits Secret
Sputnik: What implications could it have on the Catholic Church image, I think we know what the answer to that one is, but how likely is a real thorough investigation to follow? Is that likely to happen?

Thomas Groome: I think a thorough investigation will happen. I think we’re certainly moving, the church moves slowly. I think this report out of Pennsylvania will be a catalyst toward a much more aggressive program towards reform and renewal. And I suppose, I think this is a dreadful embarrassment to the Catholic Church, but I think most Catholics realize and are able to distinguish between their faith and the institution that represents their faith, namely the Church. And it’s a deeply life-giving faith, the values proclaimed by Jesus of Nazareth are powerful, wonderful life-giving values. There’s no better way to live one’s life than the values and truths and wisdom proclaimed and modelled by Jesus. I think Catholics know that their faith, that this type of thinking can shake anybody's faith, and yet, our faith is not in the Church per se, it’s in Jesus, in the Gospel and in our Catholic faith tradition. And it’s still a very rich live-giving tradition. So this is why it is so embarrassing, so tragic that it is so poorly represented now by this in the public forum. But I think most Catholics will be able to hang in and know that their faith is deeper than the failures of their Church.