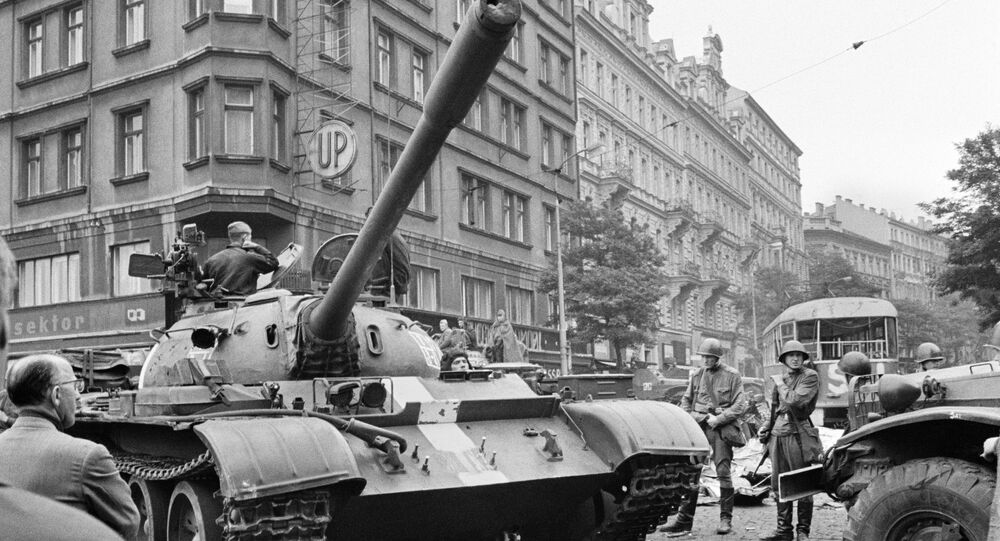 The 1968 Prague Spring, initiated by the then leader of Czechoslovakia, Alexander Dubcek, was abruptly ended by an intervention of the Warsaw Pact countries. Speaking to Sputnik, Czech writer and eyewitness of the events, Milan Syrucek, recalled how the situation unfolded.

Exactly 50 years ago, Soviet tanks entered the Czechoslovak capital bringing the Prague Spring to a halt. Speaking to Sputnik, Milan Syrucek, a famous Czech writer and eyewitness of the 1968 Warsaw Pact intervention says that one should not equate the Russian Federation to the USSR.

"The current generation is not responsible for the deeds of its ancestors," Syrucek told Sputnik Czech Republic. "Mostly, it concerns politics. They cannot bear the burden of any legacy, whatever it is. A new policy must be created. Even the late Soviet Union condemned the aggression, but, probably, later than the Bulgarians, Hungarians, Poles, etc. This chapter of history, however, has been closed. I believe that it's wrong to speculate about it after 50 years has passed. At least because there is no one left who made this decision."

© Sputnik / Vladimir Astapkovich
Arab Dawn: How USSR Helped Middle East Get Rid of Colonial Pressure
Syrucek, who at that time held the position of editor-in-chief of the newspaper Mladá fronta (Young Front), recalled that the most vivid memory of the August 1968 events was his conversation with Russian correspondents from Izvestia and Komsomolskaya Pravda on the heels of the invasion. Two journalists, who used to work in Czechoslovakia, refused to cover the events under the pretext of being ill. One of them, Andrey Krushinsky of Komsomolskaya Pravda, intentionally got into a car accident not to write about the intervention.

"[Krushinsky] knew the Czechoslovak reality and he knew that there had been no counter-revolution or anti-socialist actions, therefore he deliberately crashed into a pole, was wounded and was kept in the hospital all the time [of the Warsaw Pact invasion]," the Czech writer said.

According to Syrucek, he was informed about the incursion the night of August 20, 1968.

"On the night of August 20-21, I worked as the editor-in-chief of the Cezh edition of Mlada fronta," the writer recalled. "Having finished before midnight I went home where my angst-ridden wife told me that she had heard on the radio that Warsaw Pact countries troops had entered out territory."

© Sputnik / Sergey Guneev
Czech Diplomat: Europe Has No Legal Means to Stop Nord Stream 2 Pipeline Project
He immediately returned to the newspaper's headquarters. Syrucek and his colleagues released a new issue of Mlada fronta at 5:30 a.m. (GMT+2) on August 21, 1968, with comments from the Central Committee of the Communist Party and photographs of Soviet tanks in Prague's streets.

"At 9:00 a.m. I called to the office again, being ready to return in case everyone was there. They told me not to return, because Soviet soldiers occupied the editorial headquarters," he said.

Although the event came as a shock to Syrucek, it didn't catch him by surprise. The thing is the writer had been informed about the potential Soviet operation in Czechoslovakia about five months before it was launched.

In April 1968, the Czech writer visited his friend, Vladimir Ponizovsky, a Komsomolskaya Pravda journalist. The Russian reporter who had sources in the General Staff of the Soviet Army told Syrucek that in Dresden, then part of the German Democratic Republic, Soviet military divisions were planning an intervention into Czechoslovakia.

Syrucek rushed to pass this information to Alexander Dubcek, who served as the first secretary of the presidium of the Central Committee of the Communist Party of Czechoslovakia between January 1968 and April 1969.

"We had known each other for a long time. In addition, I wrote about the history of Intergelpault, where he grew up with his parents. So we met," the Czech writer explained.

© Sputnik / V. Kiselev
Russia Bewildered at Afghanistan Expecting Apologies for Soviet Campaign
Dubcek refused to believe the news: "Milan, it's impossible," he said. "My intelligence service did not tell me anything." However, the impossible turned into reality a few months later, the Czech writer underscored.

The Prague Spring was a short period of political liberalization in Czechoslovakia, then part of the Warsaw Pact camp, under Alexander Dubcek who granted certain freedoms to the citizens of the country. These measures also included the decentralization of administrative authorities. However, Dubcek's reforms had not been approved by Czechoslovakia's Warsaw Pact allies, which led to the August intervention. Soviet troops did not meet any military resistance and after an eight-month period, the new Czechoslovak leadership reversed almost all of Dubcek's reforms. The Velvet Revolution of 1989 ended Communist rule in the country.