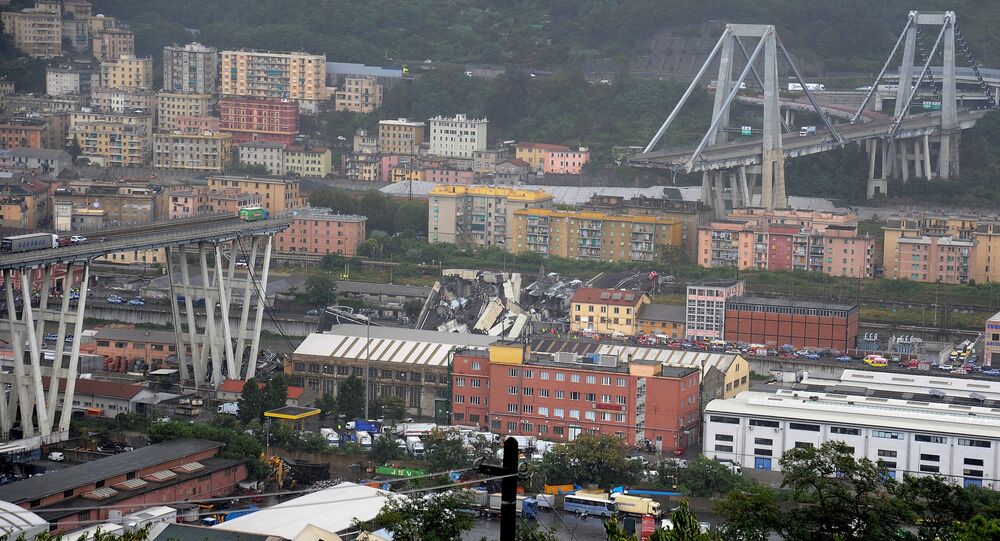 The European Commission has hit back at Italy’s populist government after it suggested that EU spending limits could be responsible for the Genoa motorway bridge collapse that killed dozens of people.

The row came as Italy's ministry of transport launched an investigation into the company responsible for maintaining the motorway, ordering the firm to commit to rebuilding the bridge at its own expense.

A spokesperson for Commission president Jean-Claude Juncker told reporters in Brussels the EU had in fact formally told Italy to improve its infrastructure, given it billions in development funds, and even signed off on a plan to specifically improve the motorways around Genoa.

© REUTERS / Stefano Rellandini
Italy Sets Up Commission to Probe Causes of Genoa Bridge Collapse
Matteo Salvini, the leader of the far-right League party and now the country’s interior minister, had suggested that the EU’s fiscal rules could have hampered investment.

Sputnik spoke to Philip Gomm, Head of External Communications at the RAC Foundation about if something that happened in Genoa happen elsewhere after a report last year claimed thousands of council-maintained road bridges in Britain are substandard and not fit to bear the weight of the heaviest Lorries.

Sputnik: How likely is it that an event like the one in Italy could happen here?

Philip Gomm: The authorities are keen to reassure what happened in Italy won’t happen here in UK. We don’t have bridges that are same design or same standard or substandard as that one that collapsed.

Highways England which operates major roads, the motor ways and A roads in this country say that have 21,000 structures on the network and they inspect these every two years and will undertake principle inspections on a slightly less regular basis, and where they feel is a need.

© REUTERS / Stringer
Some Speculate Corruption Behind Genoa Bridge Collapse - Journalist
They would say they know what they’ve got, they know what condition they are in and some of those bridges might have to operate with weight restrictions.

Sputnik: After the events in Italy should the UK check how it monitors roads?

Philip Gomm: Traffic and travel landscape in this country has changed dramatically over the last 40,50,60 years, if you go back to after World War II, there were 2 million cars in the UK, today there are more than 30 million cars.

Traffic volumes are at record levels and that clearly takes a toll on infrastructure. Our climate also is less reliable, we are seeing more extreme weather events, whether that are wind, rain, snow and that too will the infrastructure.

© REUTERS / Italian Firefighters Press Office
Genoa Tragedy Takes Lives of Entire Family
We are not in a situation where all of our bridges are about to fall down, but we are in a situation where the network is under very heavy use, and we need to look at what impact this is having on the structures.

Sputnik: How do the RAC view the incidents in Genoa?

Philip Gomm: I don’t have a view on what’s happened in Italy other than it’s a tragedy, but it does show that if you are in charge of major pieces of infrastructure, major pieces of road network, that are heavily used, more than they were perhaps ever designed for in the first place, you need to keep on top of maintenance schedule.

We in this country often think road maintenance is down to just filling in the pot holes or cutting the verges, we know from experience that responsibility and what is required goes beyond that, not least to make sure the bridges we have, the 20,000 on the main road network and then 10’s of thousands on the local road network, need to be inspected and where there are faults found the money needs to be found to rectify.

Views and opinions expressed in this article are those of Philip Gomm and do not necessarily reflect those of Sputnik.