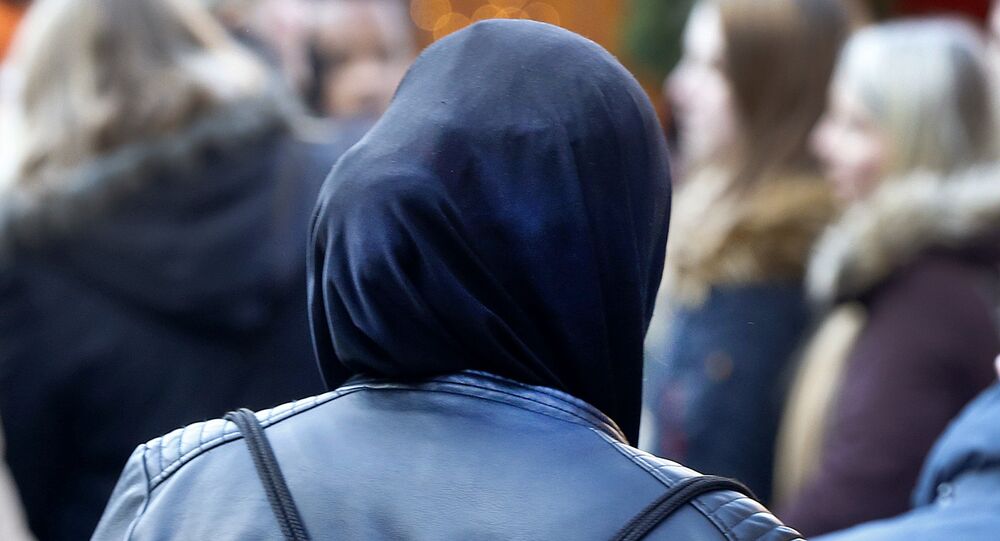 BRUSSELS (Sputnik), Luc Rivet - The Islamic faith, at least the Salafi and Wahhabi versions of it, imposes everyday rules that are perceived by other communities in Europe as disruptive to society.

These rules require women wearing a niqab or full veil in public; women precluded from shaking hands or being examined by a male doctor or in the absence of the husband; and more recently, the wearing of burkinis in public swimming pools, where long trunks and other large pieces of clothing are normally forbidden for hygienic reasons.

The reaction to these rules is a marker of a growing rejection of the Islamic faith in Europe. The niqab is controversial. France was the first country to pass laws in order to forbid the niqab and all other forms of full veils, including the hijab and burqa, which covers the whole body from the top of the head to the ground with a cloth grille in the hood to allow the wearer to see in front of her.

© AFP 2020 / PHILIPPE HUGUEN
'My Hero' vs 'Racist': Public Divided Over UK Bus Driver Who Confronted Niqab
Moreover, the 2004 French law not only targeted the niqab, but any religious emblems and items in schools — kippas for Jews or large crosses for Christians. But, it was the Muslim clothing that became at the center of the debate.

In July 2010, the French National Assembly passed an act prohibiting people from concealing their faces in public spaces. Violators were now subject to fines of up to 150 euros ($171.14 at current rates) and mandatory classes on French citizenship. Anyone found to have forced a woman to wear a religious garment faced up to two years in prison as well as a 60,000 euro fine.

Then President of France Nicolas Sarkozy publicly stated that "the burqa is not welcome in France because it is contrary to our values and the ideals we have of a woman's dignity. The French government sees this as a way to successfully ease Muslims into French society and to promote gender equality."

Since then, the debate has been raging in Europe, with all populist parties demanding that the niqab to be banned in public places. More recently, calls for a burkini ban on beaches and in swimming pools have emerged.

At the beginning of August, Denmark became the fifth country in Europe to ban the niqab in public places, despite protests from the Islamic World League. The Guardian reported an incident where a Danish woman in early August tried to tear a niqab off the face of a Muslim woman. The police intervened and fined the Muslim woman 140 euros.

France, Belgium, Austria, the Netherlands and Bulgaria have passed similar laws, at least to ban these Muslim garments from schools, but many towns and local districts, such as tourist locations and beach resorts, in other European countries have banned the full veil.

In Germany, the Alternative for Germany (AfD) party has included a pledge to ban the niqab and burqa from any public place and in the administration in their program. AfD leader in the Bundestag Alice Weidel reminded Sputnik that she had repeatedly brought up this matter in parliament.

"This disguise cannot be reconciled with a European society of free individuals. The problem is that the CDU [Christian Democratic Union] of Mrs. [Chancellor Angela] Merkel is divided over it, so nothing has been done yet in Germany. But this situation will not last long," she said.

The topic of Islam in Belgium, where a deadly terrorist attack struck the capital on March 22, 2016, has long been acute. Contrary to what Imam Galaye N'Diaye of the Great Mosque of Brussels said at a parliamentary commission investigating the attack, students from the mosque have joined the ranks of the Islamic State (IS, a terrorist group outlawed in Russia). An example is a young woman who left for Syria in 2013 with her daughter, barely five years old, after marrying a Franco-Tunisian jihadist fighter via Skype. She considered Belgium a "country of disbelievers whom I hate and ask Allah to destroy." Before leaving for Syria, the young woman had followed the training, provided by a Moroccan preacher, at the great mosque. She had been fined in Brussels for carrying the niqab. The fine had been paid by the Islamic and Cultural Centre (CCIB).

"We knew that the Great Mosque, managed by Saudi Arabia [in particular, the Islamic World League], was at the heart of a system of financing of institutions that propagate Salafism, Wahhabism, which are versions ultra-rigorous forms of Islam, considering Westerners as kaffirs – disbelievers, obliging women to wear the niqab or forbidding them to see a male gynecologist. We have decided to stop the link between the great mosque and Saudi Arabia," George Dallemagne, a member of the Belgian federal parliament and member of the committee on the terrorist attacks, told Sputnik.

Nicola Tournay, the communications director of the Belgian People's Party (PP), warned about the rise of stricter religious attitudes not only among Muslims in Europe but also in secular Muslim-majority countries such as Turkey.

"It is true that very few women dare wear the niqab or burqa in most European countries, but in the UK, or in the USA, you see plenty of them in areas where there is a Muslim population. Countries such as Turkey, where the legacy of Ataturk had pushed back religious obscurantism, the niqab is back with a vengeance. In some areas of Istanbul, it is now the normal garb. This points to a rampant Islamization of Europe," she said, stressing that "populist" European parties such as the PP now found it relatively easy to satisfy their electorate at little cost by lobbying for things such as burqa bans.

In 2014 and 2017, the European Court of Human Rights (ECHR) upheld the French ban on face veils, ruling against Muslim women who wanted to wear the burqa "as a matter of religious freedom."

Sputnik has not received any answer to its calls to the Islamic World League offices or the Islamic and Cultural Centre of Brussels. Nobody is available to comment on this issue.

Young French writer Majid Oukacha, the author of "Face To Faith With Islam" and someone who has been critical of the religion of his Algerian father, spoke to Sputnik and said that European Muslims in favor of conservative religious rules often exaggerate the scale of "moral corruption," and make fallacies and incorrect assumptions when evaluating the merits of Western secularism.

"Too often, Muslims try to value Islam by pretending that Western culture is the synonym of depravity and humiliates Muslims. When in Europe, people who are feminists publicly deplore on the social networks that women with faces hidden by a burqa or veiled little girls can walk in the public space in France, I read reactions of Muslims who say in comparison: 'do you think it's better to have girls walking half-naked in the street?' Why should Muslims play the opposition of ‘our’ veiled women against ‘your’ undressed women? It is ridiculous to believe that without a veil, a woman automatically wants to walk half-naked. They should compare what is comparable: criticize the unveiled face, but nothing more. The technique of opposing the fabric hiding the face with buttocks in the air is very dishonest," Oukacha said, also stressing the issue of security that was of concern for European law enforcement when faced with face-covering clothes.

The face veil is, indeed, a security threat. It conceals the identity of the wearer, who could, for example, be a male. The full-length dress can also hide a belt of explosives, and this is a great fear among people in charge of security at airports. The fight against terrorism costs tens if not hundreds of billions of euros for the globe every year, and as such, there is little chance that these pieces of legislation will be reversed.