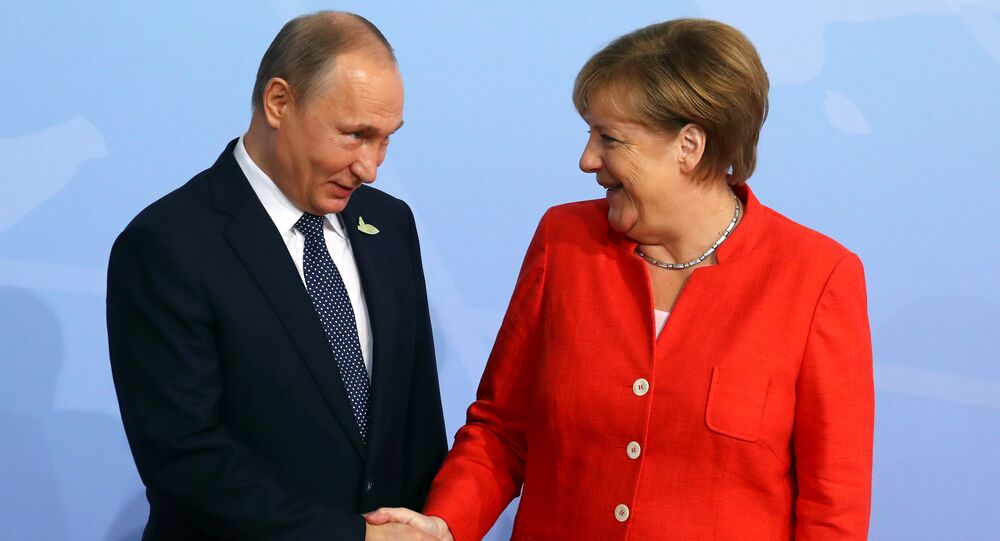 German Die Linke (The Left) and the Alternative for Germany (AfD) parties stand on the opposite views how the upcoming meeting of Russian President Vladimir Putin and German Chancellor Angela Merkel will help to eliminate tensions in relations between the two countries.

"Die Linke hopes that the meeting of President Putin with Mrs. Merkel will put an end to irritations and tensions between Russia and Germany [and] Russia and the European countries. Economic cooperation should be resumed in full. Especially in the field of energy cooperation, and, particularly, concerning the Nord Stream 2 project. The pipeline should be built without any geopolitically motivated restrictions," Alexander Neu, a German Die Linke (The Left) party member in the Bundestag, said.

However, Dr. Roland Hartwig, the vice-chairman of the Alternative for Germany (AfD) party's parliamentary group in the Bundestag, told Sputnik that the meeting will unlikely pave the way for normalization of bilateral relations.

"I do not expect any material results from the Merkel-Putin meeting on Saturday. Some minor agreements or understandings may be reached as an outcome enabling Mrs. Merkel to speak of a successful meeting, but no major breakthrough … I do not think that this meeting could pave the way for normalization of German-Russian ties", Dr. Hartwig said.

Putin and Merkel will meet in the German capital on Saturday. According to the Kremlin, the two parties are expected to discuss the situation in Ukraine, the Syrian conflict and economic pressure coming from the United States. On Saturday, ahead of the meeting with Merkel, Putin will visit the Austrian state of Styria to attend the wedding ceremony of the Austrian Foreign Minister Karin Kneissl.

Both lawmakers also commented on these plans, with Alexander Neu saying it was a political signal reflecting Moscow's willingness to engage in dialogue at all levels.

"Of course, the participation of President Putin in the wedding is also a political signal. And in the way that Moscow was always ready and willing to re-establish normal relations at all levels with European countries like Austria, who want to end the nonsensical sanctions regime. Berlin — the faster, the better — should enter into this offer by the Russian side," Neu indicated.

A similar view was expressed by Dr. Hartwig, who called it a symbol of normalization of relations with Austria.

"President Putin's attendance at the wedding of the Austrian foreign minister is a good symbol of normalization which is clearly not in Mrs. Merkel's interest. Therefore I would expect Mrs. Merkel to completely ignore that nice event," Dr. Hartwig added.

Prior to negotiations, which will be held in the afternoon, Putin and Merkel are expected to make a statement for journalists in Berlin, in which they will reveal the talks' agenda.

READ MORE: Merkel: 'I Was Right to Say That We Can't Rely Exclusively on US'

The views and opinions expressed by Alexander Neu are those of the speaker and do not necessarily reflect those of Sputnik.