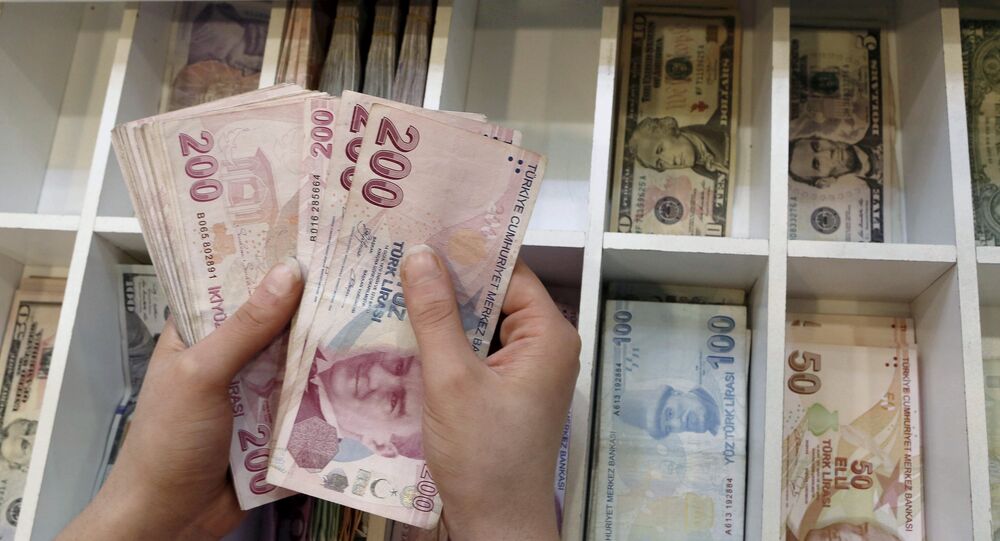 US President Donald Trump's love of using tariffs and sanctions to get back at foreign governments is a game changer that is ultimately destroying "the old world monetary order," economist Mark Frost told Sputnik.

US Treasury Secretary Steven Mnuchin revealed during a Thursday meeting at the White House that the US was prepared to slap Turkey with additional sanctions if Turkish President Recep Tayyip Erdogan refused to release American pastor Andrew Brunson. This would be in addition to the US' sanctions on two top officials in the Turkish Cabinet last week and tariffs imposed on Turkish steel and aluminum, which sent the Turkish lira on a bit of a tumble.

Turkey and the US landed in an "it's complicated" relationship status after Ankara refused to release Brunson, who is accused of backing the failed 2016 coup. Citing failing health, Turkish authorities have released Brunson from prison and placed him on house arrest.

​Frost told Sputnik Radio's Fault Lines on Thursday that Trump is changing the game on how officials view the power of tariffs and sanctions.

"[W]hether you like it or whether you don't like it, Trump has basically destroyed the old world monetary order of how the world works," he added.

Although the move was later condemned by the White House, Ankara did respond to the US by initiating its own tariffs on imports of American cars, alcohol and tobacco.

"The tariffs from Turkey are certainly regrettable and a step in the wrong direction," White House Press Secretary Sarah Huckabee Sanders told reporters Wednesday. "The tariffs that the United States placed on Turkey were out of national security interest. Theirs are out of retaliation."

But just because Turkey put out its own tariffs against the US, it doesn't mean that those tariffs are going to do much, according to the economist. "Turkey, unfortunately, found itself in a trade war with the United States, and it cannot win it. They can't even touch us; their best hit to us would be a pinprick," he said.

And just because Turkey landed in this situation because of its refusal to release Brunson, the country's troubles shouldn't be blamed on Trump, as Ankara had been for some time "skating on monetary thin ice," according to Frost.

"They have a history of inflating their currency. From a fiscal perspective, Trump had nothing to do with this," he stressed.

Late Thursday, Trump fired off on Twitter, bashing Turkey for taking "advantage of the United States for many years" and calling on Brunson to represent the US as "a great patriot hostage."