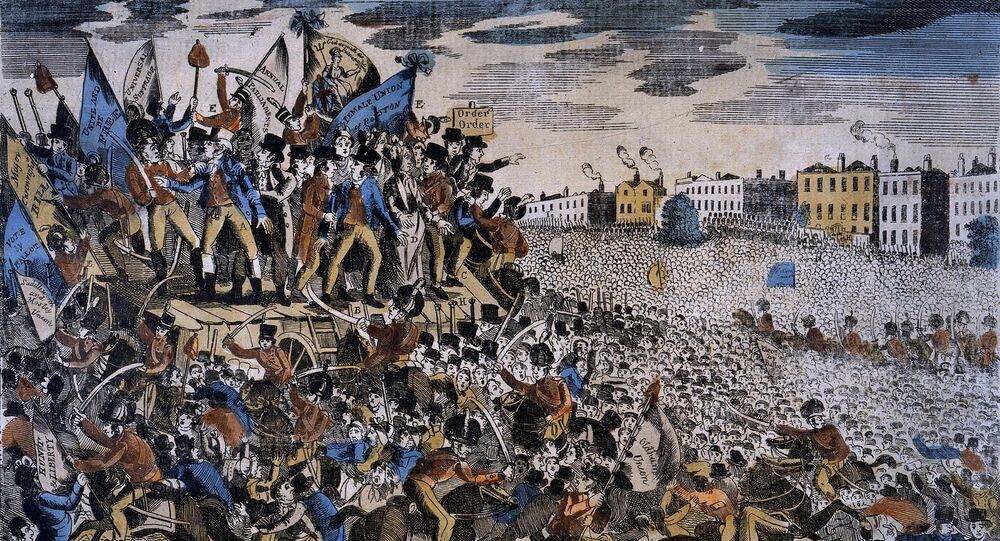 Nearly two centuries have passed since the Peterloo Massacre, the impact the event had on British society is undeniable. On August 16, 1819, a crowd of workers gathered to protest against poor working conditions but were charged down by the police in Manchester. 15 people were killed and 400–700 were injured.

The massacre was given the name Peterloo in an ironic comparison to the Battle of Waterloo, which had taken place four years earlier.

Sputnik spoke with author and historian Rob Hargreaves; who believed that although it was not initially successful in spurring on change, the Peterloo Massacre was a turning point in the history of the British working class.

Sputnik: How significant was the Peterloo Massacre historically?

Rob Hargreaves: People are saying that it was the birth of the Labour movement in the UK. It’s real place in history is that it was a milestone in the development in democracy in the country because it was one of the first occasions when ordinary working people, many of the workers in the cotton industry in Lancashire, got together in a peaceful manner to demonstrate a lack of civil rights, vote, very poor work conditions and that the powers at the time were largely ignoring their plight.

Many people think, however, that after Peterloo things got rapidly better and this is a myth that needs busting. It took a long time before universal suffrage and even longer until women got the vote, but it does mark a step in the right direction.

Sputnik: Does it deserve more recognition?

© AP Photo / Matt Dunham
New Research Exposes British Gov't Extensive History of Spying on Civil Servants
Rob Hargreaves: It certainly does. A lot of people said that it’s never been forgotten, but by and large in the last 100 years it has been relatively forgotten, probably because in that period there have been two World Wars, and many other great crises. History has got on with its own business.

There ought to be more remembrance. There isn’t much in the way of permanent memorials, there are a few plaques in the city of Manchester, but by and large, it’s not an event that most people will know about. They were very brave people, risked imprisonment and were persecuted, but were nevertheless willing to continue the fight and did eventually succeed over a long period of time, but nothing happened immediately.