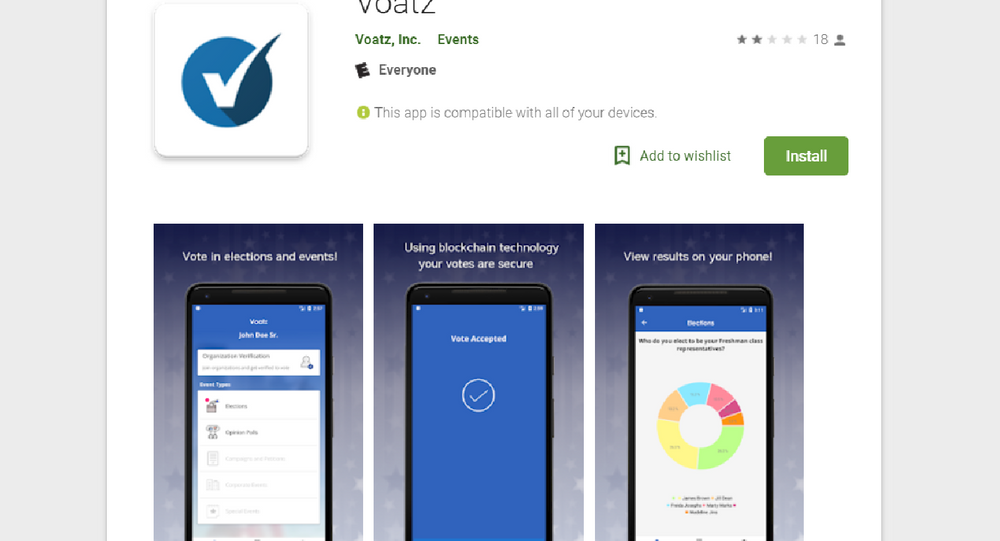 Smart Ballots: West Virginia to Privatize Your Vote with Voatz

Following two years of incessant brouhaha and botheration in the US over the issue of election integrity, the state of West Virginia is pushing forward nonetheless with a plan to allow voting via smartphone, entrusting a venture capital-funded startup to do it right.

"There's no doubt that we need to make access to voting easier and more accessible," web developer and technologist Chris Garaffa told Radio Sputnik's By Any Means Necessary. "But this particular program in West Virginia is not the way to do it."

The state did a trial run back in May during the midterm primary elections, allowing US troops abroad from two of the state's counties the option to vote from their mobile devices in place of sending absentee ballots. According to West Virginia Secretary of State Mac Warner, four audits were conducted on the program, and none yielded any faults.

But there are wider implications. "There's a number of issues with this," Garaffa said, first pointing to the fact that it's being handled by a private company, which has the cutesy name Voatz.

​"There's no accountability here, right?" the technologist noted. "They're a brand new startup, started this year, and they've got $2 million dollars in [venture capital] funding."

"There's gonna be no transparency," he added.

"Security researchers have been poking around and found so many vulnerabilities in their public facing systems," Garaffa said. "Stuff that does not inspire confidence. They just have old software running on their servers… they're not keeping their servers up to date."

"They tried out this voting system [at an internal Utah County Republican] meeting, and people — they had to go back to paper ballots, because the system just didn't work," Garaffa said. "And they have so many reviews on the app store about how awful it was."

Voatz has just 2.1 stars of five on the Google Play store for Android devices.

A one-star review states: "Not ready for large groups. Tried to implement this at both our local caucuses and county convention and the app crashed and burned both times. This might be great for small events but don't consider it for anything important unfortunately."

Another says "This is the second event we tried to use it. Both times absolutely failed and for the same reason. Amateur hour. The app also has an awful and confusing interface."

Meanwhile, there's "no sign they've updated any of their systems to make it any better," Garaffa said.

The Voatz app is planned to be allowed as a substitute for absentee ballots for US troops in the 2018 midterm elections in West Virginia.

As Midterms Approach, Will Government Serve the People or the Powerful?

Republican Victory in US Midterms Due to Voter Mobilization: Expert