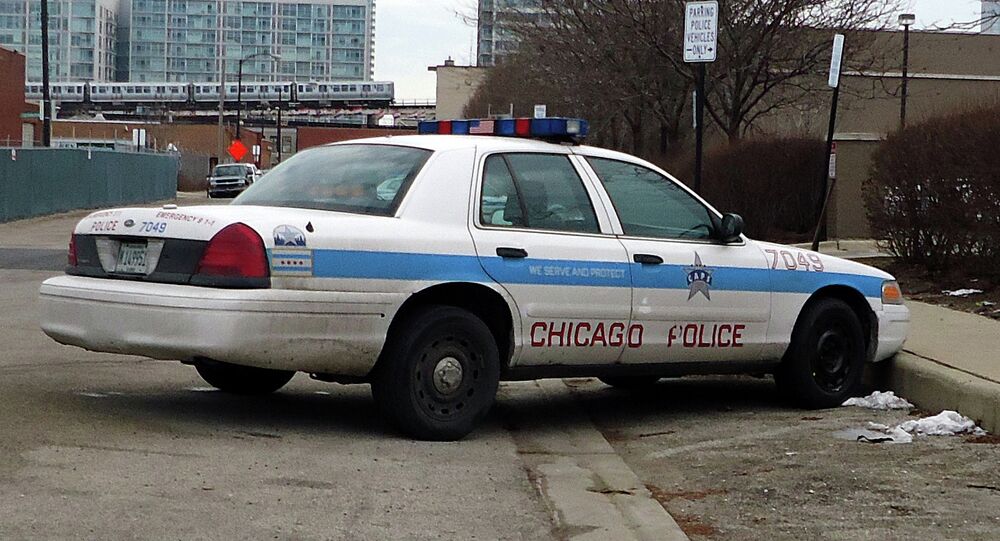 A partly-open van loaded with Nike Air Force 1 sneakers was left unattended in a series of predominantly black areas of Englewood, Chicago in the first week of August, leading to the arrests of several young citizens - activists claim the vehicle was a 'bait truck' parked by law enforcement for the purposes of entrapment.

While details remain unclear, videos posted on social media depict residents remonstrating with police, while blue lights flash and the truck lurks incongruously nearby — and one filmed by local criminologist Martin G. Johnson is said to show the vehicle at various sites over the course of several days. He speculates the locations chosen — which included basketball courts — were specifically chosen to trap local black youths.

Still, whether racially-motivated or not, the sting operation was perhaps inevitably going to ensnare a large number of arrestees, given the area's poverty rate is around 60 percent, and minor, financially-motivated crimes are commonplace.

Still, whether racially-motivated or not, the sting operation was perhaps inevitably going to ensnare a large number of arrestees, given the area's poverty rate is around 60 percent, and minor, financially-motivated crimes are commonplace.

Ironically, almost as commonplace in Englewood is the use of stings by law enforcement. For instance, in 2012 a ‘bait car' was left in the area with enticing items — including the keys — inside, in the hope someone would drive off with it, into a waiting cop ambush. Disappointingly for police — and producers of TV show Bait Car, which filmed the operation — thieves ended up simply stealing surveillance equipment left inside, making their escape before officers arrived.

Such ruses are frequently employed by law enforcement across the US, not merely with trucks and cars, but also bicycles and other modes of transport. Authorities have even left GPS-equipped ‘bait' boxes of luxury items unattended, in the hope criminals will snatch them and lead investigators straight to their front doors.

Nonetheless, while it has been officially claimed such operations keep recidivists off the streets, and assist in crime reduction overall, civil liberties campaigners have suggested these operations can in fact create crime where none would otherwise exist, and make convicted criminals out of individuals who are merely desperate, or opportunists, or both.

© Fotolia / Dominik Herz
Florida Policemen Launder $70 Mln in Notorious Sting Operation
Sting operations moreover occupy a fairly grey legal area, in that they are effectively indiscriminate — rather than specifically targeting someone who has or may have committed a crime, they target anyone who could commit a crime if the opportunity arose. In a 2015 Harvard Law Review article, Elizabeth E. Joh, law professor at the University of California Davis, said while stings often amount to "generalized ‘fishing'…there are no doctrinal bars to such open-ended traps. Police are not bound by probable cause or reasonable suspicion requirements before they engage".

This reality very much frames sting operations as entrapment — tricking someone into committing a crime in order to secure their prosecution. While that may seem an obvious and compelling legal argument for any victim of a sting operation, ever, US laws on entrapment oblige government inducement of a crime, and a defendant's lack of predisposition to engaging in criminal conduct, to both be proven  for such a defense to be valid.

The latter requirement is a major obstacle, upon which courts are overwhelmingly predisposed to finding against defendants — merely committing a crime under any circumstances is typically enough to demonstrate a predisposition to nefarious activity.

It's not the first time a controversial sting in the US has had a potentially significant racial element. In the late 1970s and early 1980s, the FBI ran an ongoing operation dubbed ‘ABSCAM' — immortalized in 2013 blockbuster American Hustle — in which agents posed as Arab sheikhs and sought to entrap politicians and other influential figures into accepting bribes in return for various political favors.  The plot was masterminded by convicted international con artist Melvin Weinberg, who avoided a three-year prison sentence and earned US$150,000 for his efforts.

© AP Photo / Louis Lanzano
Naughty Net Nannies: FBI Allegedly Distributed Child Porn in Darkweb Sting
Targets would be invited to lavish locations — including vast townhouses, yachts and hotel rooms — equipped with video recording equipment, to meet with the ‘sheikhs'. They were told the Arabs represented a company named ‘Abdul Enterprises', and wished to invest vast sums in the US — in return for facilitating the sheikhs' aspirations by sponsoring ‘private immigration bills' to allow Abdul Enterprises staff to enter the country, and signing off on building permits and licenses for projects such as casinos, they could receive significant sums of money.

More than 30 political figures were eventually investigated, including Congressmen, Senators, Mayors, city council members and federal agency representatives. In all, 12 were convicted, including six members of the US House of Representatives and one Senator.

While extremely successful, public disclosure of the operation's name — a portmanteau of ‘Arab' and ‘scam' — led to complaints from the American-Arab Relations Committee, prompting authorities to revise the contraction to ‘Abdul scam', after the name of the fictitious company used in the stings.

© AFP 2021 / Mandel Ngan
FBI ‘on Very Fine Line’ With Anti-Terror Sting Ops in Mosques - Muslims for Trump
Moreover, public, political and legal reaction to the operation was sharply divided, with even judges who convicted and/or upheld convictions of ‘stung' individuals criticizing the tactics employed by the FBI. The operation also led to the establishment of the Senate Select Committee to Study Undercover Activities, which concluded such undercover actions "create serious risks to citizens' property, privacy, and civil liberties, and may compromise law enforcement itself".

In The Dangers of Dissent, historian Ivan Greenberg suggests the FBI's investigation of political corruption under the auspices of ‘ABSCAM' may have been "payback" for significant public criticism the Bureau had received following Congressional investigations such as the Church Committee, which investigated widespread abuses of power by the US security services.

"The FBI wanted to punish the Congress for exposing its past corruption," he concludes.