A report by the New Delhi-based Observer Research Foundation says that the impeccable capacity of China’s launch vehicles puts it in direct competition with the West.

New Delhi (Sputnik) — According to the report, China is strategically capturing a major share of the international communications satellites market as part of a grand plan to benefit its own strategic interest as well as that of its allies. Experts say that the report is substantial considering recent developments.

READ MORE: China Seeking Both Economic and Military Dominance by Use of AI – Prof

"The China Great Wall Industry Corporation (CGWIC) is China's government entity authorized to negotiate and execute these (SatCom) contracts. This includes launching developing countries' government satellites in the Global South, such as Nigeria, Venezuela, Sri Lanka and Pakistan, some of whom have repeat orders in place. China has developed an ITAR-free (International Traffic in Arms Regulations) communications satellite bus known as Dong Fang Hong 4 (DFH-4) and uses its own launch vehicle Long March 3B (LM-3B) for executing these contracts," the ORF report released in India earlier this week reads.

© AP Photo /
China Launches Twin Satellites With Single Carrier Rocket - Reports
China takes a minimum of two months to complete in-orbit tests before handing over the satellite to a foreign government. These contracts involve building at least two ground stations as well as training technicians from the contracting countries. Bolivia took the longest time in taking over its satellite as the contract involved its technicians working alongside Chinese engineers for two years, the report adds.

The ORF report suggests that China intends to capture a majority share of the growing satellite communication market using its satellite manufacturing and launch capacity and this puts China in direct competition with western operators. 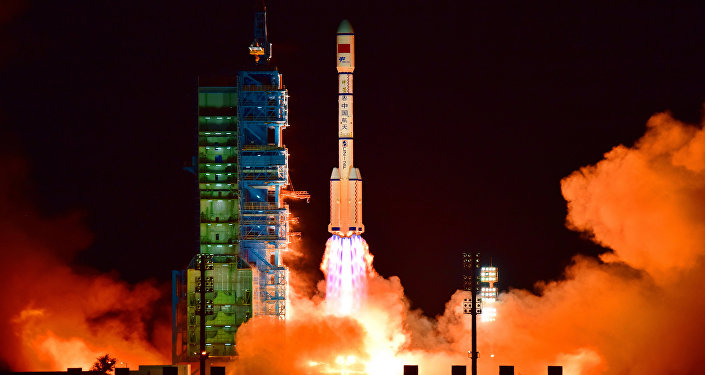 "Currently, ISRO and the West are way ahead, but given China's financial resources it could rise rapidly to challenge today's leading players. As a SatCom player China has the potential to make the benefits more affordable for its friends and partners," Shastri Ramachandran, a veteran journalist specializing in foreign affairs and former Senior Editor with the China Daily and the Global Times in Beijing told Sputnik.

Security analysts opine that the aggressive posture of the Chinese SatCom industry must not be seen as sheer business expansion of its tech industry.

"What China is doing is not just expansion of its satellite launch industry. It is investing in its geopolitical interests. The fact that China is focusing more on Latin American and African countries is testimony to its considered expansion plan of its clout in these countries which may not have the paying capacity for such technology, but China is investing on its own future interests," Ajay Lele, security and strategic affairs expert and senior fellow Institute for Defense Studies and Analyses told Sputnik.

Views and opinions expressed in this article are those of the Speakers and do not necessarily reflect those of Sputnik.