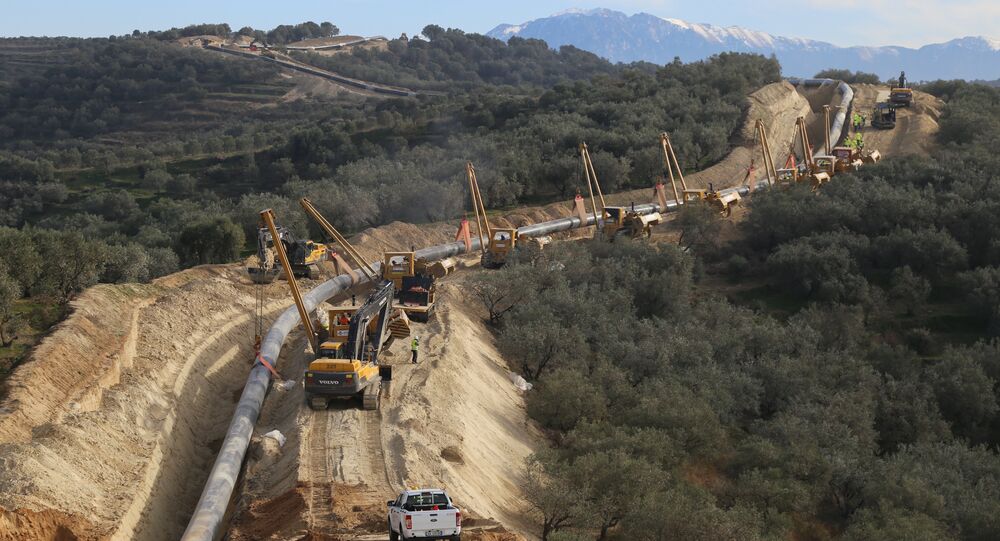 Donald Trump is pushing ahead with Washington's longstanding policy of thwarting Russia's energy supplies to Europe. Besides the effort to flood Europe with US liquefied natural gas (LNG), the US president has urged Rome to speed up the Trans-Adriatic Pipeline (TAP) project, Italian journalist Daniele Pozzati told Sputnik.

"The Trans-Adriatic Pipeline (TAP) project really is, like sanctions, a tool of that economic war on Russia that Donald Trump is either unwilling or unable to end," says Italian journalist and political observer Daniele Pozzati, commenting on the US president's remarks at a joint press conference with Italian Prime Minister Giuseppe Conte.

On July 30, Trump highlighted that he "would like to see a competing pipeline" in Europe to counter Russia's supplies, adding that the US is boosting its liquefied natural gas (LNG) shipments to the continent.

"The Trans-Adriatic pipeline, which would transport gas from Azerbaijan to Italy and Europe, was a geopolitical and anti-Russian project from the start," the journalist told Sputnik.

© Photo : Nord Stream 2
Trump's Wishful Thinking: Why EU is Unlikely to Become 'Massive Buyer of US LNG'
According to the Switzerland-based TAP AG, the pipeline is expected to bring Caspian natural gas to Europe: Starting at the border between Greece and Turkey, where it will be connected with the Trans Anatolian Pipeline (TANAP), the pipeline will cross Greece, Albania and the Adriatic Sea before terminating in southern Italy.

The project is part of the broader Southern Gas Corridor aimed at transporting gas from Central Asia to Western Europe.

Furthermore, Italian farmers and environmentalists are up in arms about the endeavor.

"It is true that the TAP would require the construction of a gas terminal in a historical olive grove in Apulia, southern Italy," Pozzati said. "And that it would jeopardize the pristine beach of San Foca, also in Apulia."

The political observer remarked that "the last thing the Conte government needs is to pick a fight with farmers protesting against the TAP pipeline."

On the other hand, "that Trump would try to add a 'competing pipeline' to the deal he has just struck with Conte is perplexing, especially as Trump has just met with President Putin," he noted.

Pozzati has drawn attention to the fact that Trump's TAP remarks were immediately preceded, and immediately followed by the phrase that "the sanctions on Russia will remain as is."

People march behind a banner "No Tap" against the Trans Adriatic Pipeline, during a demonstration on the second day of a G7 summit of Finance Ministers on May 13, 2017 in Bari

But what's about the Italian government vague remarks that anti-Russian sanctions have proven largely ineffective and need to be lifted? It was even expected that Rome could go even so far as to veto the extension of sanctions by Brussels.

"And vague, Rome's remarks were indeed," Pozzati responded. "But, apparently, they were enough to worry NATO and to induce Trump into making an offer Conte could not refuse."

© AP Photo / Jens Meyer
It Takes Guts: Nord Stream 2 Dilemma and Italy's Chance to Stop Russia Sanctions
The political observer suggested that the Italian government's Russian sanctions remarks could be used as mere bargaining chips in talks with the EU and US. "It is clear that it is unthinkable today to lift overnight those [anti-Russian] sanctions," Conte said on July 30.

"Rome's attitude towards sanctions has not changed, and it is the same as with the previous government: we don't like sanctions, we try to oppose them, but in the end, if pressured enough, we will have to get along with them," the journalist presumed.

Still, according to Pozzati, the words Conte said about Russia during the joint press conference with Trump deserve special attention.

"In my view, Conte's most revealing statement is this one: 'Italy is favorable to a dialogue with Russia, but Italy also considers that the dialogue between the United States and Russia is fundamental'. Let me translate from Conte to English: Italy would love to lift anti-Russian sanctions, but Italy now believes it is safer if we get the go-ahead from the US first," the journalist presumed.

It's "unthinkable" that the current Italian government would risk alienating Trump's friendship now that Rome's battles with Brussels are just about to begin," Pozzati pointed out.

The Italian journalist explained that Italian media and politicians are anticipating nothing short of a financial storm against Italy in September, 2018.

"The threat is very credible, if you consider that only a couple of months ago, on May 29, EU commissioner Gunther Ottinger said that 'the markets will teach Italians to vote for the right thing'. Meaning: austerity, immigration, gender mainstream, etc. True, the EU commission immediately distanced itself from such statement, and Ottinger himself was subsequently forced to apologize amid calls for him to resign," the political observer elaborated.

According to Pozzati, "the only hope the new Italian government has to survive is if it delivers on immigration control and the economy, for these affect every Italian citizen."

"Both require fighting a prolonged battle with the EU — a battle that, realistically, cannot be won without friends and allies," he concluded.