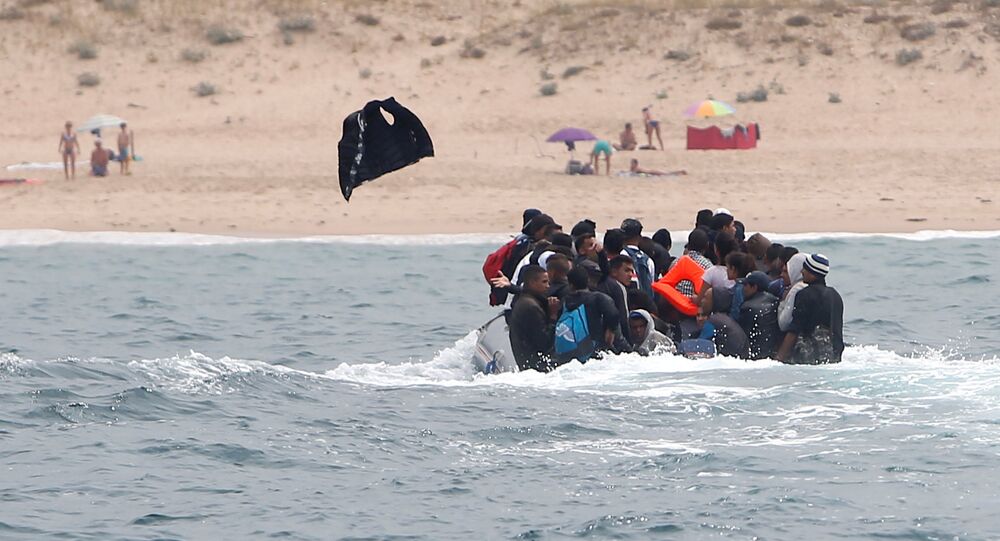 BRUSSELS, (Sputnik) - Spain's decision to let the Aquarius migrant rescue vessel dock at its ports amid tough stances taken by Italy and Malta has turned the country into a greater magnet for irregular migrants, a European Parliament member from Italy’s Lega Party, Mario Borghezio, told Sputnik on Wednesday.

"The story of the Aquarius played the role of a magnet for the illegal migrants. The human traffickers and illegals now prefer to try the shorter crossing to Spain," Borghezio said.

He also noted the great number of unaccompanied underage migrants sent to the country by their parents in the hope for their non-expulsion and consequent family reunification, which makes the situation around migration almost uncontrollable.

"There are also plenty of underage illegals, sent by their families alone. There were some 140 such youngsters on the Aquarius. If they reach Europe, they will never be expelled and the family back in Africa bets on the fact that family reunification will then be possible, which brings on average nearly five more people to Europe in the next two years. The situation becomes unmanageable because of the absence of decisions by the EU. The Spanish government is opening Pandora’s box. They will not be able to close it," Borghezio concluded.

Earlier in the day, the European Commission announced that it had received Spain’s request for assistance in tackling the increased migratory pressure and was working to swiftly disburse relevant funds.

In mid-June, Italy and Malta categorically refused to accept over 600 migrants stranded on the Aquarius rescue vessel. Spain ultimately lets the migrants from the rescue vessel disembark in Barcelona.

© AP Photo / Carmelo Imbesi
Salvini Rebuts Reports Italian Ship Illegally Returned Rescued Migrants to Libya
According to the International Organization for Migration, 22,858 migrants arrived in Spain since the beginning of the year through July 29, which is 16,345 more than in the same period in 2017. Spain currently tops the list of Mediterranean countries by the number of migrant sea arrivals.

Italy is also one of the main entry points for migrants arriving in Europe, yet its new government has taken a tough stance on the issue, turning away ships carrying undocumented migrants.

The views and opinions expressed by Mario Borghezio are those of the speaker and do not necessarily reflect those of Sputnik.