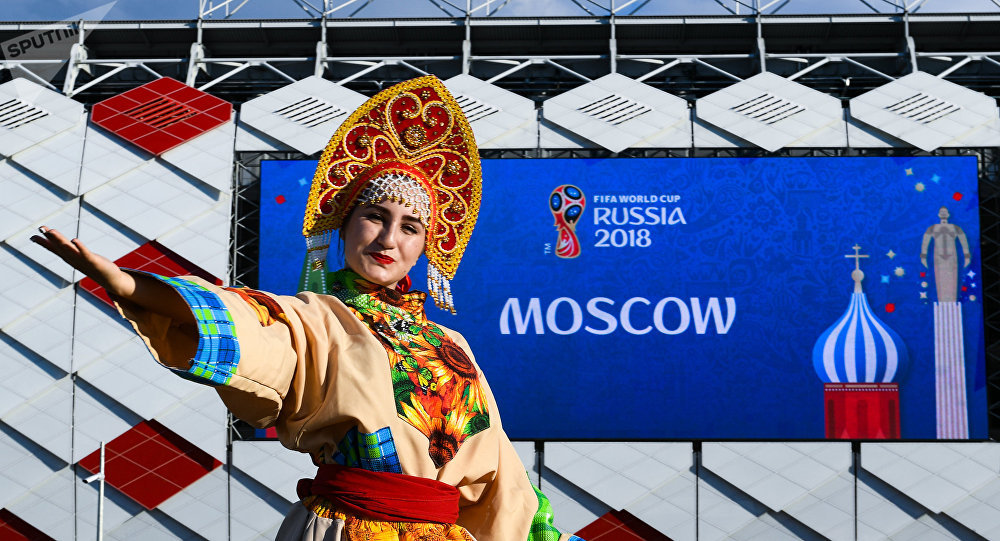 With the World Cup wrapping up two weeks ago in Russia the event has raised the question of increasing tourism to Russia. Marina Litvinova, editor of RADrussia.com, a newly initiated Russian tourist website, recognized the opportunity to inform and educate the huge global audience about the country's tourism opportunities.

Sputnik: What are your thoughts about the FIFA World Cup, massive success in the staging of the tournament here, probably beyond anyone's expectations really, absolutely super tournament, the way it was perceived and embraced by the tourists and the World Cup fans who came to Russia. What's your general comment and feedback now that it's finished?

Marina Litvinova: I would say it was not a surprise to me, I did expect such a boom of positive feedback, I did expect that everybody who travelled to the World Cup would be absolutely blown away during their time in Russia. It did surprise a lot of people, probably a lot of the locals, but one of my friends just sent me a message, saying, you were telling us this a year ago when you arrived, because I'd just moved back to Moscow a year ago from Dubai, and this is all I've been saying: that this event is going to turn things around; we have to prepare, we have to get ready, that this is totally going to be a game changer. I'm not surprised, I'm very happy actually that the World Cup happened here in Russia and that it gave so many people who never considered Russia as a tourist destination the chance to see it and to discover it for the first time.

© Flickr / Micah Camara
Turkish Hotel Bans Russian Tourist From Posting Bikini Snaps (PHOTOS)
Sputnik: That leads us to the question what your motivation was to initiate your website, just explain to us how your first ideas came about, what the inspiration was, what the motivation was? Obviously it's on the back of you having so much positivity within yourself, and you wanted to embrace this situation, you also mentioned the gaps in the market place in terms of educating, advising people, and in the English language as well.

Marina Litvinova: I've traveled a lot and I've lived abroad for quite some time. I lived almost 10 years in Dubai and I've travelled extensively everywhere, and what I was noticing is every time I go somewhere I obviously have a great time, but every time I come to Moscow I manage to have a way better time than wherever I've just been. It is because I'm local and I know my way around, and I know exactly what to do here and where to find anything that's interesting to me, basically I can take care of myself in Moscow and have an amazing time… I've always found it really hard to explain to people who have never been to Russia why and how I'm having such an amazing time, that Moscow is a great city, that Saint-Petersburg is a great city and just to educate them about the country.

I can give you an example: at my corporate job in Mars, one of my managers was a senior executive, very well-traveled and well-educated, he was originally from Egypt, but he's also lived in many countries of the world. We once had a conversation where I mentioned the Moscow metro and that it's state-of-the-art architecturally, almost a museum, and it turns out that he never knew, and I just started showing him pictures online and he was completely blown away. He was probably closer to his 50's and it's something he had never heard about, just because. Because how many things have we never heard about different countries? These bits and pieces made me realize how little people know about foreign cultures and foreign countries unless we bring it to them ourselves, nobody really sits down and Googles what's cool to do in Russia unless they're planning to come here and many of them are not planning to come here, so they never find out. So it's a vicious circle that needs to be broken, somewhere.

So I moved back to Moscow a year ago. Back then, my friends from Dubai started asking me about Moscow, about Russia, and what would I advise them to do when they travel here for the World Cup. I've done some research online and I realized I don't have a link to send them, anywhere. I don't have link to a site that's going to be interesting to my friends. They would not want to go and explore the Golden Ring, unfortunately. They would not really want to spend all day, every day at museums. […] This is what Russia is known for, it's famous for the culture and the history, however there's simply a huge gap the lifestyle: what do, where to go, where to eat, where to hang out, where to listen to music. All of the different interests that people have, they are not covered with any information in English for the foreigners to be able to discover and to understand that if they're not very much into history or culture, there are still many things for them to do here. So when I realized I don't have anything to show to my friends, I decided to scratch my own itch, and I decided to start a blog… but then I told this idea to one of my business partners… and he supported me and he said it's a very interesting insight and he would be interested in partnering up and scaling it up to a more serious online resource than just a little blog of mine that I would've had otherwise.

© AFP 2019 / KIRILL KUDRYAVTSEV
Russia, China Foremost on India's Tourism Radar
Sputnik: After the World Cup ended, you co-edited an analysis of 5,000 social media users and their thoughts, their feelings, their experience, and the photographs that they'd taken. It's a very thorough analysis of what their perception was and what they were saying. It went viral and was shared throughout the whole of the world and was a big statement, a unison of noise saying that Russia is a fantastic country, that Russia is wonderful, the food's interesting, the people are very entertaining, very forthcoming, sharing and very helpful and we really like Russia and we want to tell people and to possibly come back. Regrading the analysis of peoples' reactions during the World Cup, I would say it's one of the most thorough analyses of peoples feelings towards Russia that many people have probably would've ever read, you mentioned a very interesting aspect of the dynamics of the competition, about the fans showing Russian people how to enjoy and appreciate their own environment, their own city, their own country. What did you actually mean by that, can you explain your thoughts and feelings?

Marina Litvinova: I think we get used to things and we start taking them for granted. We live in a beautiful city and we imagine that this is the norm, that everybody lives like that. When you imagine that this is the norm, your standards are already so high that you start picking on the smaller things that might not be working; this could be better and that could be better. The biggest supporters of my project and my web site and my vision are actually Russian people who live abroad. They know this is not the norm, that so many things that we take for granted here, they can't get access to wherever they're living, and I'm talking Dubai, I'm talking New York, I'm taking Geneva, I'm talking London, I'm taking big capitals of the world that are out there. One of my editors, who's working with me, she lives in Berlin, another friend she contributes to our project for free, she's a volunteer, she's a friend of mine, but she's very passionate about it as well, she lives in Belgium, she used to live in Moscow before. I just got a call this week form an acquaintance of mine in Miami and she told be she took a sabbatical and she came to Moscow for the summer and she wants to meet and chat, so I get so much support from the Russians who have moved and they do realize that this is not the norm. And I also get a lot of support from the foreigners who are expats who live in Moscow and they also realize that this is not the norm. They've lived everywhere, moved around, and then they come and they find that Moscow is amazing.