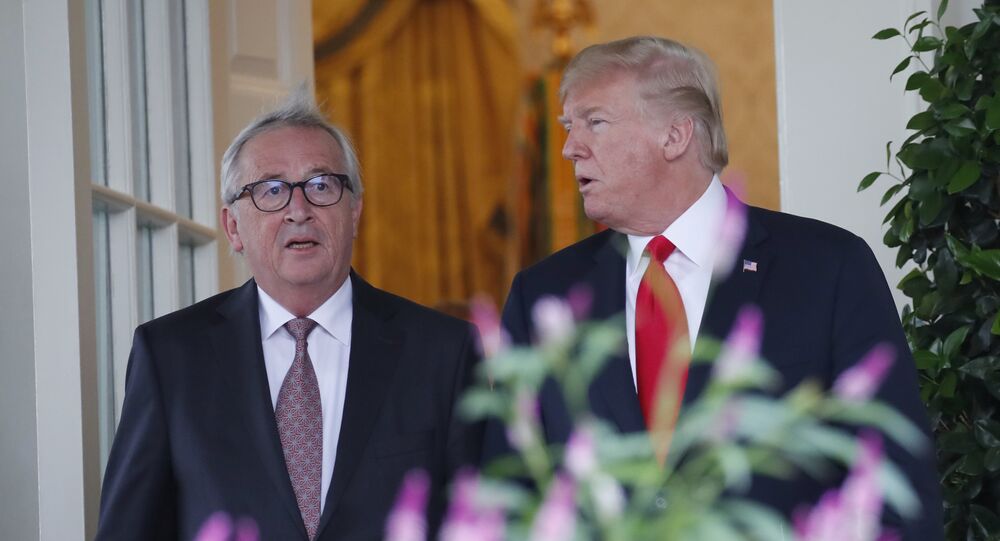 An unexpected compromise was announced Wednesday afternoon by US President Donald Trump and EU Commission President Jean-Claude Juncker, assuaging fears of a trade war between the US and European Union. However, that agreement is mostly for show, an economist told Sputnik News, and its promises mostly tactical.

"We met today in Washington, DC, to launch a new phase in the relationship between the United States and the European Union — a phase of close friendship, of strong trade relations in which both of us will win, of working better together for global security and prosperity, and of fighting jointly against terrorism," begins the joint statement by Juncker and Trump, delivered at an unscheduled presser.

© REUTERS / Kevin Lamarque
Juncker at Talks With Trump: EU, US Are 'Close Partners, Not Enemies'

The statement listed five agreements, including "work together toward zero tariffs, zero non-tariff barriers, and zero subsidies on non-auto industrial goods"; importing by the EU of more liquified natural gas (LNG) from the US; launching "a close dialogue on standards in order to ease trade, reduce bureaucratic obstacles, and slash costs"; and working "closely together with like-minded partners to reform the WTO and to address unfair trading practices." It further noted that the two parties "want to resolve the steel and aluminum tariff issues and retaliatory tariffs."

Trump dubbed the agreement, which comes at the end of months of vicious sparring between the US and EU, as a "big day for free and fair trade," Politico reported.

However, critics were quick to jump on the declaration's ambiguity. "Instead of a firm commitment, what we really got was big language of striking collaboration and entering into dialogue," Marianne Schneider-Petsinger, a US geoeconomics fellow at Chatham House, told The Atlantic Thursday. "This, combined with Trump's history of backtracking, might mean that there might be a couple of more surprises as things develop over the next couple of months."

Radio Sputnik's Loud & Clear spoke with Richard Wolff, a professor of economics emeritus, University of Massachusetts, Amherst, and founder of the organization Democracy at Work, to get to the bottom of the surprise concord.

​Wolff agreed with Schneider-Petsinger's appraisal of the event, also saying that it was mostly a "face-saving operation" directed at the media and the two men's supporters.

"European and American negotiators have, at least for the last 40 years, periodically gotten together and committed themselves to eliminating tariffs and other manipulations of trading relationships between them," the economist told hosts John Kiriakou and Brian Becker.

"It has meant nothing in the past, and there is no reason to believe it means any more today than it has all the other times [that it's been] done."

"Mr. Trump said that the Europeans promised to buy massive amounts of soybeans. They're not gonna do that for a whole host of reasons, not the least of which is, they don't use soybeans the way the Chinese did, and the problem for American farmers is that Mr. Trump's tariffs have been retaliated [against] by the Chinese. So [the Chinese are] not gonna buy the soybeans, and they buy more soybeans than the Europeans ever did, and therefore this whole thing is a fakery."

Accordingly, China's 25 percent tariff on soybean imports from the US that began on July 6 hit Uncle Sam pretty hard.

How a crop used in hog rations and cooking oil got caught up in a huge trade war https://t.co/kb0N80z9x0 pic.twitter.com/fNR2QnGCcm

​"But it is a nice way to say to the soybean farmers who have been yelling bloody murder at Mr. Trump because of what he's doing, having voted for him, this is a way for him to look like he's at least for the time being taking their concerns seriously and doing at least something," Wolff said.

"But it is, again, 90 percent show, 10 percent anything real, and it will not solve the problem of the soybean farmers of America, and within a short matter of weeks and months they will see that."

"However, the Europeans have long-term contracts with the Russians," the economist noted. "The Russian natural gas is cheaper and closer than is the American, and so there again, the overwhelming likelihood is that we will look back on these statements by Mr. Trump with the same bemused amazement at how he can say one thing and do another that we greet most of what the man says in the last two years."

​The professor noted that Trump has probably taken such a firm stance against Russian-produced LNG, particularly in his vitriol directed against the Nord Stream II pipeline, in an effort to "show in some manner that he's going after Russia very intensely" after his much-criticized Helsinki meeting with Russian President Vladimir Putin. However, he noted, that's always been Trump's approach economically since he became president.

However, Juncker got one thing he really wanted: "He got the commitment of the president not to impose tariffs on automobiles coming to the United States from Europe," Wolff said.

That's been a major bone of contention for the last two months, with Trump threatening in a June tweet, "if these Tariffs and Barriers are not soon broken down and removed, we will be placing a 20% Tariff on all of their cars coming into the U.S. Build them here!"

"That is something the Europeans are very concerned about," Wolff noted, "particularly the Germans, who are the major players in this regard, and so they actually got a commitment — how firm, we'll see — but they actually got something that matters a lot to them, whereas the rest of it is, to be kind and polite, mostly verbiage, but nothing much beyond that."

Sputnik News analyst Walter Smolarek chimed in on the conversation at this point, noting that the real purpose of this agreement is to give Trump a freer hand to "wage a more effective trade war against China, which is still very much on and could intensify in the coming weeks and months."

Wolff noted that there are many ways to manipulate trade, with tariffs being only one tool. The French, for example, have announced they won't allow any American imports because they have rules about GMO-altered crops, rules about protecting their own agriculture and rules about health and safety that American products do not meet.

Almost everything a government does affects trade, "so if you're really going to get rid of barriers to trade… you're talking about countries interfering in one another's basic organization of what they do, and they have been very loathe to let anything like that happen. And again, the Europeans, looking at Mr. Trump, above all, the idea that he would have some kind of ongoing say about what they do and don't do," he laughed.

The EU itself has tripped over similar hurdles before. In the 1960s, conflict between the Benelux nations and the sharply nationalist French President Charles de Gaulle over supranational European Economic Community projects like the Common Agricultural Policy led to the so-called "Empty Chair Crisis" of 1965, in which French diplomats were withdrawn from their EEC positions in protest. They only returned when the dispute was solved to de Gaulle's satisfaction and France was given veto power over decisions it believed would affect its national interests.