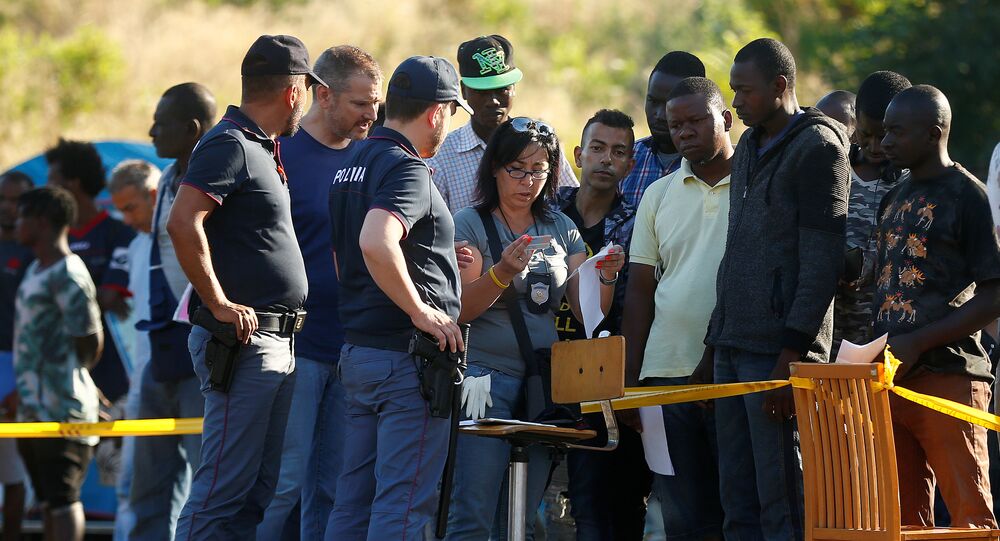 The European Commission has offered to pay countries €6,000 per person to host migrants in secure centres in their territory. The offer seeks to engage more governments to help ease Italy's burden. Radio Sputnik discussed the European Commission’s offer with Alessandra Venturini, professor of political economy at the University of Turin.

Sputnik: Does the European Commission’s offer come as a surprise to you?

Alessandra Venturini: Surprising is the reaction of our minister of interior because Italy needs the EU commission, Italy, which is a south European country, is more exposed to the first arrival of migrants by boat through the Mediterranean, they need a unifying package from the commission, not just money.

As probably everybody knows, the problem is in redistributing the migrants around Europe, so it’s not the amount of money which is the point of the debate, the point is that it is not enough to pay a country because they protect and save the lives of people that cross the Mediterranean.

Sputnik: Now in your view what is Brussels trying to achieve here?

Alessandra Venturini: The money is not enough to cover the costs probably of hosting migrants, but the problem is that Italy cannot host all the migrants that want to become asylum seekers in Europe. They should be redistributed around the European countries. That is the main issue.

© AFP 2021 / STRINGER
EU Countries Could Be Offered €6,000 ($7,000) for Each Migrant They Keep in 'Controlled Centers' - Reports
Until one of the other European countries accepts a proportionate amount of refugees, Italy is trying to react to this approach. So it is not only the burden that we had, but it’s also the position of Italy being in the Mediterranean, which means to be protected, but at the same time they need to be reinforced: control of the frontier but the main issue is their distribution. We are the harbor of Europe, not of Italy. Lampedusa is the harbor of Europe, not of Italy.

Alessandra Venturini: The previous government was already working towards containing the pressure, to try to solve the migration problem from the beginning, the root cause of this. But the path was not completed, you can try to close what is usually called the backdoor, the people arriving by boat through the Mediterranean, but you should open the front door. You should be able to resettle asylum seekers directly from the country of war and fight, that is, Syria, Ethiopia, Sudan and so on – directly. And also open the door to … The countries close the front door so they have too many people arriving from the backdoor.

© AFP 2021 / Gabriel Bouys
'They Include Terrorists, Criminals': Libya Says No to Taking in Migrants Rejected by EU
So the trend now is very tricky, very difficult. We try to close the backdoor, but in the meantime we have not opened enough the front door.

Sputnik: So far no countries have offered to host these control centers for refugees while chances of a non-EU state hosting are also said to be very low. There were only a couple of African countries, Morocco was one of them, that have basically stated that they would not allow that facilitation to be hosted in their country. How likely is the EU to work out a solution?

Alessandra Venturini: The point is that a lot of these people that try to arrive to Europe are not real asylum seekers. They are people in search of a future, a better life than the one that they had. We had to open the front door to close the backdoor. Let us organize as was in the 60’s in the country of origin offices that hire people that want to come.

Instead of having them coming after legalizing them for legal migrant, for asylum seekers [we should] implement the work of the high commission for refugees, improve their work and make them more efficient. Why do a lot of people arrive by boat? The high commission for refugees was able to resettle last year only 100,000 people and more than half of these in the US and Canada, instead of Europe and the others arrived by boat.

So let us try and implement the front door more. In this way you discourage people from crossing the Mediterranean alone because they know that they can arrive through the front door.

The views and opinions expressed by Alessandra Venturini are those of the speaker and do not necessarily reflect those of Sputnik.