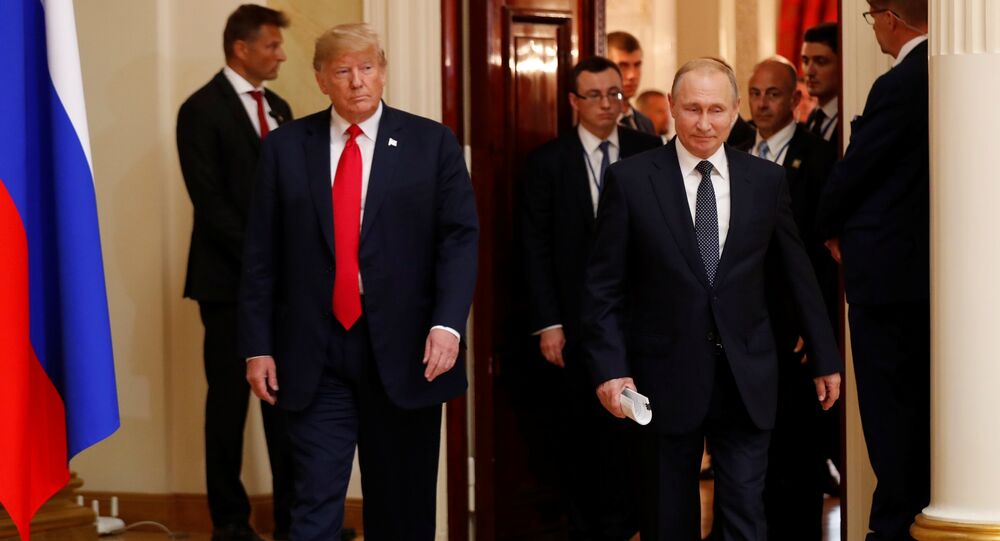 The American political discourse is becoming increasingly provocative, indicating that various political factions in Washington are more concerned about their own position rather than the country's national interests, Eric Kraus, an independent political risk analyst, told Sputnik.

"The United States is currently involved in a low-intensity civil war," Eric Kraus, an independent political risk analyst, opined, commenting on US mainstream media hysteria over the Helsinki meeting between Russian President Putin and his American counterpart Donald Trump.

"By this I mean that the various factions (the Democratic Party old-guard, the Republican traditionalists, the Trump faction, the military-industrial-media complex) are far more concerned to score points against each other than to advance the overall interests of the United States," the analyst told Sputnik.

On July 16, Trump and Putin met in Finland's capital, prompting a storm of criticism from the left-leaning US MSM. To add to the discontent of his opponents, the US president downplayed the alleged "Russian meddling" in the US 2016 presidential election and invited Vladimir Putin to the White House this fall.

​"Donald Trump's press conference performance in Helsinki rises to and exceeds the threshold of "high crimes and misdemeanors." It was nothing short of treasonous. Not only were Trump's comments imbecilic, he is wholly in the pocket of Putin. Republican Patriots: Where are you???" former CIA Director John Brennan tweeted on July 16.

"If this is not treason, then what is it?" one of The Washington Post's headlines asked.

"Trump is doubling down," Kraus said. "There is no middle-ground in the current American political scene. The Finland summit is perceived as, depending upon which faction one belongs to, either an abject and treasonous failure or a great step forward towards rational diplomacy based on win-win diplomacy. It is hard to get any clarity since the corporate media have been totally instrumentalized by the anti-Trump faction and are completely and openly partisan."

© REUTERS / Kevin Lamarque
Trump Came Under 'Coordinated Assault' After Helsinki - Wall Street Analyst
The political risk analyst opined that judging from the mainstream American press, the White House is "about to be stormed by the revolutionary masses."

However, according to Kraus, this vision — mostly promoted by Democrats — has nothing to do with reality as "the overwhelming majority of Republicans do not cite Russia as a major threat, and a substantial majority supports Trump's Russia policy."

"Trump, as usual, is playing to his base, assuming that the Democrats will succeed in demotivating their own voters without any need of his assistance," he noted.

While Trump has been subjected to harsh criticism over the Helsinki talks, his predecessors, Barack Obama and George W. Bush, have never been criticized or accused of "treason" for meeting with the Russian president or improving ties with Moscow. In June 2003, The Telegraph openly endorsed a public reconciliation between Bush and Putin after a short chill over the US Iraq invasion, while in 2009 Western mass media was vocally enthusiastic about the Obama-promoted "Russian reset."

"For the US President to speak with a geopolitical competitor/adversary is described as 'treasonous' despite the fact that every previous US president of the post-war period at some point in his presidency engaged in discussions with Russia, and since [Richard] Nixon, with China — once portrayed as the most demonic of American adversaries," Kraus noted.

© REUTERS / Kevin Lamarque
Trump Downplays "Russian Meddling", Throws FBI Prowess Into Question - Analyst
Commenting on what appears to be a paradoxical situation, he explained that "any success by Trump is automatically considered a loss by the Democratic Party, and this is amplified by their tame liberal media."

Having warned against taking such hysteria "terribly seriously," the analyst admitted that "the discourse is becoming increasingly wild and provocative."

"This is characteristic of the early phases of civil conflict — that this evolves into actual violence seems unlikely, but it remains to be seen," he presumed. "Again, the domestic political situation has deteriorated to the point where all factions seek to score points against each other, totally oblivious to the national interest."

US Lawmakers Demand Hearing Into Putin's Alleged 'Manipulation' of Trump