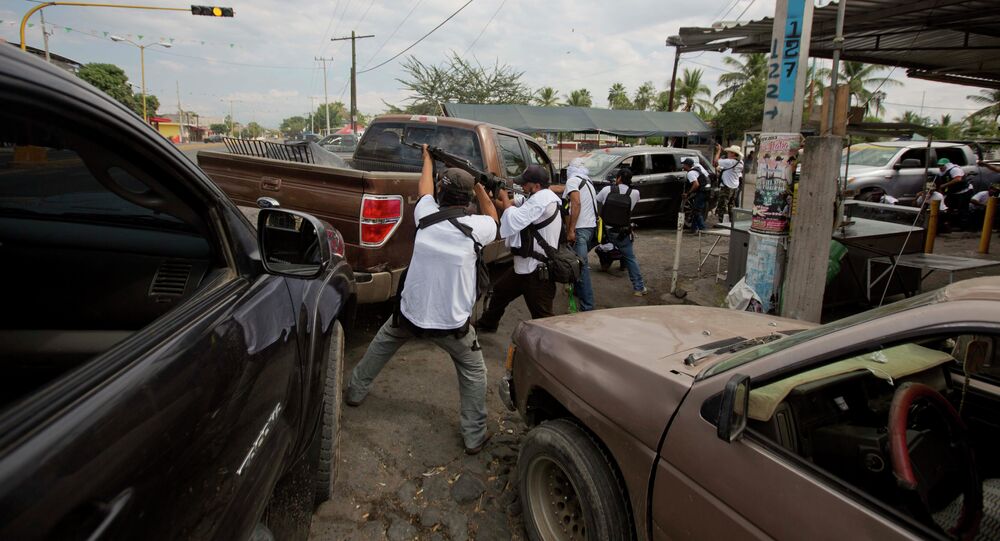 'The Cartels Keep Getting Stronger': Will AMLO Succeed Where Others Have Failed?

Earlier this month Mexicans elected a new president, Andres Manuel Lopez Obrador, a left-wing maverick known as AMLO. Sputnik spoke to Luis Horacio Najera, a Mexican journalist who was forced to flee to Canada, about whether AMLO would have more success against the Mexican drug cartels than his predecessors.

Andres Manuel Lopez Obrador will take over from the much derided Enrique Peña Nieto as President of Mexico in December.

Luis Horacio Najera, a Mexican journalist who was forced to flee the country after being targeted by a drugs cartel, said he was skeptical about AMLO's campaign promises.

"His proposals on public safety are vague, without specifics and most importantly lots of the members of his cabinet are people with either a strong history as politicians from the PRI who left the party to join AMLO, or some members of the left that have ghosts inside their closets," Mr. Najera told Sputnik.

He said Mr. Najera had offered a "magic formula" as a way of tackling corruption.

"To successfully change that is going to take years and jails to judge and sentence thousands of corrupt public servants. A major issue is that they have fed with generosity the monster of corruption, so I don't think criminal organizations would make the life of the government easier when tackling corruption effectively….Sadly the main body of police officers in Mexico are corrupt or they don't have the incentives nor the tools for their job. Until that happens sadly the army is the most effective enforcer against organized crime," Mr. Najera told Sputnik.

When Mr. Peña Nieto — the PRI (Institutional Revolutionary Party) candidate — was elected in 2012 he promised to change his predecessor Felipe Calderon's aggressive strategy against the cartels which had failed to defeat them and had just led to an upturn in violence.

In 2014 Mr. Peña Nieto created a National Gendarmerie with 5,000 officers, who were designed to tackle the cartels and be immune to corruption.

But the cartels have gone from strength to strength and Mr. Peña Nieto will limp out of office with one of the lowest approval ratings in Mexican political history.

Mr. Najera says "successive Mexican governments have claimed they would defeat the cartels."

AMLO tells Trump that he plans to make Mexico a land of opportunity with plenty of jobs like in the USA. This will make it so their people wont have to leave their homeland for a better future. All leaders should learn from our #POTUS and make their countries great again!

"But they seem to keep getting stronger. Why? There are several causes for that. One is the continuous demand for drugs in the US, Canada and Europe. Slowly but constantly, Mexican criminal organizations have been overtaking the control of the market overseas, thus creating the need for more employees. This expansion leads to the second cause which is rampant corruption among law enforcement agencies and the armed forces in Mexico," Mr. Najera told Sputnik.

Mr, Najera, who was a senior correspondent for one of Mexico's most influential newspapers Reforma, fled to Canada from the city of Ciudad Juarez, on the US border, in September 2008 after he was threatened by the local drugs cartel.

"I specialized on reporting transnational organized crime issues on both sides of the US-Mexico border. I received death threats and found my name was on a ‘hit list' of journalists to be killed by the local cartel. A reliable source within the federal police also warned me about threats against me from corrupt members of the military deployed at the border," Mr. Najera told Sputnik.

Twelve of his colleagues at Reforma, including several close friends, have been assassinated in Mexico as a result of their work.

Top of AMLO's campaign agenda was targeting corruption and, although he did not specifically mention the drug cartels, it is well known that money from narcotics has oiled many politicians' machines and discouraged them from targeting the drug barons.

Mr. Najera said Mexico was not yet a "narco-state" but was a strong influence from criminal groups at the state and municipal level.

"After 2000 — when Vicente Fox won the presidency after 71 years of uncontested governments from the PRI — the effect was that in absence of the 'king' or the president, governors became 'feudal lords' that concentrated power and control that in some cases was facilitated by gigantic investments from criminal organizations operating in the area. But there is hope for Mexico. It would take a long and bloody process to fix it but it could happen," Mr. Najera told Sputnik.