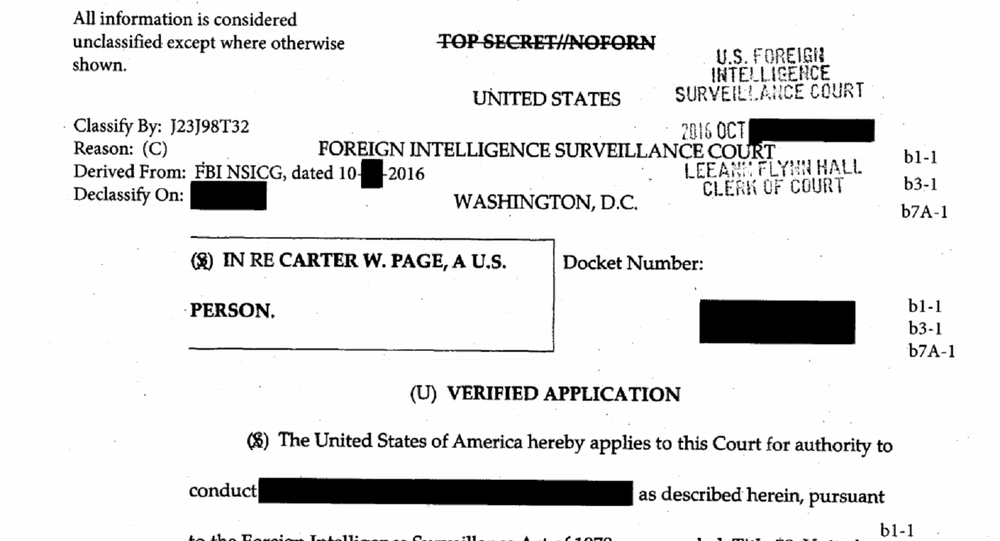 On Saturday, the US Department of Justice (DOJ) released documents detailing the surveillance order against one-time Trump presidential campaign adviser Carter Page. Carter Page has not been indicted in the ongoing Mueller probe into alleged collusion between US President Donald Trump’s team and Russia.

The FBI believed Carter Page was in contact with officials of the Russian government and may have been acting on their behalf, an argument which enabled the bureau to secure a warrant to surveil him through the United States Foreign Intelligence Surveillance (FISA) Court. Page, a volunteer for the campaign, had his phone tapped as a result.

"What you're really seeing here is the whole… FISA court itself, what a rubber stamp it is. It's easier to get a warrant from a FISA court than it is even to get an indictment, which you can get for a ham sandwich from a prosecutor," Kavanagh told Loud & Clear hosts John Kiriakou and Brian Becker. "So really it's very thin gruel. The only evidence they have against him, that I could see, that wasn't blacked out, was the Steele dossier and news reports."

​The Steele dossier was funded indirectly by the campaign of Trump's Democratic rival, former US Secretary of State Hillary Clinton, and contained numerous unsubstantiated allegations, including the assertion that the Kremlin had "kompromat" (compromising material) on Trump, such as an account of him hiring Russian sex workers to urinate on a bed in a Moscow hotel room previously rented by former US President Barack Obama.

The FISA warrant was obtained despite the fact that the former lead investigator on the FBI's Russia case — Peter Strzok — didn't believe there was anything "big" going on between Trump's campaign and Russia. On Thursday it was revealed that that the FBI's special counsel to the deputy director Lisa Page (no relation to Carter Page) confirmed behind closed doors that Strzok's text message to her that read "There's no big there there" referred to the Russia probe.

Lisa Page and Strzok exchanged thousands of text messages while they were having an affair, including ones detailing a discussion in former FBI Deputy Director Andrew McCabe's office about taking out an "insurance" policy against a Trump presidency. On another occasion, Strzok promised Lisa Page, "We'll stop [Trump]" from becoming president.

Becker pointed to a telling portion of the FISA application: "A July 2016 article in [The New York Times] reported that [Trump's] campaign worked behind the scenes to make sure [the Republican Party] would not call for giving weapons to Ukraine to fight Russian and rebel forces, contradicting the view of almost all [Republican Party] foreign policy leaders in Washington."

"Just for our audience to remember, [Trump's position on arming Ukraine] would be exactly the same position as Barack Obama: don't send heavy weapons to Ukraine, because that will actually accelerate the conflict in the eastern part of the country," Becker said. "So based on the fact that Trump had a different point of view, and that news media outlets were reporting this, that became the basis on which Carter Page, a volunteer in the campaign, should also be suspect."

"That represents, I would say, a grave danger and a chilling headwind for people who engage in political speech; for people who may have a different point of view from the consensus of the US empire or the neoconservative establishment," Becker said.

"We have to laugh," investigative journalist Lucy Komisar told Loud & Clear about the FISA warrant against Carter Page. She added that part of the reasoning for granting it was that "Russians have a history of interfering in other countries and in their elections," and that Carter Page was maintaining business contacts with people in Russia.

"If you want to go back to post-World War II, when the Americans interfered in the Italian election, the US government has conducted about 81 electoral interventions in other countries; the Russians did about 36," Komisar asserted.

"And what about overthrowing governments?" she asked. "Iraq, Guatemala, Congo, Brazil, Chile. And what about [former top US diplomat] Victoria Nuland? We heard her on the cellphone talking about how they were going to put their guy into the Ukraine."

"The worst thing is the media taking this seriously," Komisar said. "There isn't any evidence. There's nothing there. There's no there there," she said, adding that the heavily redacted report was blacked out in order to give the impression that the government has some kind of knowledge that they can't release.