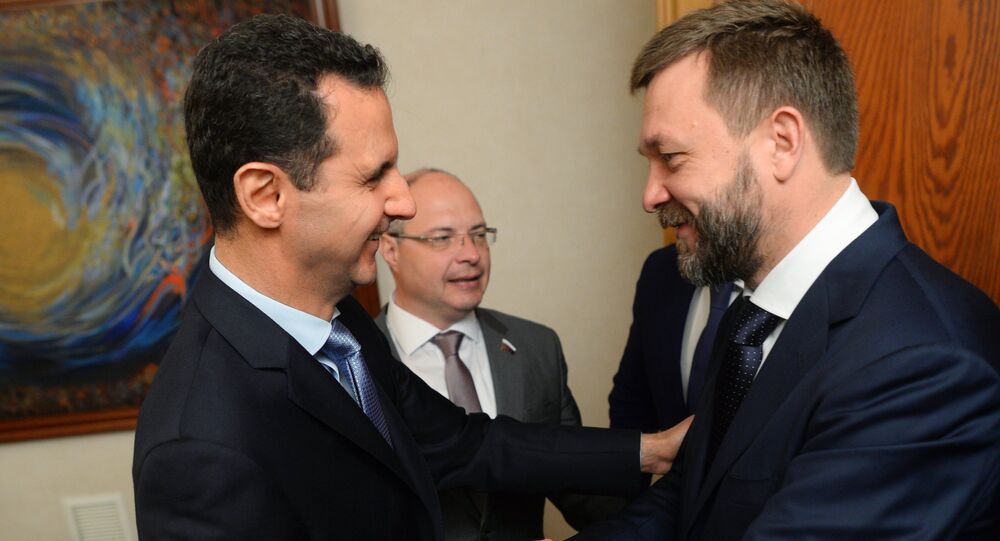 With the next round of Syrian peace talks between Russia, Turkey and Iran confirmed for this month, the long-sought political solution to the Syrian Civil War is one step closer.

However, there still remain major challenges to the successful political resolution of the Syrian conflict.

Just recently, US National Security Advisor John Bolton stated that the US will continue to deploy its forces in Syria to counter Iran's alleged presence.
To discuss Russian and American approaches to the peace process in Syria, Sputnik sat down with Dmitry Sablin, a senior MP and Chairman of the Group for Cooperation and Friendship between the Syrian Parliament and the Russian Duma.

Sablin, who has just returned from his 18th trip to Syria, stressed that honest cooperation and dialogue, not unilateral aggression and double standards, are the key to resolving the conflict and offered three lessons for the US to learn about peacebuilding in Syria.

According to Sablin, the single most vital lesson for the US to learn about peacebuilding is that it is impossible to resolve the Syria conflict solely by force.
The MP's latest trip to Syria was devoted to the promotion of multi-level socio-political cooperation between the Syrian Arab Republic and Russia as well as the delivery of humanitarian aid.

"It is absolutely essential that the military victories, achieved by Syrian forces with the help of the Russian Airforce, are backed by the development of socio-economic ties between our countries," the MP stressed.

"The development of such bilateral ties is the principal objective before the Russian and Syrian governments. Our parliamentary delegation to Syria aims to further develop these relations on both national and regional levels."

Sablin pointed out that one of the main goals of his latest trip was to negotiate the roadmap for the realization of an agreement for cooperation between the ruling United Russia and Ba'ath parties, which seeks to enhance the peace process in Syria.

© REUTERS / Ammar Abdullah
Last Residents Evacuated from Pro-Assad Towns in Northwestern Syria - Source
Syrian President Bashar al-Assad, who welcomed Sablin during his visit, highlighted the effectiveness of the agreement, some provisions of which have already been realized.

During the trip, the Russian parliamentarians also met with Syrian religious leaders and stressed the importance of the de-radicalization of the country via enhanced cooperation between the youth groups as well as the counter-extremist campaigns.

Finally, Sablin met Syrian First Lady Asma al-Assad to discuss the on-going delivery of humanitarian aid to Syria from the Russian NGOs, including the Battle Brotherhood, of which Sablin is Deputy Chairman.

This heavily contrasts with the heavy-handed US approach in Syria, which has been branded as "counterproductive" by the MP.

"During its aerial campaign against ISIS [Daesh], the US often ignored humanitarian considerations and purposively bombed civilian infrastructure, leaving significant problems for others to solve", he stated.

In March, President Donald Trump froze some $200 million in essential humanitarian aid to Syria, even to the regions, which are currently under the control of US-backed militants.

The MP also highlighted that it was unproductive to channel the much-needed aid to "questionable groups", such as the White Helmets, which is frequently accused of staging fake attacks on civilians in order to blame the Syrian government and provoke a reaction from its Western backers.

In 2016, the group faced a significant backlash for participating in the so-called "Mannequin Challenge," whereby it staged an attack on civilians to "raise awareness of the suffering of the Syrian people."

"In contrast to the hypocritical Western ‘humanism,' which is used as a cover for aggression, Russia and its people really help Syria. For instance, the "Battle Brotherhood has been delivering humanitarian aid to the Syrian people, helping orphans and refugees ever since the start of the war."

According to Sablin, the principal obstacle to the global efforts to bring about the end to the war in Syria is the US policy of double standards, which has consistently undermined the fight against international terrorism.

"When we were visiting Syria in May 2015, ISIS [Daesh] was storming Palmyra. The IS militants deployed in an open field just outside of the city; you could see them as bright as day. Not a single American bomb was dropped on them, and Palmyra fell," the MP stated.

The capture of Palmyra was one of the most important psychological victories for ISIS [Daesh].

It took the combined strength of the Syrian Army and Russian Airforce to finally dislodge the terrorists from Palmyra in 2017, but not before the terrorists had destroyed priceless antiquities at the UN World Heritage Site.

"Consequently, when the US government is talking about eliminating some terrorist commander or winning some battle, I remain sceptical about whether this will actually contribute to the fight against terrorism", the Deputy continued.

The legislator pointed out that "if the US had been serious about combating terrorists, it would have restricted the flow of weaponry and ammunition to Syria long ago."

Throughout the course of the Syrian Civil War, numerous US-backed rebels defected to ISIS [Daesh] and the al-Nusra Front (now Tahrir al-Sham), and the American weapons often ended up in the hands of terrorist groups.

© AFP 2020 / Giovanni ISOLINO
Russia Effectively Manages Issue of Syrian Refugees Unlike EU – Belgian Lawmaker
Sablin, who holds the rank of the Colonel in the Russian Armed Forced, noted that such mistakes on part of the US military are suspect.
The MP also described the recent reports of a US role in the evacuation of ISIS [Daesh] militants from Raqqa and Deir ez-Zor as "highly disturbing, but not unsurprising".

At the same time, Sablin pointed out that Russia has taken an honest and well-defined position in the Syrian conflict upon which it is seeking to build relations with all key players in Syria to combat terrorist groups and reach a political solution to the conflict.

The Deputy stressed that this approach is already producing substantial results on the ground in Syria.

"You can physically feel that it is easier to breath in Damascus now, ever since the terrorist enclaves in Eastern Ghouta and Yarmuk had been cleared out", he said in reference to his latest trip.

"Our negotiators at the Centre for Reconciliation [… of Opposing Sides in the Syrian Arab Republic] are the real heroes, who saved numerous lives", Sablin stated.

The MP praised the Russian officers, who went unarmed to meet militants besieged in Eastern Ghouta, convinced them to surrender, relieving pressure on civilians in the area.

"This vital work is currently being carried out in southern Syria", he said.

Finally, Sablin stressed that the unilateralism on part of the US and its closest allies will neither solve the Syrian Civil War, nor will it result in the ousting of Bashar al-Assad, a long-sought goal of the Western coalition.

Sablin, who was present in Damascus during the US-led airstrikes against the Syrian government this April, pointed out that the attack did not achieve the goal of destabilizing the political situation in government-held areas, but in fact had a unifying effect on the population, who rallied behind the Syrian President.

"At 6 am, there was a massive celebration on the central square in Damascus, people were cheering the successful repelling of rocket attacks launched by the international coalition."

"The Syrians were dancing on the roofs of the cars, waving flags. The success of their air defenses brought back a sense of security, despite the attacks by the US and its allies," Sablin stated.

The MP also said that when he met President Assad the next day after the attacks, the Syrian President was in an unprecedentedly joyous mood.
Sablin dismissed claims by US officials that the airstrikes hit all the objectives, stating that the Syrian air defenses intercepted the vast majority of rockets.

"There is a clear difference between when the rocket blows up mid-air and when it hits the ground object. When the interceptor missiles hit the rocket, that's about 500kg of TNT, there is such a deafening noise that it is impossible not to wake up", the retired colonel said.

According to Sablin, the failed missile strikes also facilitated the surrender of the remaining militants in Eastern Ghouta.

© REUTERS / Ronen Zvulun
Israel Acts as US Proxy in Syria By Escalating Strikes on Iranian Infrastructure – Report
The MP concluded that the humanitarian situation will be "even more favorable after the withdrawal of all those who are present in Syria illegally".
In this, the Duma Deputy echoed Russian Foreign Minister Sergey Lavrov, who branded the Pentagon's statement that the US is lawfully present in Syria due to the UNSC mandate, as "absurd".

At the same time, Sablin reiterated that Russia has always been open to constructive and open dialogue, stressing that this cooperative approach and not US unilateralism is the key to successful conflict resolution in Syria.