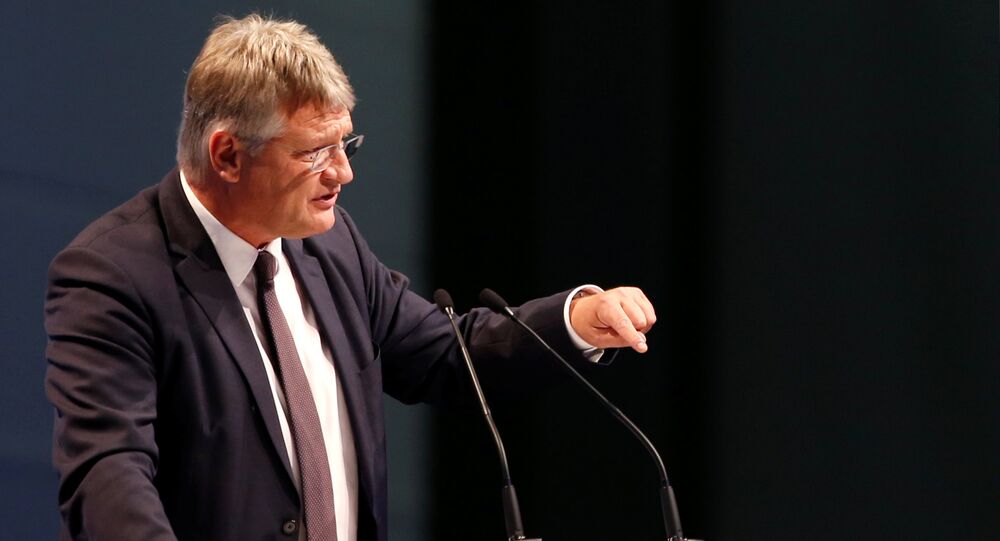 This week, Alternative for Germany Chair Joerg Meuthen visited Russia to attend the seventh international youth forum "Engineers of the Future." In an interview with Sputnik, the German politician revealed what he thinks of his party's chances to come to power as well as expressed his viewpoint on Europe's prospects for solving its refugee crisis.

Sputnik: US President Donald Trump has severely criticized the Nord Stream 2 project, calling it a “mistake by Germany.”  Washington accused Berlin of paying billions for Russian gas while at the same time relying on the United States to defend it as an ally in NATO, and requested an increase in German defense spending. Do you think Germany will comply with the US demands?

Joerg Meuthen: I believe that President Trump is now mixing two things that do not belong together. I can understand President Trump if he is not happy about the Nord Stream 2 project, because it is in the interests of his country to sell its own gas, which the US extracts from fracking and then sells to Germany. But as for us Germans, we have to represent Germany’s interests and the Nord Stream 2, which is more appealing to us, definitely serves them. Contracts have been signed, everything has been prepared. It is in Russia's interest, it is in Germany's interest and the project will be implemented and we cannot accept the position of the US.

Sputnik: In the refugee dispute between the CDU (Christian Democratic Union) and the CSU (Christian Social Union), German Interior Minister Horst Seehofer set an ultimatum for Chancellor Angela Merkel and gave her two weeks to change the course of her migration policy. Was this a real threat or just a political bluff?

Joerg Meuthen: Partly yes and partly no. Seehofer is actually trying to regain credibility concerning the stricter migration policy. However, he understands that the government will fail to implement it. It is not feasible with the CDU, it is not feasible with the Social Democrats. And he still proposes concepts that he knows cannot be realized. In that sense, it's a bluff.

© AFP 2020 / Christof Stache
Majority of Germans Consider Country’s Migration Policy Too Careless – Poll
Sputnik: Since the start of the migration crisis in 2015, there were practically no decisions made except for the closure of the Balkan route and the EU-Turkey agreement of 2016. In your opinion, what could compel the countries of Europe to agree on joint solutions?

Joerg Meuthen: I'm not very optimistic that they will do that. We have European allies in the strict migration policy that we advocate. We have allies in Italy with Salvini, in Austria, in Hungary, in the Visegrad Group as well. But it's not the majority and I do not think we'll have the majority soon, and as there is no European solution, we’ll have to do it at the national level.

Sputnik: Alternative for Germany achieved stunning success in the wake of the 2015 migration crisis; what else, apart from the immigration agenda, can make this breakthrough last, from a long-term perspective?

Sputnik: And how likely do you think it is that Alternative for Germany will come to power?

Joerg Meuthen: I think we need to be patient. I also believe that we will not be able to make it alone. We will probably need a coalition partner, but we are not going to form a coalition by all means. We will only build a coalition when the time comes, and we will really be able to translate our political ideas into certain laws. And it will not be next year, as I suppose it will take a little more time. We must be patient.