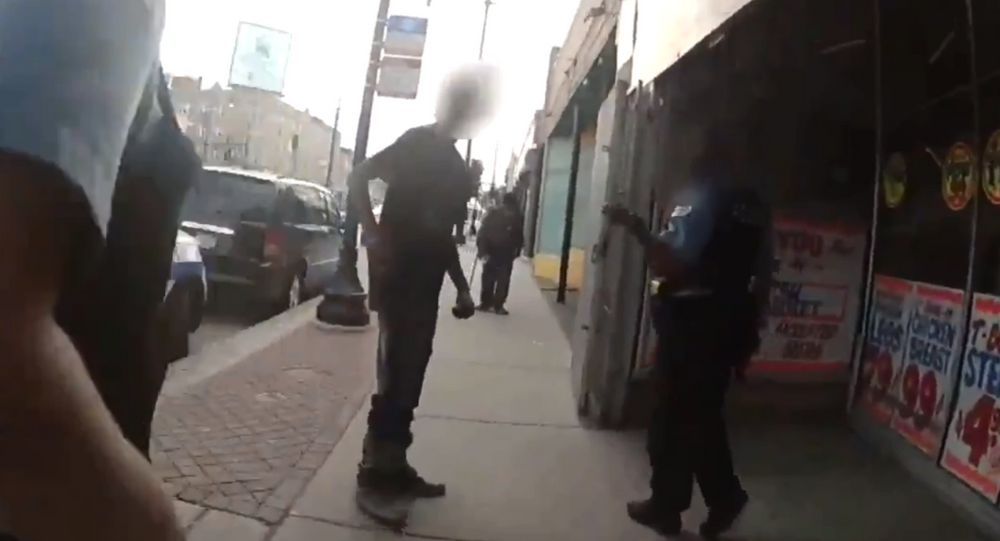 The Saturday killing of 37-year-old Harith Augustus by an officer with the Chicago Police Department (CPD) and the force’s response to the mobilization of community demonstrators emphasizes the city’s continuous policing problems, Kina Collins, CEO and Founder of Chicago Neighborhood Alliance, told Sputnik.

Augustus, who was also known as "Snoop" in the neighborhood, was killed in Chicago's South Shore community. Bodycam footage released Sunday shows officers approaching the local barber and lifting up his shirt, a move that quickly revealed he was carrying a firearm. Augustus moved away from approaching officers and was killed after an unidentified cop shot him seven times.

Although hundreds of protesters gathered at the site of the shooting to peacefully demonstrate against the CPD, violence broke out and led to several arrests.

​Collins told Radio Sputnik's By Any Means Necessary on Monday that the police department's response puts a spotlight on its continuous abuses of black and brown communities in Chicago.

"There was a lot of agitation that was happening on the part of the CPD, there were very aggressive cops who were agitating the crowds and basically egging them on in a lot of ways," Collins told host Eugene Puryear. "I think that's dangerous when we're talking about an already ignited situation."

"People have to understand that… this is a continuous relationship with the Chicago Police Department where they are abusing our community profusely, and people are fed up with it," she added.

Footage uploaded on Twitter shows officers shoving protesters past barricades and onto the ground, swinging their batons and chasing demonstrators to a local shopping center.

​The US Department of Justice issued an announcement in January 2017 stating that investigators had found evidence proving the city's law enforcement officials had inadequately trained their officers, allowing a practice "of using force, deadly force, in violation of the Fourth Amendment of the Constitution."

"The pattern or practice results from systemic deficiencies in training and accountability, including the failure to train officers in de-escalation and the failure to conduct meaningful investigations of uses of force," the release noted.

Fellow guest Aislinn Pulley, an organizer with Black Lives Matter Chicago, chimed in on the conversation and painted a picture of what took place at the weekend protests.

"The community immediately responded in outrage — in justified, righteous outrage — and stayed in the area where [Augustus] was killed. Police barricaded them in and then proceeded to brutalize them after about three hours of community protest," Pulley said. "They walked over the barricade that they set up themselves and beat people with batons, ripped people's shirts, chased people with guns drawn, called people all sorts of names, derogatory names and basically further terrorized the community."

"The community then responded by remobilizing and marching from the site of the murder to the police station, where people had been detained and held there," she added.

​Pulley later told Puryear that what's taking place in Chicago is the "result of decades of divestment from the black community by many — multiple — administrations."

According to the Chicago Tribune, Chicago Mayor Rahm Emanuel's 2018 budget plan directed $24 million to the police force for training and community policing expansions, an addition to the millions that the department was already set to receive as part of Emmanuel's 2016 pledge to hire new officers.

"The narrative that is being propagated, that intra-communal violence is a cause of poverty and that somehow black people are to blame for the condition we are put in, is a lie," she said. "It's a way to cover up what is actually happening, which is that there has been systemic divestment from our communities."

"Our communities are being systematically driven out of the city… the affordable housing that we used to have has now been turned into condominiums, gentrifying our neighborhoods; we no longer have jobs, and the answer to that, instead of providing what the community and what the people actually need — which is affordable housing, jobs, health care and high quality education — is to put that money, that should be going into our community, into policing," she continued.

"And what the police then do is create violence and occupy our neighborhoods in order to suppress the unrest and the anger that people feel at the unjust condition that we are forced into."

Pending an investigation, officers involved in the shooting have been placed on administrative leave for 30 days, according to Vox.