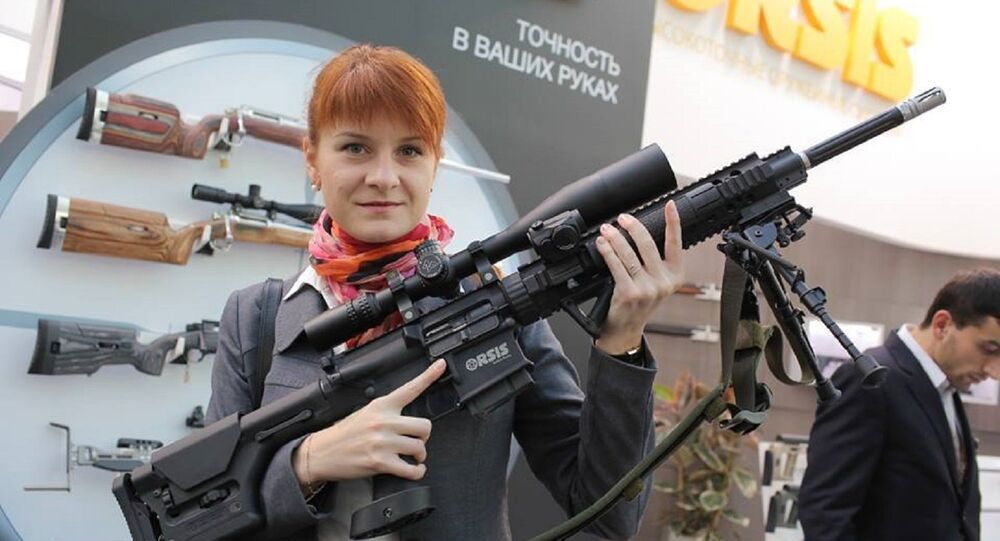 Russian national Maria Butina, 29, was charged Monday by the US Department of Justice (DOJ) with conspiring to act as an agent of the Russian Federation within the United States, a criminal allegation that may be designed to draw attention away from Monday’s meeting between the US and Russian heads of state.

"Maria Butina is not an agent of the Russian Federation," attorney Robert Driscoll, Burtina's legal representation, said in a statement obtained by Sputnik News. Driscoll is the former deputy assistant attorney general and chief of staff, Civil Rights Division, of the US Department of Justice. "She is a Russian national in the United States on a student visa who recently graduated from American University in Washington, DC," he said.

While allegations that Butina illegally lobbied in the US come amid fervor from Democrats, the intelligence community, and the mainstream media over Mueller's latest indictments and friendly comments made by US President Donald Trump at a joint press conference with Russian President Vladimir Putin in Helsinki, Finland, Mueller "has not expressed interest" in allowing Butina to interview him as she has requested, according to the statement from Driscoll.

She has, however, testified in front of the Senate Select Committee on Intelligence for eight hours and produced thousands of documents, according to her lawyer.

"Court filings detail the Russian official's and Butina's efforts for Butina to act as an agent of Russia inside the United States by developing relationships with U.S. persons and infiltrating organizations having influence in American politics, for the purpose of advancing the interests of the Russian Federation," a Monday statement from the DOJ says.

The crux of the allegation against Butina, who recently completed a masters degree in international relations, is that she acted as an unregistered foreign agent, communicating with a Russian official via email and Twitter direct messages, according to the indictment.

Her overt acts in furtherance of the conspiracy include emailing a US "person in an effort to develop, maintain, and exploit a relationship," emailing another US person to "organize an event for the purpose of influencing the views of US officials," and acting as a foreign agent while she attended American University in DC.

Fault Lines host Lee Stranahan, speaking from Helsinki, said that the indictment over alleged failure to inform the US Attorney General of her lobbying is to be expected from the DOJ. "We've had a situation where you see people arrested for ‘driving while black,' right? That's a thing that's happened if you're an African American in [the US]. Now what we're seeing is ‘politicking while Russian.' And the reason I say that is because we've had statements by [former Director of National Intelligence James] Clapper as well as by [former FBI Deputy Assistant Director and current agent Peter] Strzok that can only be described as racist. The former ODNI talked about Russians' genetic propensity. You couldn't say that — there's literally — I can't think of another nationality you could say that about without everyone going, ‘Well that's the most racist thing I've ever heard.'"

Strzok originated the FBI investigation into collusion between the Trump campaign and Russia on July 31, 2016, and became the lead investigator, according to Congressman Trey Gowdy (R-SC). "Then you had Strzok saying he ‘hates the motherf*cking Russians' and talking about them as savages," Stranahan noted.

"The substance of the charge in the Complaint is overblown," Butina's lawyer's statement reads. It characterizes the allegation — the sole allegation against Butina — as rendering it "unlawful for a foreign national student in the United States to develop a personal, professional, or networking relationship with an American, or to attend public events in hopes of meeting US political figures." The statement characterizes the charge against Burtina as a "misuse of the Foreign Agent statute, which is designed to punish covert propaganda, not open and public networking by foreign students."

While the substance of Butina's alleged political interference is not included in DoJ documents — nor their statement accompanying the indictment — clues on the internet stem from a June Mother Jones article that says the political organization referenced in the DoJ statement is the National Rifle Association (NRA).

The NRA has long been been demonized by Democrats over allegations of encouraging mass violence and obstructing reform to the US' permissive gun laws, which they argue contribute to the epidemic of violence, particularly school shootings, in the country. "I think the NRA is telling people to shoot us," tweeted Connecticut Senator Chris Murphy.

According to Russian official Aleksandr Torshin, the man believed to be the one Butina was allegedly working for, he and Butina are lifelong members of the NRA. Butina started a gun rights group in Russia called Right to Bear Arms in 2011 and they have together lobbied the Russian government to those ends, according to Mother Jones.

Torshin was under investigation by the FBI in pursuit of allegations that he helped Russia funnel money into the NRA to help Trump's campaign, according to a January article from McClatchy, although no indictments have been issued to that end and no criminal convictions have been made. In US law, a conviction is secured after an allegation is proved "beyond a reasonable doubt." The evidentiary requirements for an indictment are far lower. Torshin was sanctioned by the US Treasury Department in April 2018.

According to Butina's attorney, "over a dozen" FBI agents raided her apartment in April. She has "offered repeatedly to answer any questions the [DOJ] had," said Driscoll, an attorney at McGlinchey Stafford. "Rather than avail itself of that opportunity the government chose to arrest Ms. Butina on Sunday" without notifying Butina's attorney.