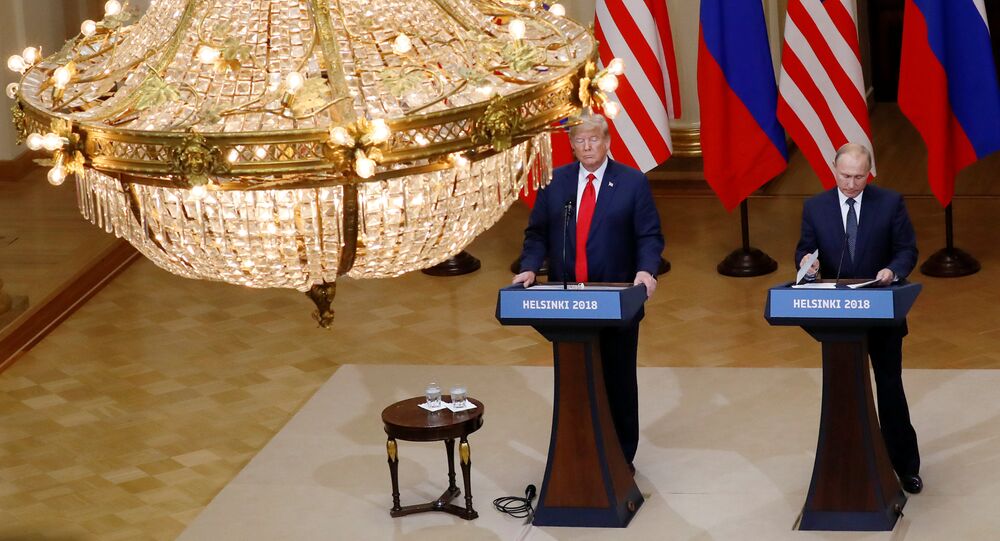 In a historic bilateral summit, Russian President Vladimir Putin met his US counterpart Donald Trump in the Finnish capital. In an interview with Sputnik, Dr. Denis Rancourt, a civil rights advocate and social theorist, provided his insight into the importance of the meeting.

Dr. Denis Rancourt: I don’t think the timing is that important, I mean it had to happen because Trump and the US want it to happen and also Russia wants it to happen. It’s going to happen anyway. The US wants things from Russia and to some degree, the US needs Russia more than Russia needs the US, because the United States in the world has lost a lot of credibility and Russia has credibility. It has a coherent diplomacy, which the US no longer has.

So it needs that credibility…Trump uses the expression “We need to run the world”: what he means by that is that he wants to be able to acquire the benefits of having a collaboration with Russia on certain issues. I think that credibility is one; but there is another important issue that clearly is of concern to Trump and the United States and that is the question of weapons; the democratizing of missiles, especially.

The US would have a lot to lose if more and more nations acquire the possibility of defending themselves against US threats and attacks. And so, the possibility of missiles being given to people who need them, by Korea or by Iran, or even indirectly, or directly, by Russia itself, is a great threat to the United States, because the US system relies on military intimidation and its projection of power in the world.

So, for that to be removed would take away many of its acquired territories and ability to coerce and intimidate economies and large parts of the world. I think those are the things, it’s in that sense that the United States wants kind of a weapons management and understanding that they are going to limit this […] spread of weapons; because it’s not just nuclear weapons. Technology is advancing, and we now have more and more accurate missile that can hit cities that are estimated to be the source of military intimidation. For example, Tel Aviv can be hit by missiles and so on. It’s illustrated by what’s happening in Yemen now.

The Yemenis have rudimentary missiles that are able to hit targets in Saudi Arabia and have demonstrated their ability to take out ships. So, the US is more and more vulnerable to this advancing technology. It relies on projection of power through aircraft carriers, which are themselves, by their nature, vulnerable to missile attacks and to the kind of technology that can easily hit large ships. They need to be able to protect themselves and they’ve lost credibility, especially after the total destruction that they have made in Iraq and Libya. The world has seen this and understands how vicious NATO and the United States can be. I think it’s a combination of those two things that brings Trump and the US to the table, to try to negotiate with Russia.

Sputnik: […] Trump has virtually dismissed reports, even from his own intelligence, on the alleged Russian meddling. What do you think about this?

The views expressed in this article are solely those of the speaker and do not necessarily reflect Sputnik’s position.