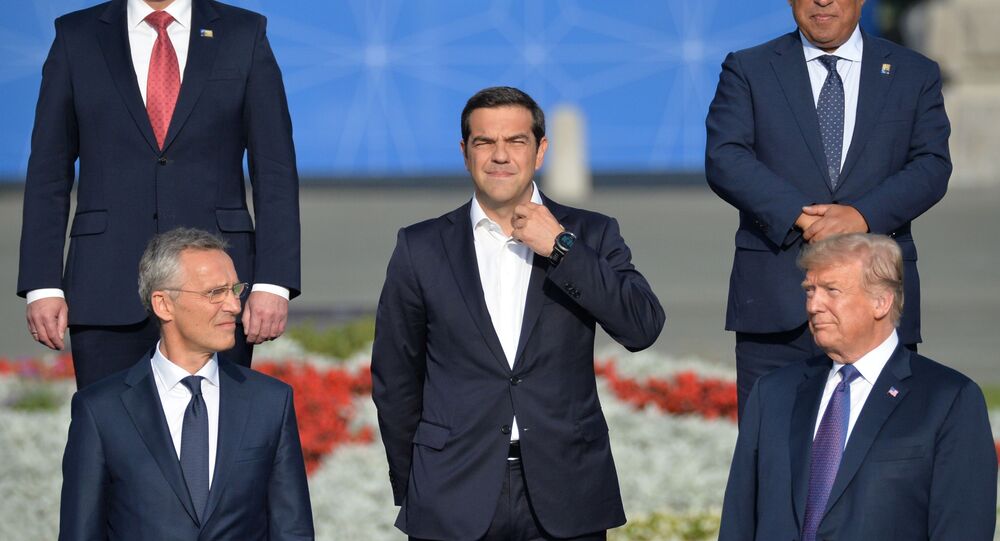 NATO has nothing to do with European defense, it is just a tool of intimidation and a money-making machine for the US' bloated and corrupt military-industrial complex, geopolitical analyst Jon Hellevig told Sputnik, arguing that the latest summit has not indicated any real rift among NATO members – they just don't want to fork out.

"I concur with the many independent geopolitical observers that the NATO is a protection racket to start with and what Trump just did was to up the ante," Jon Hellevig, geopolitical analyst and managing partner of the Awara Group, a leading business administration and outsourcing firm in Russia, told Sputnik. "But I don't see any real rift between NATO allies, it's just about money."

According to the analyst, NATO member states "all enjoy establishing a Western world hegemony and intimidating Russia, but the problem is now that their main sponsor, the United States is in dire economic straits and therefore desperately trying to raise more money for the war machine."

For their part, European NATO members simply do not want to spend more money on the alliance.

Ahead of the latest NATO summit that took place on July 11-12 in Brussels, Trump emphatically tweeted that many European states had failed to meet their 2 percent of gross domestic product (GDP) commitment and demanded that they fork out.

Many countries in NATO, which we are expected to defend, are not only short of their current commitment of 2% (which is low), but are also delinquent for many years in payments that have not been made. Will they reimburse the U.S.?

​Having arrived in Brussels, the US president immediately raised the issue at a breakfast with NATO chief Jens Stoltenberg, lambasting Europeans and most notably Germany for what he called unfair burden sharing.

What good is NATO if Germany is paying Russia billions of dollars for gas and energy? Why are there only 5 out of 29 countries that have met their commitment? The U.S. is paying for Europe’s protection, then loses billions on Trade. Must pay 2% of GDP IMMEDIATELY, not by 2025.

​"We are supposed to protect you against Russia but they [Germany and other European countries] are paying billions to Russia," Trump railed, referring to the Russo-European Nord Stream 2 endeavor.

​However, according to Hellevig, "it is ridiculously preposterous of Trump to accuse Germany to use the NATO alliance for taking unfair advantage of the United States for 'the protection of Germany'."

"NATO in its present form, after the end of the Cold War, is not a defense alliance but an aggressive tool for projecting US world hegemony, with the immediate ongoing task to achieve military domination over Russia and tightening the noose at Russia's borders," the geopolitical analyst said. "Thus, far from protecting Germany or anybody else in Europe, the United States, has practically occupied Germany — in fact, very much so since the end of WWII — and is using the country as a platform for its global aggression."

Boosting Spending to 4% of GDP

Trump's claim that the alliance's member states should boost their spending to 4 percent has prompted a heated debate and protests from French President Emmanuel Macron, who insisted that Paris would not go beyond the 2 percent mark.

​"As I said, at the end of the day, this is all about money," Hellevig stressed, commenting on the issue. "The Deep State, the elites who control the United States and its president demand more and more for their insatiable military-industrial complex, but with the crumbling economy, the already deficit ridden US federal budget has long ago reached the absolute limits on war spending. This is why the Deep State has unleashed Trump on the NATO vassals to collect the money from them."

© AFP 2021 / Tatyana ZENKOVICH / POOL
Trump Jeopardizes NATO Countries’ Security - German Foreign Minister
The geopolitical analyst referred to the latest study by the Awara Group that found that the US debt-to-GDP ratio may reach 140 percent by 2024, while the net increase in debt could be as enormous as $10 to 15 trillion between 2019 and 2024.

"My analysis of the US economy and the very bleak federal budget projections convince me that the US establishment is absolutely desperate and are furiously looking to dip to the allies' pockets for raising the money for their world hegemony project as their own sources have dried up. We must understand that the American talk about [the] need to increase military spending ultimately means that the allies must spend more on [the] purchase of American weapons," the analyst pointed out.

According to Hellevig, 4 percent of GDP actually shows the levels "the US establishment desperately needs to achieve given their present worldview."

He opined that the US military industry has already fallen seriously behind Russia in a number of cutting-edge technologies, while the US federal budget apparently has not got enough money to satiate "the bloated and corrupt military-industrial complex's" appetite.

Trump's pressure and harsh rhetoric is quite understandable, because the situation is really "desperate," the analyst said.

"The US economy is teetering on the brink of ultimate collapse, but the war machine must be fueled," Hellevig highlighted. "This is a big risk gamble which might backfire as more and more people in Europe will understand that the NATO is just that, a protection racket. There is absolutely no Russian threat to Europe, and the more Trump rants and raves about it the more evident the hoax becomes."