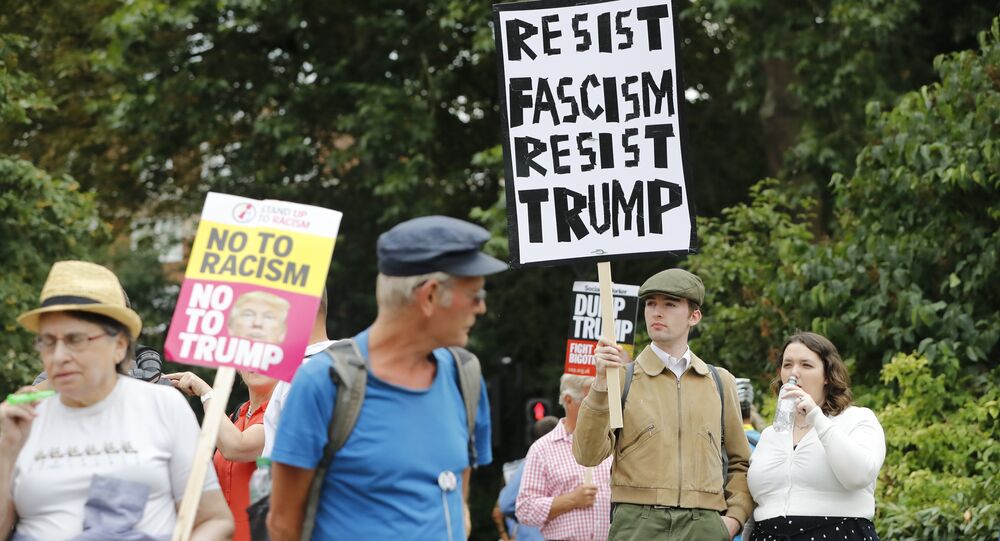 LONDON (Sputnik) - US President Donald Trump is trying to reaffirm the US influence over London with his visit to the United Kingdom, at the time when the two countries' special relationship appears to be limited to some military operations abroad, Shabbir Lakha, a spokesman for the UK protest group Stand Up to Trump, told Sputnik.

"I think there's a number of reasons he's come here, although most importantly this all goes back to the question of the special relationship between Britain and the US… I feel that Trump is here to reassert influence on Britain and British policies," Lakha said late on Thursday, while at the scene of protests outside the London residence of the US ambassador to the United Kingdom, where Trump was spending his night in the city.

The reassurance is needed because May wants to preserve the idea that the two countries have a special relationship, but the reality shows that this relationship is limited to military operations across the world, the group's spokesman argued.

"In reality, we can see that this special relationship only exists through common military interests and the ability to do interventions around the world. And we saw just a couple of months ago that Theresa May — without any democratic mandate or approval from Parliament and at the whim of Donald Trump — took part in bombing Syria, and this just shows us that British foreign policy is made in the US," Lakha said.

© REUTERS / Peter Nicholls
Huge ‘Trump Baby’ Flies Over London Amid Protest Against US President’s Visit (VIDEO)
The US leader flew to the United Kingdom on Thursday, directly from a NATO summit in Brussels. Trump attended a black-tie dinner at Blenheim Palace with UK Prime Minister Theresa May on the same night. The US president is expected to discuss a number of foreign policy issues, including trade, with May on Friday and to meet the Queen.

In April, the United States, the United Kingdom and France launched airstrikes at Syrian government facilities over the alleged use of chemical weapons by Damascus, which was denied by the country's authorities.

The protest group spokesman was speaking as hundreds of protesters assembled outside the now fenced off residence of the US ambassador at Regent's Park, London. The property, otherwise known as Winfield House, had been surrounded by steel fences and concrete barriers erected by London's Metropolitan Police in a bid to keep demonstrators at bay.

At times appearing stoic and unimpressed, police officers were nevertheless clearly visible behind extensive fences that ensured a sizable distance between the residence and the public.

Yet protesters were determined to make their presence known, banging drums and blowing whistles in a protest designed to keep the president awake throughout the night.

READ MORE: Political Researcher Explains Why May and Trump Will Need Each Other in Future

The gathering may have been relatively small, but many more are expected to participate in the protest on Friday. A mass demonstration is already planned by various groups to march through the capital, culminating in what is expected to be a popular denouncement of the controversial US president in Trafalgar Square.

"Our aim is to send a clear message to Donald Trump that he's not welcome in Britain. His views are everything we stand against and the policies he's put in place are harming millions of people not only in the US and globally… So for those reasons people are angered and outraged at the things he's done and said, and that's why people are so passionate about coming out in protest and vocally and visibly opposing him," Lakha told Sputnik.

© AP Photo / Matt York
Trump's Request to Expand Detention of Migrant Children Reportedly Rejected
Some of Trump administration's most controversial policies concern immigration, including the zero-tolerance approach, introduced in April, which resulted in undocumented migrants being separated from their children. The policy was faced with public outcry not only in the United States but across the world.

Trump's decision to introduce tariffs of 25 percent on steel and 10 percent on aluminum imports even for close allies, such as EU members and Canada, was also met with criticism. May told the US leader in June that the levies were "disappointing," but then decided to push for exemption with the European Union, rather than separately.

The views expressed by Shabbir Lakha are those of the speaker and do not necessarily reflect those of Sputnik.