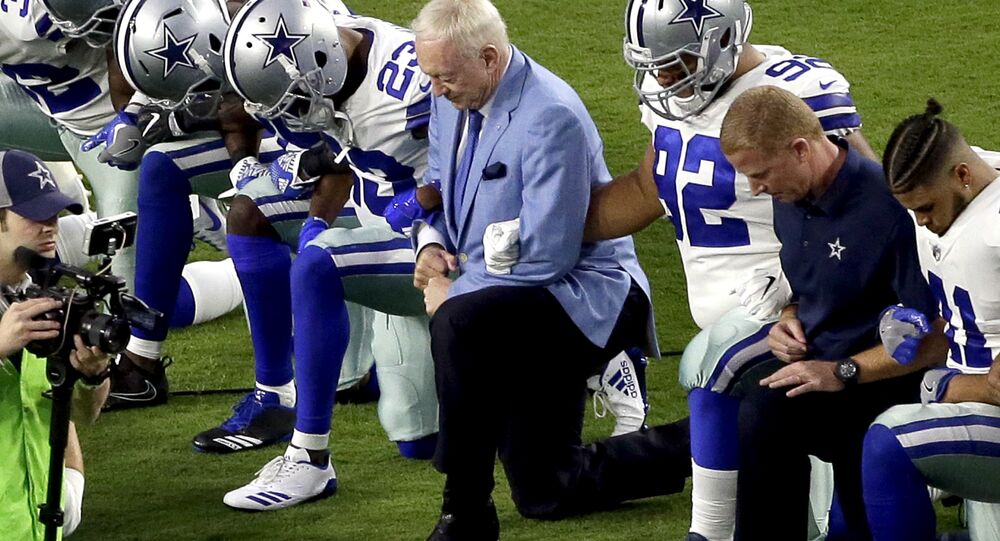 The NFL Players Association has filed a complaint against the league's new national anthem policy. The move comes following protests last year, when players knelt down during the anthem. Sputnik spoke with Breana McCoy, Researcher at the University Of Swansea and Stephen Wagg Professor Of Sports Studies at Leeds Beckett University for some insight.

Sputnik: Do you believe that at sporting events the national anthem should be sung or is this example of how sport is becoming too politicised?

© AP Photo / Matt York
NFL Rejects Super Bowl Ad Asking Players, Audience to Stand During US Anthem (PHOTO)
Stephen Wagg: Who could have foreseen an incident like these 10 or so years ago? I think it tells you a lot of things about America and the state of American society, rather than specifically about American sport. If you look at recent history after the bombing of the World Trade Centre, there was a real increase in nationalist sentiment surrounding sports in the states. Now you have the President of the United States more or less at war with one of the countries’ leading sports and its practitioners. That to me is quite mind-blowing really.

The people who run the NFL are very concerned about image and sponsorship, which are key considerations in contemporary elite sports, but what you’re hearing through the NFL players is the voice of Black America.

Life for black Americans has been getting steadily worse since the Reagan administration; we’ve seen a large-scale obliteration of civil rights. Their anguish won

© AP Photo / Matt York
NFL Teams Unanimously Approve New Anthem Policy
Breana McCoy: Telling people what they can and can’t do during the national anthem is a complicated issue. The protests are also arguably a form of patriotism, but not in the way the current administration wants it to be seen.

President Trump’s opinions and emotions should not be placed above those of the players, just because he is the President. I understand the sense of pride that Trump and many Americans feel about being American, but the reality is that there are injustices going on. There are many different narratives going on regarding the issue.