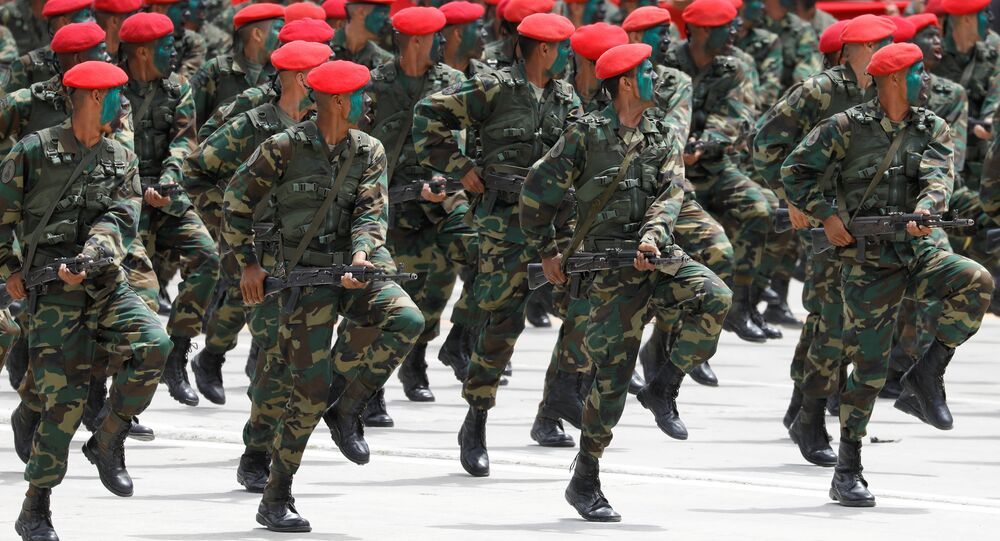 A Deeper Look Into US Military Interference in Venezuela

On the eve of Venezuela's Independence Day, which was celebrated on July 5, a news report published by AP, specifying Donald Trump’s remarks on invading Venezuela, has once again raised concerns in the Latin American country.

Sputnik: A few days ago, The Associated Press published an article about a meeting in the White House in 2017, in which Trump discussed the possibility of military intervention in Venezuela. Do you think this development is possible?

Jesus Mieres Vitanza: Military intervention by the United States is quite possible in the short, long and medium-term perspective. Nevertheless, this option corresponds only to the political paradigm that is gradually changing.

© AP Photo / Andrew Harnik
Trump's Venezuela Invasion Idea Likely Shared by His Administration - Activist
By this I want to say that, according to the paradigm that some authors classify as Post-Westphalia, US intervention in the affairs of Venezuela will not only be military; since 2001, the very idea of war has changed from a strictly military case to one whose nature can be connected with some other dimension.

In this regard, we must ask ourselves the question, has the United States already intervened in our affairs? I would say that yes, they did, and military intervention would be just another means by which the US attacks Venezuela. However, the military operation would cost Washington dearly, since such actions would further aggravate the crisis of US confidence and leadership in the Latin American region.

Sputnik: What can be the reason for military intervention?

Jesus Mieres Vitanza: After the publication of the book by Michael Hardt and Antonio Negri "Empire" in 2000, it became clear that the existence of a transitional phase of imperialism was real. I mean that at present there is an empire created by the United States that transcends its geographical boundaries and functions in close connection with the strategic political allies of the United States and various multinational companies.

© REUTERS / Jonathan Ernst
Trump Repeatedly Suggested Invading Venezuela, New Report Says
Venezuela with the victory of Hugo Chavez in the 1999 elections became a symbol of this confrontation to the empire. This means that the war that is unfolding here, as resistance to the United States, is seen in Washington as a war against the barbarians.

The nature of struggle that Caracas waged against the United States is a war against the war itself. Therefore, it is important to understand the strategy of various US organizations, agencies and institutions, because they will create a war with special characteristics, where the military component will be only part of a huge tactic.

Sputnik: What conditions should arise for intervention or direct military attack by the US, of which you are speaking?

Jesus Mieres Vitanza: These conditions have already been created. We are a threat because we have values, mentality, goals, ideology and strategic partners that are different from the United States. That's why I say that Washington's interests go beyond the desire to control some strategically important object for them. The point is to subordinate, even ontologically, their will to a nation that is not epistemologically similar to the United States.

Sputnik: What are the implications for Venezuela and the whole region?

Jesus Mieres Vitanza: They have already affected us. And it's not just about the economic effect, the absence of some goods, but also more abstract things. There are already a lot of people to whom the uncertainty of their daily lives has a psychological impact.

That's why I say that the consequences at the local and regional levels are devastating. In principle it is because we are experiencing a stage of pronounced relativism. There are many people, who doubt what is good, what is bad, what is economics, ideology, even war.

Sputnik: Many believe that Colombia will become a platform for the US to attack Venezuela? What role can the Revolutionary Armed Forces of Colombia – the People's Army (FARC) play in this case?

Jesus Mieres Vitanza: It is possible that the US is using Colombia as a platform for this purpose. It is also possible that the purpose of such an operation could be the spread of chaos and the disengagement of the country from the Venezuelan heartland, that is, Caracas.

© Sputnik
Maduro Wins Reelection in Venezuela; Did the FBI Spy on Trump Campaign?
Nevertheless, it is important to analyze the role of various groups and groups operating in the zones bordering Venezuela. This is not just about the FARC, but also about criminal, radical groups, as well as about state structures that operate secretly in this zone. It is necessary to analyze the interests of each of the players.

Sputnik: What do you think, what could be the response of the allies of Venezuela, Russia and China in case of an attack? What should be the scale of aggression, so that these countries become more active? Do you think it possible that they will provide military support? Or will they be limited to diplomatic statements?

Jesus Mieres Vitanza: In the event of military action in Venezuela, Russia and China will actively participate in the conflict, mainly because their trade, economic interests, will be under attack. All politicians and officials of Venezuela are responsible for ensuring that the connection between Caracas and the two countries is strengthened, so that their participation is in favor of Venezuela, and not vice versa.

Sputnik: Will Venezuela be able to respond by military action in the event of an attack by the United States?

Jesus Mieres Vitanza: The country's armed forces are making great efforts to modernize the entire system and maintain it under optimal conditions. But perhaps the most important advantage of Venezuela is to know who its enemy is, to know about all sorts of military scenarios, to provide each of the strategically important regions of the country and formulate a defense doctrine for each of them, to maintain the morale of the military and explain to them what their purpose is.

Venezuela already has a military response to a possible attack by the United States. It is necessary to clearly understand what the center of gravity of the attacking army is in order to quickly end this foreign intervention, guided by the strategic goal of restoring control over the territory and minimizing losses among people and resources.

Sputnik: Do you think that the United States will try to commit violent acts to advance what analysts call “Balkanization” or the destruction of the Venezuelan nation state?

Jesus Mieres Vitanza: I believe that the United States can take any action only to destabilize Venezuela and put an end to the Bolivarian government. However, I believe that first they will try to achieve full control over the territory through various political maneuvers, before dismembering the state. Basically because when the nation-state is destroyed, they take on strategic risks, such as, for example, the participation of powers such as Russia and China in the emergence of new states.

Sputnik: What should Venezuela do to avoid the invasion and to repel it?

Jesus Mieres Vitanza: The army of the country is making great efforts, conducting research on what might be the actions of Venezuela in the event of a military conflict involving a foreign invasion of the country.

However, a very valuable position of the current doctrine is to believe that the US, although it has not yet been meddling, is besieging Venezuela every day to destabilize the nation and create chaos on a large scale. This strengthens the state of unmanageability and justifies what they call the "humanitarian intervention."

The creation of new strategic approaches and even an understanding of the enemy's approaches will help to ensure an effective response from the armed forces of Venezuela in any internal situation that is vulnerable or disturbed by a foreign threat.

The views and opinions expressed by Jesus Mieres Vitanza are those of the speaker and do not necessarily reflect those of Sputnik.